The Untouchables by Jeff Goulding and Kieran Smith 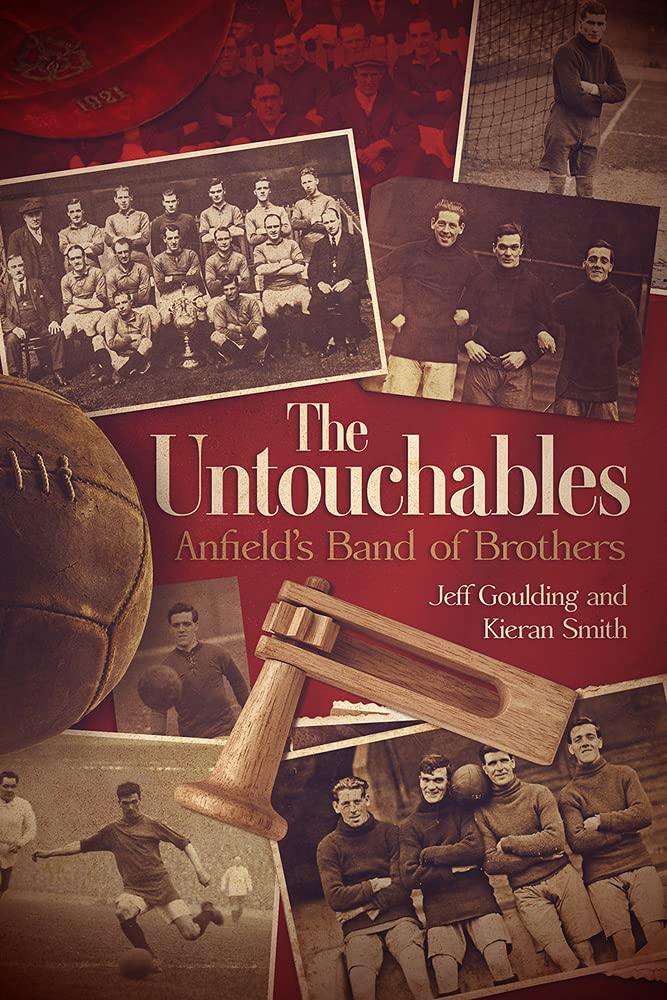 Even the biggest football clubs experience peaks and troughs when it comes to their sporting success; and the further back you go in time, the harder it is to get a real grasp of just how great the achievements where when, for example, Huddersfield Town were English champions three times in a row in the 1920s, a feat which was equalled by Arsenal in the following decade. One of Liverpool Football Club’s own halcyon periods also came in the 1920s when after a finishing position of fourth in the first two seasons following World War One, the club took the Division One title and then retained it, something only The Wednesday club from Sheffield had previously done in the 20th century. Nobody is still alive who saw these champions play in two forty-two match league seasons which saw six men play in 38 or more First Division fixtures in 1921-22 with the same number playing in 40 or more a season later. Dick Forshaw, Elisha Scott and Tom Bromilow appear in both sextets but how much do we really know about these giants of the game or the team-mates who joined them on their road to glory? The answer, sadly, is not too much up to this point because it was only really from the 1960s and onwards that football biographies, autobiographies and annuals started to be published with any regularity until you reach the plethora of publications which are available today and that is without even considering the internet and social media. But even though nobody alive now saw Dick, Elisha, Tom and the others play, they are still remembered by those who knew them as a grandfather, an uncle, a family friend or just someone who was well-known locally for something special he did a long time ago.

The authors acknowledge the extraordinary help given to them by relatives of amongst others and in no particular order Walter Wadsworth, Harry Chambers and Tom Bromilow. Jeff and Kieran also admit that being able to get really close to these men through their surviving relatives was a hugely rewarding as well as revealing experience. Their desire to re-create a bygone but glorious age of “the game, the club and the people” has been spectacularly successful. Although the outstanding Liverpool team of the early-1920s was a cosmopolitan mix of the countries which made up the British mainland and the island of Ireland, choosing to particularly follow the lives of three local lads from the “second city of the Empire” (Wadsworth, Bromilow and Danny Shone) was a master-stroke in that it enables readers to understand that the pride of representing your local team was as important a century ago as it has been to the post-Millennium superstars like Carragher, Gerrard and Alexander-Arnold. The extraordinarily-researched chronicles of the World War One experiences of Walter, Tom, Danny and others like Harry Chambers, Jock McNab and Dick Forshaw would have merited a book on its own never mind combining that with the life of a professional footballer. The Imperial War Museum doesn’t know what it missed out on! These brave men “endured hardships few of us could ever imagine”.

No team in any sport can be successful unless there is also another team behind the playing team. Bill Shankly and Bob Paisley weren’t the first LFC employees to have “surrounded themselves with people who were loyal and who addressed gaps in their own skill sets”. Our co-authors delve into the lives of the 1920s backroom staff as meticulously and comprehensively as they do with any of the players. At a time when being a football manager was very different to what those words are known to mean today, George Patterson had been Tom Watson’s assistant and he was definitely more suited to the administrative side of the game than the playing side. The man who succeeded him, David Ashworth, had had several years at both Oldham Athletic and Stockport County before he arrived at Anfield in December, 1919. Ashworth could see, perhaps in the same way that Shankly could exactly forty years later, “a once great club punching well below its weight” and he relished the opportunity to change that club’s fortunes. The loyal lieutenants he chose to join him on that journey included former players Charlie Wilson and Joe Hewitt, who had both won League championship medals wearing Liverpool red in 1901 and 1906 respectively. Another man, Billy Connell, had been the chief trainer at Anfield during the war years. If they didn’t already know every nook and cranny of Anfield before Ashworth arrived, all four of them soon would!

We would still know very little about these early legends of LFC’s life were it not for the diligent and painstaking detective work carried out for the purposes of this book by Jeff Goulding and Kieran Smith, who have gone above and beyond what we might normally expect from a researcher in getting to learn as much as they could about who these men were, where they came from, what made them tick and what they went on to achieve, which was considerable. As the title of the book declares, they really did become a very special Band of Brothers who earned and deserved the “Untouchables” tag by winning forty-eight and drawing twenty-one of the eighty-four league matches they played during two extraordinary seasons in which they hit the top spot in December 1921 and beat off all pretenders to the crown they craved so much for themselves before, in 1922-23, they led the division from the 6th match in mid-September until the finishing line was crossed in April.

These men must not be forgotten. The first half of the 1920s was an astonishing period in LFC’s life and it is only right and proper that, as we reach the centenary of their achievements, the players’ stories can be told in full at last.