Football hooliganism in England in the last decade

Hooliganism has rarely been associated with the good name of Liverpool FC and a recent study on football hooligans that focuses on the last decade seems to substantiate that LFC fans rarely get into trouble with the law nowadays. Manchester United tops this interesting list and Reds can well remember clashes between the supporters of these two historic teams
but scenes like these in 1985 are a thing of the past. The 1-0 defeat wasn't well-received by Liverpool fans especially with two penalty claims that were quite valid. 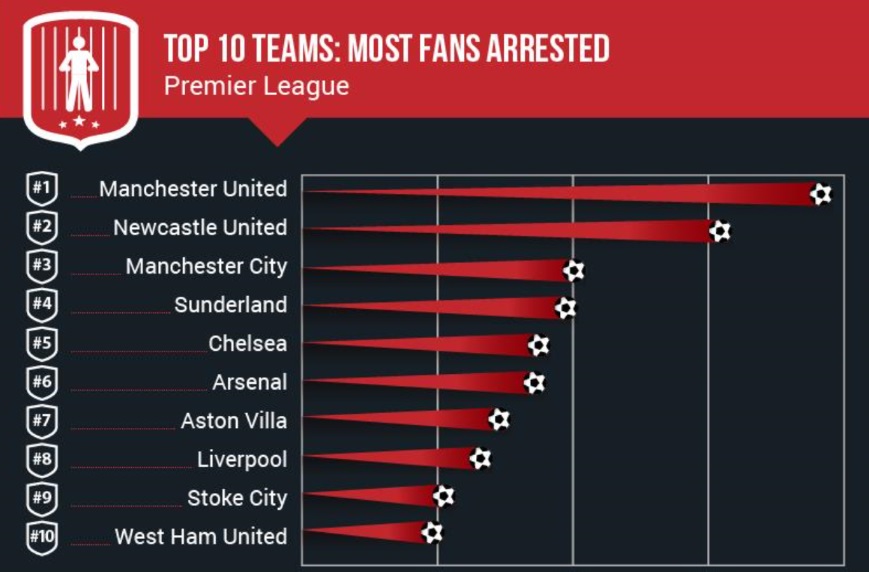 The European Cup final in Heysel that took place two months after the United game at Anfield, blackened Liverpool's reputation in Europe and as a consequence, the club was banned from European competitions for six years. As to further understand the tragedy that took place in Brussels, I would suggest reading this fine book that was written by Chris Rowland from which this excerpt is from:

"We just passed right through the sets of barricades, police didn’t even stop us or ask for tickets. Suddenly we were on our final approach. Away to our right, we could see part of our crowd in one of the terraces, a vast curving sweep of red and white bathed in sunlight. We followed the signs for Blocks X and Y, past the main stand and up a gentle slope. We didn’t quite know what to make of the muffled thud that soon followed, not crisp enough for a firecracker, not metallic enough for clanging gates, not quite like any of the usual football sounds.

Suddenly, ahead of us, a group of supporters came clambering over the wall at the edge of Block Z, shouting and gesticulating. At first, we assumed it was our lot trying to bunk in without tickets and being turned back. More and more appeared, swarming over the wall and charging down the bank towards us. But as they drew nearer, running maniacally towards us, it quickly became apparent they were not Liverpool supporters trying to get in but Juventus supporters getting out. And they were heading straight for us, at speed, maybe a hundred or more. When faced with a number of rival supporters charging at him, the average English football fan’s experience tells him they are not coming for his autograph.

Phil’s eyes narrowed: “Bloody hell, these are coming for us here –– quick, get a brick or something!” The first group arrived but just ran straight on past us, wild-eyed, before barging into some more Liverpool fans behind us. One Italian, wearing a silk scarf like a headband, bandanna-style, launched into a bizarre kung-fu routine with circling hands and trilling noises, before sprinting off with the others. More and more followed, all with the same wild demeanour. Most odd, we thought, not familiar with this type of pre-match behaviour, as we continued towards our entrance, completely unaware of the significance of what we had just seen and heard."

35 years have passed and it is safe to say that Liverpool FC is not known for hooligans but rather their passionate fans who are like no other and continue to uphold the valued reputation of the club all throughout the world.