Dr Robin Gowers has been collecting Liverpool Football Club programmes and memorabilia for over twenty years. He has written numerous articles relating to these for a number of publications including the official club magazine and match programme. He was responsible for a feature in last season's match programme that reviewed a 'valuable' programme in each issue.

Interest in the clubs great history has surged in the last few years. This has coincided with the opening of Liverpool's museum. Having the match programme provides a direct link to the club's past and helps bring alive many memories of both the good times and the bad. 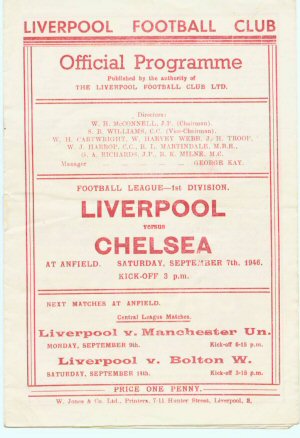 One of the joys of collecting programmes is in obtaining an issue which has extra historical significance because of the events associated with the related match. The first post-war season of 1946-47 saw Liverpool being crowned as Champions of England. Their second home match of this successful campaign saw them face Chelsea.

The club issued a small sized 8 page programme with red print on white paper. Page 2 has a message from the Board Room, which comments on the positive feedback the club had received from their tour of the United States that summer. Who says that foreign tours are a new concept! Some have even suggested that going to America helped the club clinch the championship, as while other clubs remained at home and under strict food rationing, Liverpool's players faced no such restrictions and returned home fully nourished.

This is followed by a full-page article focusing on Liverpool's prospects for the season. The teams' line-ups appear on page 5. The opponents are then introduced by comments about their large number of close season signings which were expected to make them London's leading club.

This match was significant as it saw two important firsts from players who were to become Anfield legends. Bob Paisley made his league debut for the club and Billy Liddell scored his first league goal. Both had played for the Reds in numerous unofficial wartime fixtures. Bob Paisley and Billy Liddell went on to play 277 and 534 times respectively for Liverpool. The game ended 7-4 to Liverpool with just under 50,000 seeing this goalfeast. Programmes from the club's first post-war season are very difficult to obtain in good condition. This and the fact that there are a lot of Chelsea collectors after this issue means that it now sells for around £60 in good condition. It is also interesting to note that near the end of the season the club programme went down from 8 pages to just a flimsy small single sheet of paper that listed the teams and fixtures. This was probably because paper rationing was still in force at the time. These single sheets, due to their fragile nature, are particularly hard to obtain.

For more information on Liverpool programmes and memorabilia please send 2 x first class stamps for the latest bulletin of the Liverpool Programme Collectors Club. This contains many articles on past issues and news on current season programmes. Keith Stanton, 4 Hillview Gardens, Woolton, Liverpool, L25 7XE (0151 42 86 087). The club has been established for over 17 years and exists to promote the enhancement of the hobby and the sharing of information on Liverpool memorabilia between collectors.