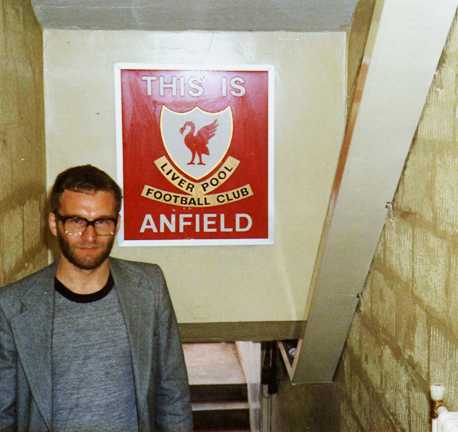 I had been to Anfield before … but only to sit down. In any case my opportunities for going were limited because although my home was between Chester and Liverpool my school was 200 miles away in south-west England. But the day finally came when I was allowed to travel to Liverpool on my own and it was with great excitement that I boarded the bus which would take me from Chester up to Birkenhead. From there I took the ferry across to Liverpool and then another bus up to Anfield from the Pier Head.

I had heard a lot about the Kop, seen it on television of course and observed it during my only previous visit to Anfield. But now I was actually going to stand on it myself. This was in the days before Liverpool attracted a lot of “out of town” supporters, not because there wasn’t support for Liverpool in other places but it took time for Supporters’ Clubs to get organized and arrange transport, etc. In 1969 nearly everyone who attended home games came from the immediate area because I recall that I was the only Liverpool supporter on the bus to Birkenhead and I only met one other fan on the bus going home.

At the start of the 1969-70 season Shankly’s great team of the mid-60’s was just about still going. One or two changes had been made but it wasn’t until the cup defeat at Watford the following March that many of the senior players reached the end of their Liverpool careers. Four wins in a row at the start of the season had supporters already talking about another championship. In the end that proved false but as I walked around the stadium waiting for the gates to open I wasn’t expecting anything but another victory. I deliberately wanted to go in early to savour the atmosphere and not knowing any better I stood right in the middle of the vast terrace. There was a crowd of over 51,000 on that day and I suppose I was a bit overawed by the atmosphere as the crowd built up and kick-off approached. What I hadn’t been prepared for was the sudden movement of the crowd and I quickly learned that you had to keep away from the barrier in front of you because the force of being pushed down into that with several dozen Kopites right behind you could cause some damage. But when the crowd did surge forward there was always the friendly arm of a complete stranger to help bring you back into your former position.

The teams didn’t come out early to warm-up in those days so it was a long wait before they finally emerged to a noise which to me was astonishing. You know how loud it is when you watch from another part of the stadium but it doesn’t really prepare you for the actual volume when you’re in the middle of it. I still remember a lot of the details about that game even though it took place so long ago. Tommy Smith put a penalty away at the Anfield Road end and when Bobby Graham headed Liverpool further in front after the interval it looked like being the easy victory most people had expected. But Burnley had a good side including many players who would go on to better things with other clubs and they hit Liverpool with a remarkable three-goal burst mid-way through the second period. Far from subduing the Kop it only seemed to generate more noise as they tried to get the home team back into the game and when Smith crashed an equaliser past Peter Mellor from the edge of the penalty-area everyone went wild. The volume was turned up even higher as Liverpool chased for a late winning goal but even though it didn’t come the enthusiasm and passion for Liverpool that I experienced from the people around me that day was infectious. I didn’t feel much disappointment that Liverpool had failed to win after being two goals ahead because I was completely drained by the three hours I had been standing there, covered in sweat from the cramped conditions on a hot summer’s day and exhilarated by the noise and the atmosphere. Like a drug I wanted more of it as soon as possible and it wasn’t long before I had finished school and became a regular on the Kop.

This would be most people’s choice because of its importance and the sheer drama of the ending. I certainly couldn’t argue with that and even though I was sitting in the Main Stand that night if these are memories of the Kop rather than from it then I can still include it. There wasn’t much opposition when I checked back through all the games I have seen at Anfield. Although there were many memorable occasions to look back on, nothing could compare to this astonishing evening which saw Liverpool keep alive their dream of winning the European cup, a dream which was to come true a little over two months later.

The club’s previous European cup campaign in Bill Shankly’s last season as manager had ended in disappointment with home and away defeats to Red Star Belgrade. But the new players brought in by Bob Paisley were blending in well with those from Shankly’s reign and Liverpool were emerging as a team well suited to the European game, a fact confirmed by their win in the UEFA cup the previous year. However, St. Etienne were not a side to be underestimated as they had reached the European cup final in 1976, losing most unluckily to Bayern Munich. I had travelled to France for the first leg but we didn’t take nearly as many fans there as they brought to Merseyside two weeks later. The city centre was a mass of colour and noise from lunch-time onwards, especially as thousands of Everton’s fans were preparing to travel for their team’s League cup final reply with Aston Villa in Sheffield. 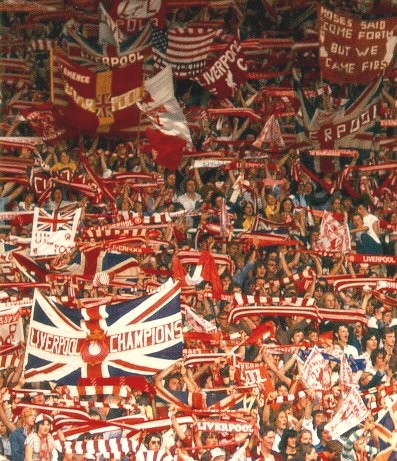 Thousands were locked out of Anfield as the teams took to the field to a deafening reception. But even the most ardent Liverpool fan couldn’t have expected the home team to wipe out the visitors’ narrow advantage with barely two minutes gone, Keegan floating a centre from the left over Curkovic’s head. The Kop, already in great voice before the start, roared their favourites on to get a second goal. But the Reds couldn’t keep up their early momentum and Ray Clemence had to produce a brilliant save to keep Rocheteau out. He did it again in the second half but had no chance with Bathenay’s vicious, swerving shot which put the visitors ahead again on aggregate. The unusual thing about many European games at Anfield from that era was that people in the seats who hardly said a word during league games got really involved and the singing and chanting really was from all parts of the stadium as Ray Kennedy drove Liverpool back into the lead on the night. But it was from the Kop where the most noise and passion came as they willed the team on to the final, decisive breakthrough. That support never lessened even when time was running out but when David Fairclough ran on to Ray Kennedy’s pass and kept control of the ball despite being challenged heavily it was as if the whole stadium held its breath waiting for the outcome. A second or two later the ball was in the Kop goal and 24,000 people behind it were jumping up and down and screaming with joy. Most people in the stands were on their feet for the last few minutes as well as the atmosphere generated by the Kop got through to the whole stadium. When the referee finally blew for the end of the game the noise was probably heard several miles away.

The strange thing was that when we had all calmed down we realised that all that had been achieved on the pitch was that the club was through to the European cup semi-final. Nothing had actually been won yet the initial reaction was as if the European cup had been decided on that night. Although the atmosphere created by over 25,000 Liverpool fans in Rome a couple of months later was brilliant, it’s hard to compare it with the quarter-final because Rome was a neutral venue and, at that time, there was no roof covering the terraces and that can make a big difference to the sound effect. What is certain is that, Inter Milan 1965 apart, there never has been a similar occasion when the Kop showed how much it could frighten the opposition and inspire eleven men on to a famous victory.