Liverpool Captains. A Journey of Leadership from the Pitch 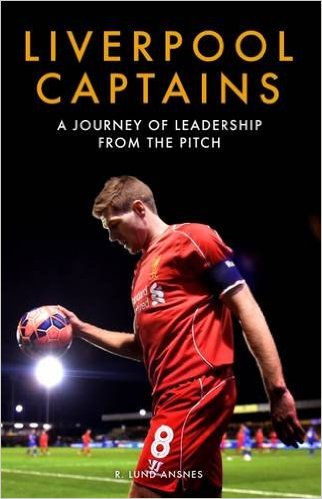 LFChistory.net highly recommends Ragnhild's latest book that focuses on the captains of Liverpool FC. Her talk with the leaders of the club in various spells in history are enlightening and carry great emotional content. It is fantastic to see she is able to include Tommy Smith and Ron Yeats, who suffer from Alzheimer's disease, with the able assistance of their best friends from their days at the club: Chris Lawler and Ian St John respectively.

Liverpool Captains: A Journey of Leadership from the Pitch was recently launched in UK. While working on the book its author, Ragnhild Lund Ansnes, met and interviewed Liverpool FC captains of old and collected a truly unique set of interviews from the men who influenced their teammates and shaped the Redmen for decades. The book gives the reader a chance to look into the club's illustrious history from a new perspective, through the eyes of those players who embodied the Liverpool spirit on and off the pitch.

While Ragnhild Lund Ansnes's name is relatively unknown to general public outside Scandinavia, she's well-known as a journalist in her native Norway. Both Ragnhild and her husband, popular Norwegian musician, Jostein Ansnes of Dadafon and Famntak fame, are Liverpool FC supporters. Ivan Potapov talked with Ragnhild about herself, her latest book and the revelations she made in the process.

Why did you turn your attentions to Liverpool FC and what made you write books about the club?
I am a mother of two who has gone from disliking football to becoming a fanatic fan and the very first woman to write official Liverpool FC books in history (probably the first one in Premier League). It started with me as a journalist needing some answers to why so many fellow friends and Norwegians (including my own husband) are investing so much time, emotions and money into a football team in another country. 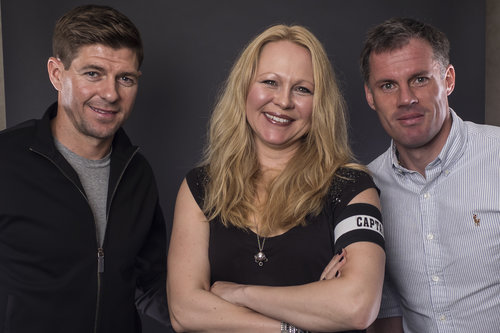 I have travelled to many of LFC's home and away games and interviewed many passionate reds with strong stories about what LFC has done for their lives. It made me realize I had to follow a dream I have had since the age of 5: Writing a book. I spent three years in the LFC supporter environment collecting over 1000 stories and that made me hooked on Liverpool FC too. You can not be so close to such a special club with so much passion without it affecting you. It is a bit like finding Jesus after you turn 30 years old: You become one of the most fanatical ones.

Coming from outside of football and LFC made me different from other football writers and ex-players recommended me and opened doors for me to other Liverpool legends who normally don’t give these kinds of in-depth interviews. That made me write Liverpool FC Heroes, a book about how football has shaped the players and then this new one: Liverpool Captains. A Journey of Leadership from the Pitch.

And how did you come up with an idea to write the latter one, on LFC captains? How long did it take to interview them?
I had already written two books about how the football and LFC shapes people - plus I had been the editor when a Norwegian version of Bill Shankly’s autobiography came out in Norwegian for his 100th anniversary. And the more you know about something, the more curious you get. And the more you realize you don’t know.

I am very interested in psychology and have studied psychology at the university on top of my school of journalism and I was wondering how the role of the captain has changed as the game of football has changed dramatically. I was wondering what it takes to be a captain of the modern football compare to the old days. I was also curious if you can compare a captain to a middle manager in the world of business.

I decided to start a very ambitious project: To interview all the major LFC captains still alive and paint a picture of them as leaders and at the same time give the readers an unique insight into the LFC captaincies over more than 50 years. But it was a bit of a mad project as a quarter of those captains never do these kinds of interviews. 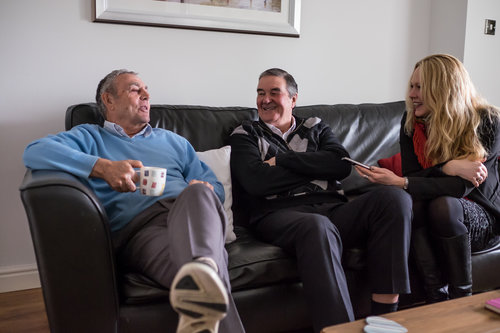 Do you think, there are some skills and qualities making a good captain that evolved over the years? Why do you think they've changed?
The biggest two challenges in modern times is the ability to communicate to all your teammates despite a growing number of nationalities  - so your communicative skills have developed where more non-verbal communication is sometimes needed. Also you need to be able to communicate that every single LFC game means the same, to players with lower loyalty within a larger squad with higher rotation.

There's a long-standing debate what makes a great captain, especially an LFC captain. Have you noticed any traits common for all LFC captains you interviewed? And what makes them different from each other?
All the 16 captains I met and studied are different. Some are a lot more outgoing than others, some a lot more verbal than others, some loving the honour of being the captain as the ultimate climax of their career - others reluctantly became captains, some didn’t care about the extra work of being a captain, others dropped their performances because of that responsibility, some got the captaincy after serving the longest in the club - others got given the captaincy more or less when they got to the club... etc, etc.

But they all had in common they were very good players, all being captains by playing well - they all had that extra inch of will to win and they are all good at reading people - knowing that not all teammates can't be treated the same.

Those are the captains from different eras of the club. Do you think every one of those captains could get an armband under any other LFC manager?
No. The likes of Rush, Barnes and Fowler were not really the typical captains and they wouldn’t have been a captain under Shankly or Paisley - they were captains as a result of many experienced players disappearing from the club and them being among the most experienced ones at the time. But forwards are not ideal as captains.

Had you had any personal prejudgements quashed after you spoke to LFC captains? Were there any moments when they talked and you had "Eureka!" moments because their words shed some light on something you never realised?
Many times! But the strongest of them all was when interviewing Paul Ince. I was unsure to include him because of the unpopular Manchester United connection. But I decided I had to try to include him as he is the only one in modern times that has captained both LFC and Manchester United. Also, he broke some historic ground by being the first black England captain and the first black Premier League manager. He has never shared his story before and thanks to Robbie Fowler, who convinced him he could trust me, he told me a story that made the hairs stand up on my arms. How he went from being an abandoned child to achieving all what he did, made me realize ANYTHING is possible if you work hard, have some talent and meet people along the way that believe in you! 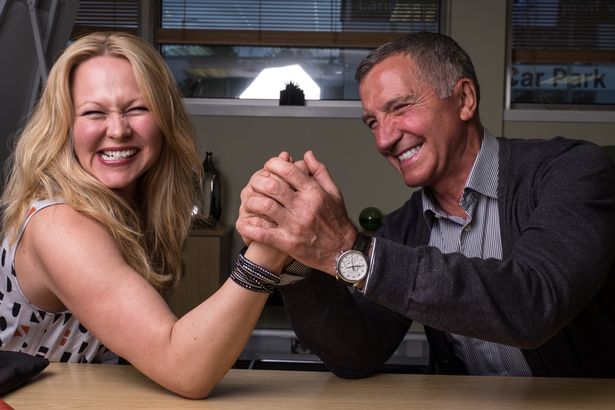 The history of this football club knows clashes of big personalities, for example both Tommy Smith and Emlyn Hughes were great captains and disliked each other or Phil Neal leaving the club after Kenny Dalglish succeeded Joe Fagan as LFC manager. Do you think it's good or bad for a team to have players with such charisma in the squad at the same time?
Yes, I think the competitiveness sharpens their performances. As much as there were battles between Smith and Hughes (especially after local lad Smith lost the captaincy to Hughes) they managed to stay professional on the pitch. The love for the club, their winning urge, their respect for the managers and for the team in general wouldn’t let personal conflicts get in the way of their game. Phil Thompson and Graeme Souness is another example. This comes down to the unwritten rules of The Liverpool Way that was drilled into the players for decades.

You couldn't interview some of the great captains of old, say Alex Raisbeck, Matt Busby or Emlyn Hughes, for your book because they have passed away. If you had a chance to meet one of them, who would you choose and why?
Emlyn Hughes for sure! Sadly he was only 57 years old. I have heard so many things about him - both how much so many people liked him - and how a few disliked him. He sounds like such an interesting, fun character, Crazy Horse… Would have loved to hear his side of the conflict between him and Tommy Smith. 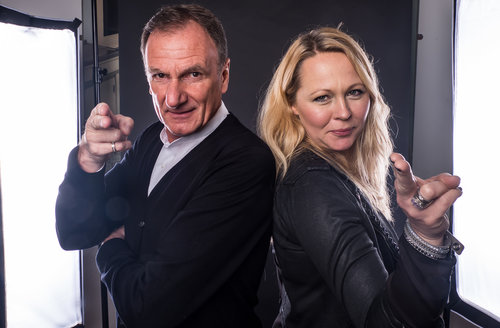 You've said there are so many people who helped you with the book. Could you please add some words about them?
I couldn’t have written this book without the incredible support from the players and former captains of LFC: For Ron Yeats, Tommy Smith, Phil Thompson, Graeme Souness, Phil Neal, Ronnie Whelan, Glenn Hysén, Mark Wright, Ian Rush, John Barnes, Paul Ince, Jamie Redknapp, Sami Hyypiä, Robbie Fowler, Jamie Carragher and Steven Gerrard. Never before have so many of the club's most influential players shared their story in one book. They have been very supportive of my books and trusted me with their personal stories and thoughts. I am extra grateful also for the insight Roy Evans (34 years’ experience in the club) gave me - and all the doors he has opened for me over the years. 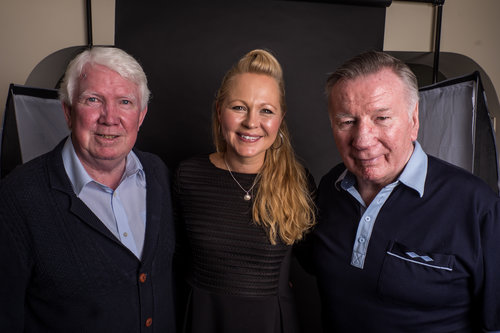 I am so lucky that my husband Jostein Ansnes pulled me into the LFC madness all those years ago. He has been one of my most important consultants along the way. We have moved to Liverpool with our kids: to release this book, build a small family hotel (Hotel Tia) at Anfield Road and to be close to our favorite football team. It  is an absolute living the dream feeling and without his support, I couldn’t have done this.

I have had such great help in Norway with my translator Kathrine Hake-Steffensen who worked simultaneously to me on the English version while I wrote the Norwegian one and I was lucky having my brother in law, Ole Magne Ansnes, Christopher Woods and Lars Gisnås as a great team around me in Norway, followed up by deCoubertin Books’ incredible staff for the English version. Simon Hughes is a writer I have a lot of respect for and him along with James Corbett and Ian Allen - they took the English version up to a new height. They are a small but very dedicated publisher of football books.

You can buy "Liverpool Captains. A Journey of Leadership from the Pitch" by Ragnhild Lund Ansnes directly from its publisher deCoubertin.