And The Sun Shines Now by Adrian Tempany 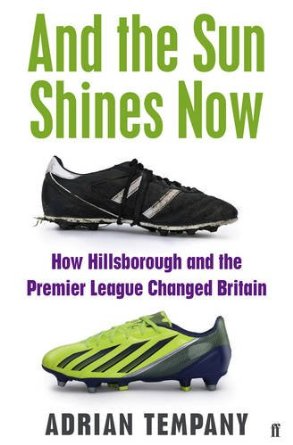 And The Sun Shines Now by Adrian Tempany

Published by Faber and Faber

Many might perceive this to be “just another Hillsborough book”. But it is more than that. Much more. What happened in Sheffield is covered and dissected meticulously as is the very fabric of British society and The Establishment that governed it in a decade during which a number of different tragedies claimed hundreds of lives.

If ever there was “an accident waiting to happen”, the location was the home stadium of Sheffield Wednesday Football Club and the date was Saturday the 15th of April 1989. Author Adrian Tempany was there in one of the pens. Only good fortune and survival instinct prevented his name from being added to ninety-six others. Adrian’s account of what he experienced in pen 3 of the Leppings Lane terrace as he saw his life slipping away while others around him perished is both moving and powerful and a most remarkable piece of writing. His words will stir many emotions in the reader, perhaps the main ones being compassion and anger. But he doesn’t write in this way to be over-dramatic. It is because he wants us to know what it felt like to be in there. Many Hillsborough survivors have told their stories, I know that. But this account will tear your heart out.

It was a major surprise that there had been no fatalities at Hillsborough in previous F.A. cup semi-finals. In both 1981 (Tottenham Hotspur v Wolverhampton Wanderers) and 1987 (Leeds United v Coventry City) there had been significant overcrowding on the Leppings Lane terraces; and this was also experienced by Liverpool supporters at the 1988 semi-final against Nottingham Forest. Sheffield Wednesday Football Club blamed the near-disaster in 1981 on “poor policing” but there is no doubt that by 1989 “Hillsborough was in a wretched condition”. All English stadia with a capacity of five thousand or more required a safety certificate issued by the local authority. When the South Yorkshire County Council was abolished in 1986, responsibility for this passed to Sheffield City Council. Although significant upgrades had been made to Hillsborough throughout the Nineteen-Eighties, the stadium’s safety certificate had never been updated to take these upgrades into account. 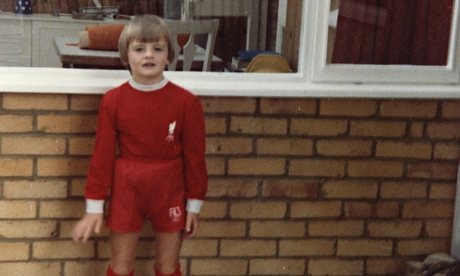 Prime Minister Margaret Thatcher never made any secret of her dislike of football supporters, effectively calling them “enemies of the State”. In the first half of the Nineteen-Eighties there was “a Conservative Government that was trying to dismantle the building-blocks of British working-class life, one by one”. During Thatcher’s first decade as P.M. there were frequent bitter labour disputes, most notably with the miners. Seventy-one miners were charged with rioting earlier in the decade and the counsel who successfully acquitted three of them declared that the “South Yorkshire Police operated a culture of fabricating evidence with impunity”. So the warning signs were already there. On Sunday the 16th of April 1989 Thatcher and her entourage of senior politicians and policemen visited the stadium in Sheffield that had seen such terrible scenes 24 hours earlier. Before she arrived, South Yorkshire Police held a meeting chaired by their Chief Constable Peter Wright. Is it conceivable that Thatcher did not have a meeting with the Police away from the cameras after the stadium visit was over? Not really, not when her own Press Secretary Bernard Ingham later admitted “I know what I learned on the spot. To blame the Police is a cop-out”. “On the spot” means while he was there; and if Ingham knew, we can be sure that Thatcher also knew (what the Police version of events already was). Sun Editor Kelvin MacKenzie also knew what he was doing, even if it took him years to admit that he had made a catastrophic mistake by believing what a Member of Parliament had told him. 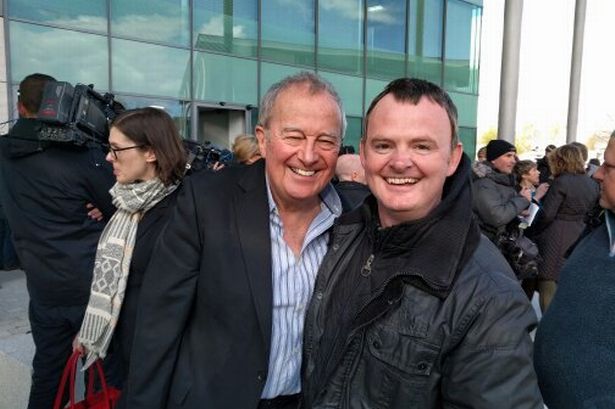 As 1989 ended, satellite television “was set to change the British media”. “Football would be pivotal in the transformation of Rupert Murdoch from a media maverick into the most powerful broadcaster in Britain”. Football was also part of the general ‘dismantling’ process by the ruling Government. The 1990 World Cup in Italy partly restored the sport’s image but financially and socially things were changing. Rapidly. “Football now had to move with the society around it; and it was, increasingly, an upwardly-mobile society”. With the emergence of the English Premier League just around the corner, Lord Justice Taylor had already urged the football authorities to “extract the highest possible price for television rights … and develop commercial opportunities”. This certainly happened but sadly “BSkyB works tirelessly to assure us there is no history of football before 1992”. Every ground in the top two divisions was expected to become all-seater by the start of the 1994-95 season. But it all had to be paid for and television money alone was not going to do that. Inevitably ticket prices rose (and have continued to do so, often steeply) until a situation was reached where “the price to be paid for all-seater stadia is that children and young adults are disappearing from the match”. Surveys have proved that this category of spectator has been declining steadily for many years. ‘Terrace culture’ has always been an important part of the English game but there will never be a similar ’Seat culture’. “Kids who have grown up in the Premier League era have never known what it is like to stand”. It is different in Germany, where Adrian Tempany spent a busy but enlightening week. Over there “people on a terrace will take responsibility for each other in a way that you are not encouraged to do whilst sat in an individual seat”. Supporters in Germany have owned some clubs for decades because of “a unique combination of social and political factors”. There is a phenomenal communal spirit at such clubs, especially at Hamburg’s St. Pauli, where the author found “a community club with an eye on local issues”.

A lot has changed in the twenty-seven years since the Hillsborough disaster; and a lot more is now known about why that disaster happened. Hillsborough did not happen because spectators stood on terraces, terraces that the Government was quick to consign to the scrapheap. People died because a number of poor decisions and bad errors of judgement were made by individuals and groups who had been given the responsibility to oversee our national sport. Mister Tempany nearly lost his own life because of those decisions but thankfully he has survived to tell the tale, passionately and eloquently. In September 2012 the author was finally able to exorcise some of the ghosts of April 1989 when he was one of eighty journalists who attended the press conference held by the Hillsborough independent Panel in Liverpool’s Anglican Cathedral. It was a cathartic experience for him to be present as “23 years of lies were unpacked before the public” in what Queen’s Counsel Michael Mansfield described as “the biggest cover-up in British history”. This book opens and closes with Hillsborough but it isn’t exclusively about one topic, even though that topic appears in the book’s sub-title. There is much to think about from the intervening years too, years in which the sport itself is much the same when it comes to its rules but the atmosphere around it, the match-day experience if you like, is now totally different to when the Nineteen-Eighties closed. Adrian Tempany takes us through the changes (some good, some not so good) and it is a remarkable journey.

BUY THE BOOK AT AMAZON 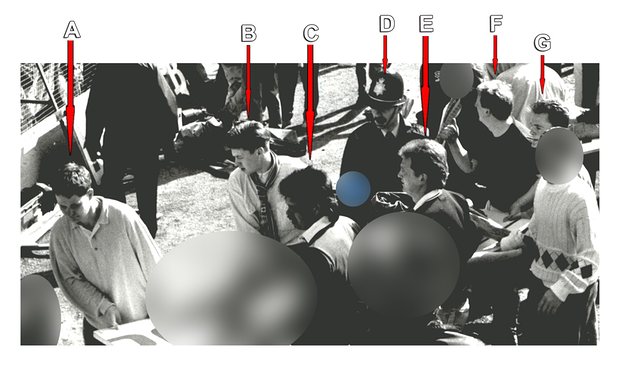 "20 minutes before kick-off, the crowd around me was wheezing and sweating and settling slowly, grudgingly, like cement. I had been in tight crowds before, but this was different. A silence was falling over the people around me. Some were hyperventilating, others were fainting. I was starting to panic now, but I was stuck. The pressure was tightening like a vice. My eyes began searching for police, or stewards, but no one was coming. Slowly, my legs, my backside, my arms and finally my chest went numb. One ear was folded in against my cheekbone by the head of a man to my right. I could move my head, my eyes and my mouth, and no more. My right foot seemed to move involuntarily, until I realised it wasn't on the ground but planted on the calf of a man in front of me.

I had never felt anything like this before: not on the Kop, not at Wembley. And it was about to get worse. That crush barrier was a few feet to my right, but I didn't see it. Because the light was slowly closing around my head. By now I was gasping for breath, and worried that my neck wasn't moving freely. Within feet of me people were standing dead, bolt upright. Three men had long stopped breathing and were now staring, with a fixed, almost disinterested expression, into the distance. Their faces were bleached white, but turning blue, their lips a cold violet. The only comfort I could find was that thousands of people who were still alive were now shouting for help, screaming, "There are people dead in here!" There were CCTV cameras trained on us. And there were police just a few feet in front of the fence who must have realised that metal crush barriers in our pen were bursting out of the ground.

I had been crushed on that terrace for over half an hour. I was exhausted, and stiff with shock. Incredibly, two people to my left had managed to climb above the crush, and were now crawling on all fours over the shoulders and heads of people around me, to the fence at the front. Unable to move, too exhausted now to shout, I wondered how they had managed to get out. And why it had been decided that I wouldn't.

It was then that I caught the eye of a policeman just the other side of the fence. It was an unmistakable, meaningful moment: because for four or five seconds, across the heads of scores of people, we looked each other in the eye.

I lost him when I mouthed the words, "Help us." He smiled to himself and shook his head at me, and walked on, a little uncertainly.

At that point I thought: "We've been left to die." Many people already had. People bigger than me, smaller than me, and smarter than me were gone. Now it was my turn. Fifty seconds, my brain was telling me: you've got 50 seconds left. I don't know where the figure came from, but there wasn't a moment of doubt in my mind: just a calm, orderly voice telling me to hurry up and take in the final minute of my life. As the seconds ticked down to 45, 40, 35, my lungs began to falter. I screwed up every ounce of strength left in my body - to lever myself into the air, climb on to someone's shoulders, escape. But as I heaved and strained, my body wouldn't move an inch. Those pressed tight around me were heavy, some were unconscious; others were gibbering, trying to black out what was happening.

I counted down to 20 seconds, and then at 15, or 14, I gave up. At 10 seconds, nine, eight, I floated away for a moment, briefly euphoric. Then I settled into my body, opened my mouth towards the sky and sucked what I could out of it. And then I closed my eyes. Five seconds later, they opened. The sky was still blue. And the police had finally opened the gate in the fence and were swearing at us. And I had survived."