Steven Gerrard - One of a Kind 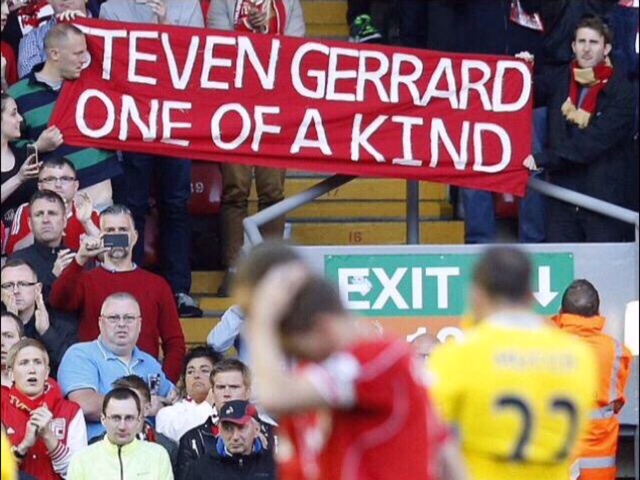 As a writer, reporter, fan or whatever you want to call me, dates such as the 29th November don't pass by unnoticed. On this day 17 years ago, Steven Gerrard made his Liverpool debut as a second half substitute against Blackburn Rovers at Anfield. Myself, as well as many other Liverpool supporters will have followed Stevie's career from the moment the thin looking Scouser, wearing the number 28 jersey graced the field for the first time, right up until his Anfield farewell against Crystal Palace this May. Therefore, any Liverpool fan in their thirties, like myself, would have started to enjoy watching Steven play from when they were around sixteen or seventeen years old. An age when I started going to the games a lot more frequently, compared to when I was a much younger kid. 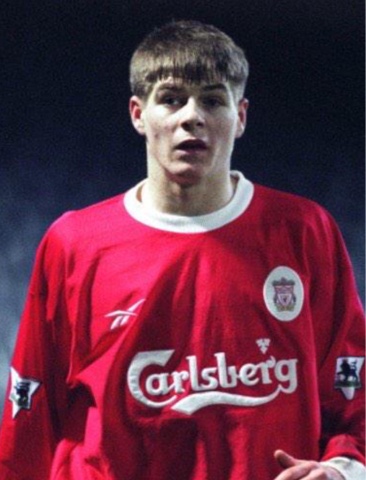 Steven Gerrard in his heyday, in my view, was the complete footballer on and off the pitch. Yes, I know he had a couple of run-ins with the police making headlines for all the wrong reasons. However, all in all, the humble, honest man he is, makes him a unique character. Steven didn't use to earn the respect of his players and managers by shouting the odds to make his presence known. He was, from my perspective, the perfect leader. Not only because of his natural footballing abilities, but also for his calmness, passion, dedication and the loyalty he has shown Liverpool Football Club his entire life.

John Barnes, was my childhood hero, the player I pretended to be when we used to have a game in the park after school with all the other local lads. However, nearly everything Liverpool Football Club have won whilst I've been an active supporter, Steven was heavily involved in. I'm well aware that many Liverpool and football fans in general would argue that Steven single handedly "carried" the club for many years. Obviously, having such an iconic figurehead in any team, on and off the pitch, in the dressing room, or at the training ground influences any player to perform at a higher level and also can serve as a mentor to the younger, less experienced players. However, to go as far as saying he "carried" Liverpool is a bit disrespectful to the other quality loyal players we have had in our ranks during the last decade or so.

Indeed, he could have won a lot more in football and played for any club in the world, but like he said: 'What's the point of winning medals and trophies for the supporters of clubs in which I wouldn't have been able to share the silverware with?" He wanted to share the glory and success with his own people, the people of Liverpool.


On the pitch as a central midfielder, there has been nobody like him, the best in the world. Steve Gerrard was purely world class. Former players keep stating that Stevie is the best player they have ever played with and also against. That's why you simply can't replace Steven. How can you replace someone who is one of a kind?

Now on to the argument that Gerrard can't be considered Liverpool's greatest ever player due to the fact he has failed to win a league title with Liverpool, as well as only having one European Cup to his name. It is generally accepted that the great Liverpool teams of the seventies and eighties were turning out with 9 or 10 exceptional players season after season. Whereas, again, without wanting to sound disrespectful to the teams of recent times, they would compare pretty averagely to the mighty Kings of Europe.

Nevertheless, let's not overlook the triumphs we lived in 2001, 2005 and 2006. There has been more success, but let's face it, those three years stand out the most. Despite this, realistically speaking, our recent history is on a much lower par to when Liverpool dominated football domestically and in Europe.

The point I'm trying to raise here is as far as Steven Gerrard is concerned he would have walk into any Liverpool team of the seventies and eighties. Furthermore, he would have been their captain and possibly made them even stronger and more successful (if possible!) Therefore, it's slightly unfair to judge Steven on his individual success regarding the amount of honours he has to his name, since he wasn't a part of one the greatest teams in the history of football.

Regardless of having played in "weakened" teams, Steven still managed to accumulate numerous major honours both with Liverpool and as an individual footballer. He lifted many of them as captain, including the European Cup in 2005. Moreover, with more than 700 outings in a red shirt to his name, Steven sits in third place in the all time appearance ranking, behind Jamie Carragher and the unbeatable Ian Callaghan. In addition, scoring 186 goals also puts him 5th in the all time goal scoring records for Liverpool. Furthermore, maintaining the captaincy of Liverpool Football Club for more than 11 consecutive years (a club record) is an magnificent achievement in itself.

Without a shadow of a doubt, Steven is number one in my eyes. Indeed, the likes of Souness, Dalglish and Hansen won more medals during their time at Liverpool, but the question I ask myself when pondering over this topic is; What's the biggest achievement, or better still, what involves making the most effort? Being part of a winning team or you make your team and teammates winners. The latter, in my view, has to be the most satisfying.

There is still a lot of work to be done in Liverpool for the Huyton lad. Steven Gerrard, will return to Liverpool Football Club, although, at present it's unknown in what capacity, but he will. Steven Gerrard, is more than just a footballer to this City. 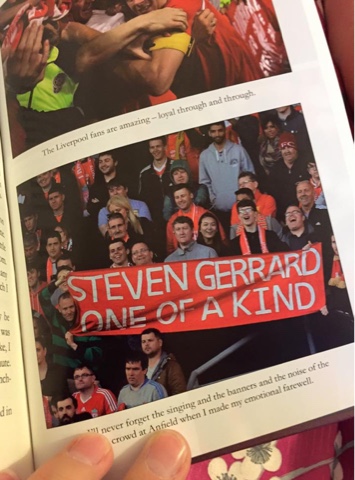 Was great to see our banner appear in Steven's new book.