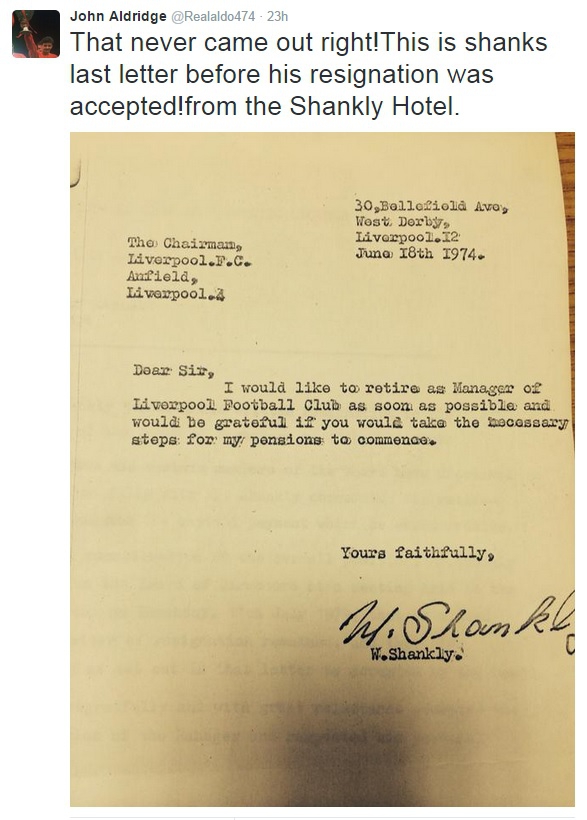 This is the letter confirming the retirement of one of Liverpool FC’s greatest heroes.

Dated June 18, 1974, it is the document handed over by Bill Shankly, ending his hugely successful 15 year tenure with the club.

The letter came to light when another Reds legend, John Aldridge, tweeted it out after coming across it within the archive of the Shankly Hotel - currently being completed in Liverpool city centre.

The sheet of paper, simply addressed to “The Chairman”, ended the role of a man credited as the driving force who revolutionised the Reds when he took over in December 1959.

The letter read: “Dear Sir, I would like to retire as Manager of Liverpool Football Club as soon as possible and would be grateful if you would take the necessary steps for my pensions to commence. Yours faithfully, W.Shankly.”

He added in a separate tweet that “I still adore Shanks”, describing him as Liverpool’s “greatest employee”.

Expected to open in mid-August the Shankly-themed hotel, on Victoria Street, is set to feature 60 rooms and include a museum dedicated to the famous manager.

The luxury hotel will also have a Shankly-themed bar and restaurant and is currently taking bookings ahead of its opening.