Men In White Suits: Liverpool FC in the 1990s 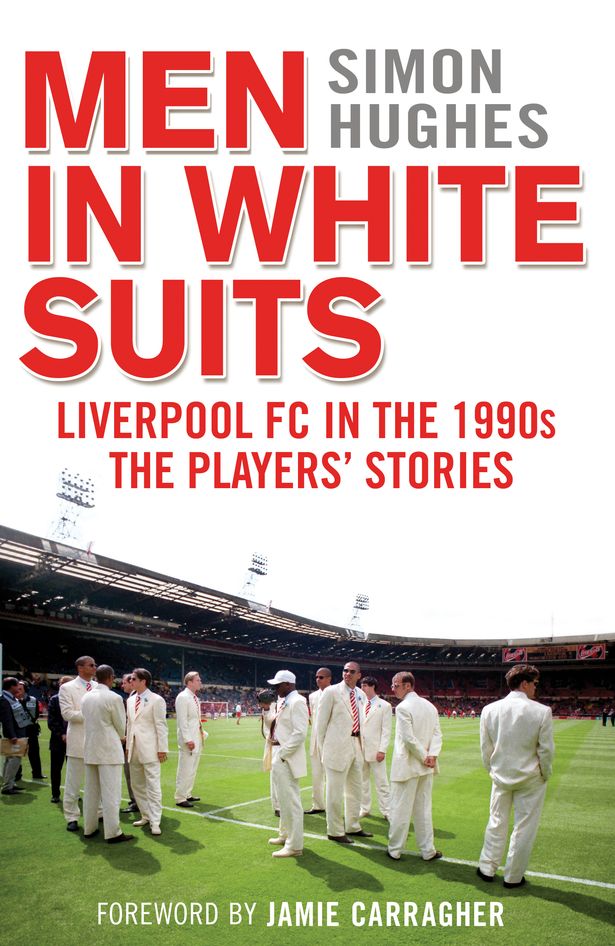 The idiom “If it ain’t broke, don’t fix it” means in more simple terms don’t change a winning formula. Although that could apply to many aspects of life, it is particularly true for those who earn a living writing or performing most types of art. Artists usually try to follow up initial success with something similar or something better. Sometimes it works and sometimes it does not. This is one of the former examples. Just as he had done so successfully with Red Machine for the Nineteen-Eighties respected sports-writer Simon Hughes again gets inside the heads of a group of men who represented Liverpool Football Club, this time in the final decade of the twentieth century. Simon’s choice of subjects to portray is again interesting because there are some big names missing. This was a turbulent period when the fortunes of a club that had been so successful in the previous two decades were definitely on a downward slope. This is a fascinating look at some of the reasons behind that decline as well as giving a fresh look at the life of a professional footballer in the English game as the Millennium approached.

The author’s decision to rack up the miles travelling around the British mainland to meet his subjects was sensible because he knew that the nine former Liverpool players (eleven including the two who also became the club’s manager) were more likely to open up … bare their souls if you like … in an environment with which they were both familiar and comfortable. Meeting the “little bit crazy” (the player’s own admission) Erik Meijer was somewhat more difficult logistically then just hopping onto a train or into a car because it involved a flight to Belgium and then hiring a car to take him across the border into Holland. Without exception all the interviewees have answered even the most difficult questions quickly and honestly. Simon’s decision to do the travelling instead of expecting people to travel to him was completely justified.

In Red Machine Simon Hughes deliberately added Ronnie Moran to his list of ten players so that he could give some balance between the playing side and the coaching side. That worked well even though Ronnie seemed rather concerned about giving away too many secrets. Adding Graeme Souness and Roy Evans to the Nineties list also worked well because both talked with extreme frankness about their time as Liverpool’s manager and both accepted blame for things that had gone wrong as well as disappointment/regret about things that might have worked out better. Souness revealed that it was “impossible to switch off as a manager” and that “captaincy did nor prepare him for management one bit”; a big regret for Evans was that Stan Collymore “let himself down in the last six months and could have gone on to be a really great player”.

The animosity towards Graeme Souness by a large chunk of Liverpool’s massive fan-base is well-known. So it is interesting that the players in this book who worked under him have mostly kinder words for their former boss in that they recognised what he was trying to do. Jamie Redknapp’s comment that “he tried to take on too much too soon” seems to be the view of other players of the time too with the manager explaining why he had to act quickly because when he arrived “the team wasn’t good enough and neither was the squad”.

Inevitably the “white suits” in the book’s title cropped up a lot as did references to the Spice Boys. But all the men involved during that period (Redknapp, McAteer, Scales and Evans) knew that they would be questioned about this before the interviews even started. McAteer insisted that despite popular opinion at the time this group of players “didn’t have a jet-set lifestyle” but it is clear that being labelled in this way was an irritation with Redknapp saying : “I wanted to talk about football. Most of the journalists wanted to talk about the Spice Boys. I remember doing interviews and being really prickly”. Maybe some of the younger players who closely followed the 1996 team were wrongly tarnished with the same reputation with David Thompson expressing the opinion that “Houllier came in with the idea that all young British footballers were tearaways”. Erik Meijer says that the Frenchman was “very difficult to figure out” and without naming names Jason McAteer implies much the same when he looks back at the early part of his career under Bruce Rioch at Bolton : “He was honest and loyal – two things I craved throughout the rest of my career but never really got”.

Highly-respected administrator Peter Robinson once said that if Manchester United got it right “off the pitch” then Liverpool were in trouble. Liverpool missed out badly commercially in both the Seventies and Eighties and once United started collecting trophies regularly in the Nineties the opportunity had gone because they took a lot of the market that Liverpool should have conquered earlier. Liverpool’s playing success in the Nineties should have been greater than it was. A championship at the start of the decade and two domestic cups during it was scant reward for what the club might have achieved, particular during the Roy Evans era when United’s stranglehold on the domestic game might have been broken with a bit more luck. It was a frustrating decade to be a Liverpool supporter. Clearly it was a frustrating decade for many of the club’s players too. Ronny Rosenthal says that “the club was naïve in thinking that its methods would be successful forever”. Different men tried different things to keep the success going but the game was changing and some of those changes were not done at the right time or in the right way. Men In White Suits is a quite brilliant follow up to Red Machine. The success of both books will hopefully encourage Simon Hughes to one day repeat the idea for the first decade of a new century.

Click here to buy Men in White Suits: Liverpool FC in the 1990s - The Players' Stories from Amazon.co.uk