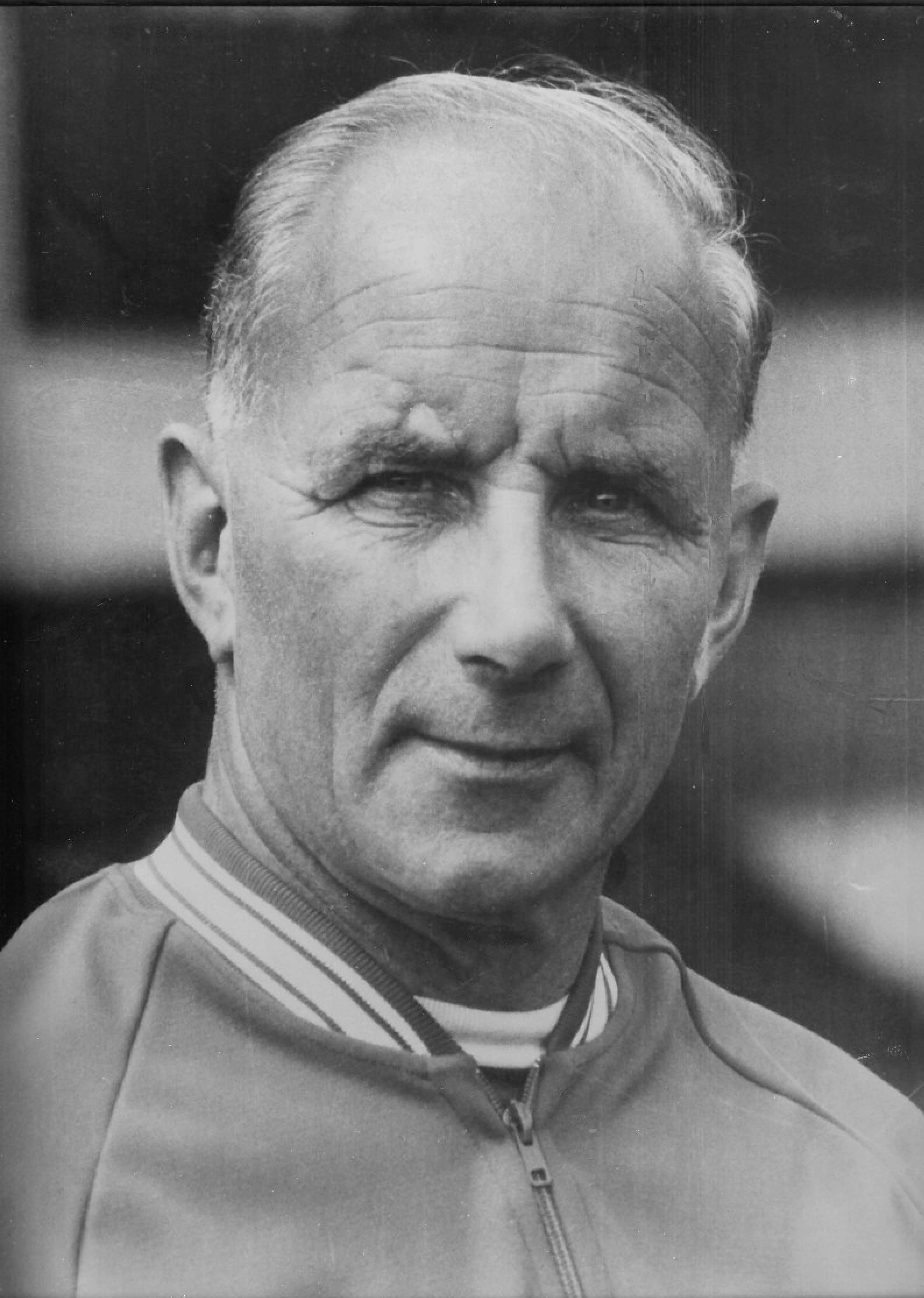 'Reuben and Shanks were born out of the same pod, exactly the same mentality.'– David Fairclough

Trainer Reuben Bennett was as hard as they come. The tough Scotsman was Shankly‘s corporal, a man to his liking who kept the players on their toes. Shankly described Reuben once in his own grandiose style as the "Hardest man in the world." 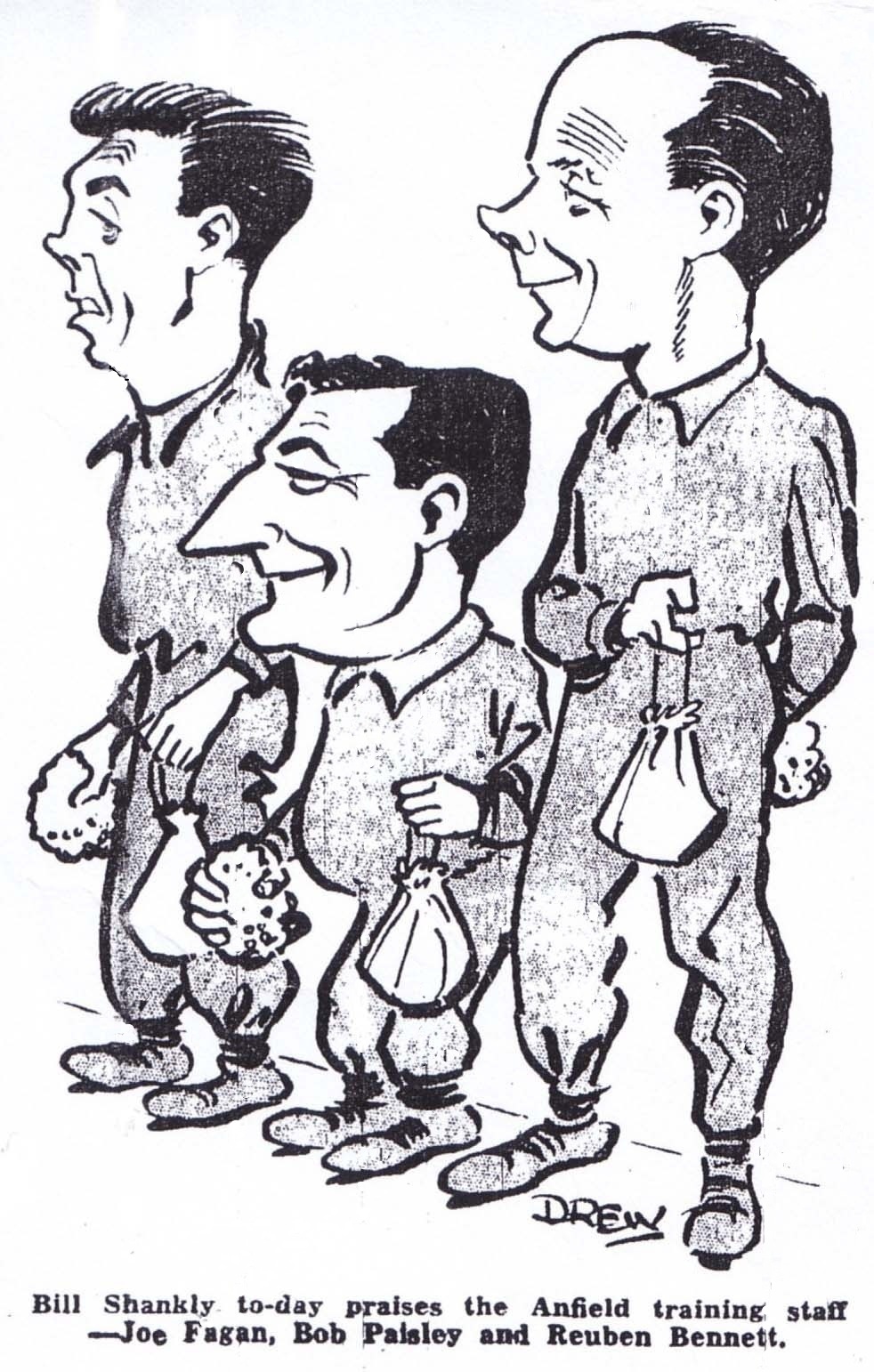 Reuben was born in Aberdeen shortly before the start of the Great War and was a goalkeeper at Hull City, Queen of the South and Dundee, beginning his coaching career at the latter. He was appointed head coach at Liverpool on 26 December 1958, when Phil Taylor was manager. When Shankly arrived a year later, he chose to keep the club’s training staff and thus Reuben became one of the original Bootroom boys along with Bob Paisley and Joe Fagan. Reuben had earlier worked with Bob, Bill Shankly's brother, at Third Lanark. Shankly believed if the team was fitter than their opponents it could conquer any obstacle and Bennett made sure his players got away with nothing during training.

"He didn‘t tolerate wimps too much,’ former player Willie Stevenson said. "He considered any feeling of pain or hurt was soft. One time we were in Blackpool. It was really, really cold. I think it was the 1965 winter when all those games were off. We were on the beach playing in snow and the water was iced out to about 30 or 40 feet. Anyhow one of us kicked the ball into the water and Reuben says, 'Go and get it.‘ We told him to bugger off. So he called us a load of wimps and promptly proceeded to run into the sea, swim out, get the ball and come back and carry on playing. He only had shorts and a T-shirt on. We all had balaclavas, hats, gloves, pullovers.“

Even though Reuben was sometimes ruthless with the players the chain-smoking Scot was pleasing company. ‘He was very popular with the players. He used to tell us all these stories from when he was in Scotland, all grossly exaggerated! In the afternoons you‘d see him standing outside Anfield in short sleeves when it was ten degrees below,’ Roger Hunt said.

Reuben was head coach until 1971 when Shankly decided that not only had the old Liverpool team of the 60s to be broken up, the backroom team also needed to be restructured. As a consequence Reuben (the oldest after Shankly) moved on to undertake "Special projects" especially the building of dossiers on opposing teams and players, whilst remaining an integral part of the coaching set-up. Reuben remained with Liverpool until 1986, having spent a total of 28 years at the club!

No one is more ideal to give a more intimate perspective of Reuben Bennett than Michael Bennett, his son. He was kind enough to write this piece for LFChistory for all Reds to enjoy. INCLUDES NEVER-BEFORE SEEN PHOTOS! Over to Mike...

Apart from his talents and abilities as a player, coach or manager, Reuben Bennett was also a storyteller. In this he was not alone, because most footballers no matter of what level all have stories to tell. But Reuben was a football professional for over 50 years, plus he spent six years of war in the Army. So his fund of tales and anecdotes was gleaned from a rich harvest of experiences.

As children my brother and I would listen to his bed-time stories at the weekend. My favourites were those about ‘the Lonely One’ and about Pirates!! This manifested itself in my selection assessment for the kindergarten at Aberdeen Grammar School. Having gone through the various tests required of me, Dad told me that the clincher was when I turned to the member of staff there and pointed to Dad saying, ‘He’s not really my Dad, he’s Captain Morgan, Scourge of the Spanish Main’. 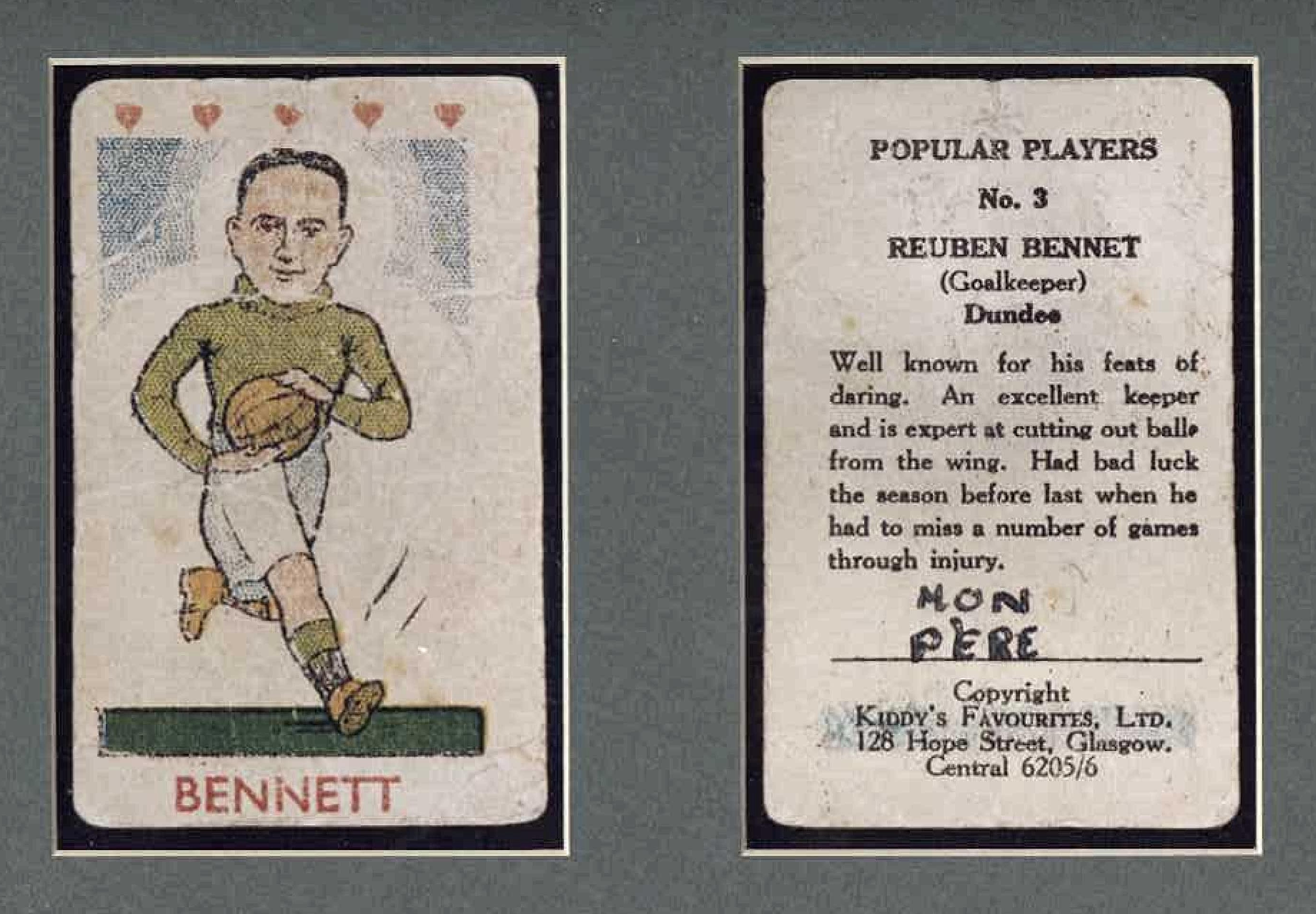 In my teens when my friends would come round, often Dad would wander in and regale us with his tales of football and sometimes the Army. Like the one concerning his boyhood hero Patsy Gallacher, whom he considered to have been one of the greatest footballers to have played in Britain (indeed at Dundee he played with his son Tommy who is the father of former Scottish international, Kevin). Patsy played for Celtic, and during a derby match with Rangers had his leg broken in a tackle. As he was being carried off the pitch the offending Rangers player went over and said ‘Aw Patsy, I’m awfie sorry’ whereupon Patsy swung his good leg over and kicked the Rangers player in the groin.

How true were his stories? I am inclined to believe that there was more than a large measure of truth to all of them, with perhaps the occasional bit of embellishment. 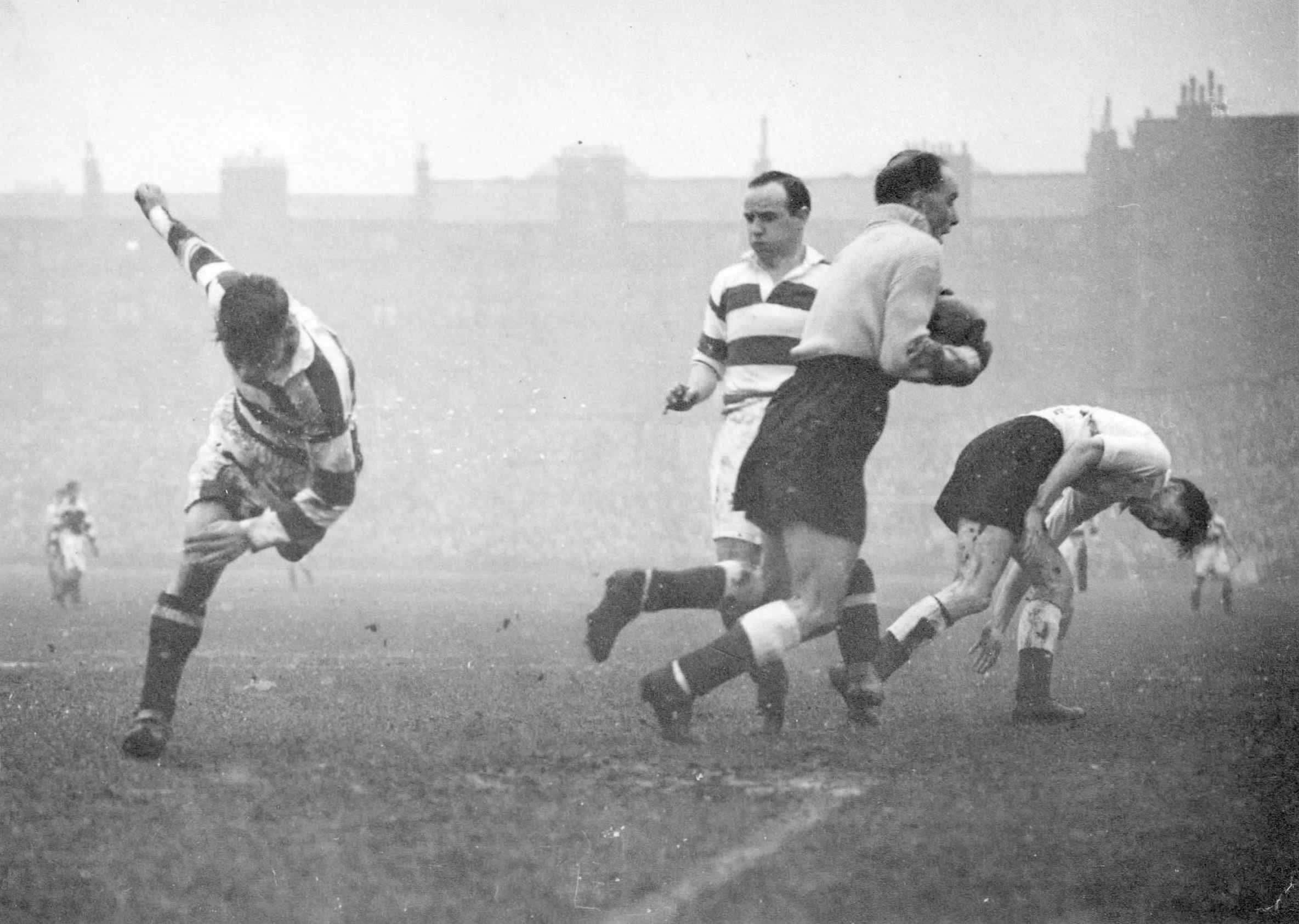 Keeping Dundee's goal safe versus Hearts in the Scottish cup

In Scotland as a junior professional, one often had to play on ash surfaces, instead of grass pitches. So it was regular for players to finish a game with ‘ash rash’, particularly on the legs. After one game the rash just above Dad’s knee was especially bad. So to get rid of it four players held him down on the trainer’s table whilst the trainer scored the damaged area with a wire brush to clean the leg. Remember this was in the early 1930s and there were no such things as physiotherapists and doctors on call. You had to provide the best solutions from what resources you had. So I am sure that this did actually happen to Dad. 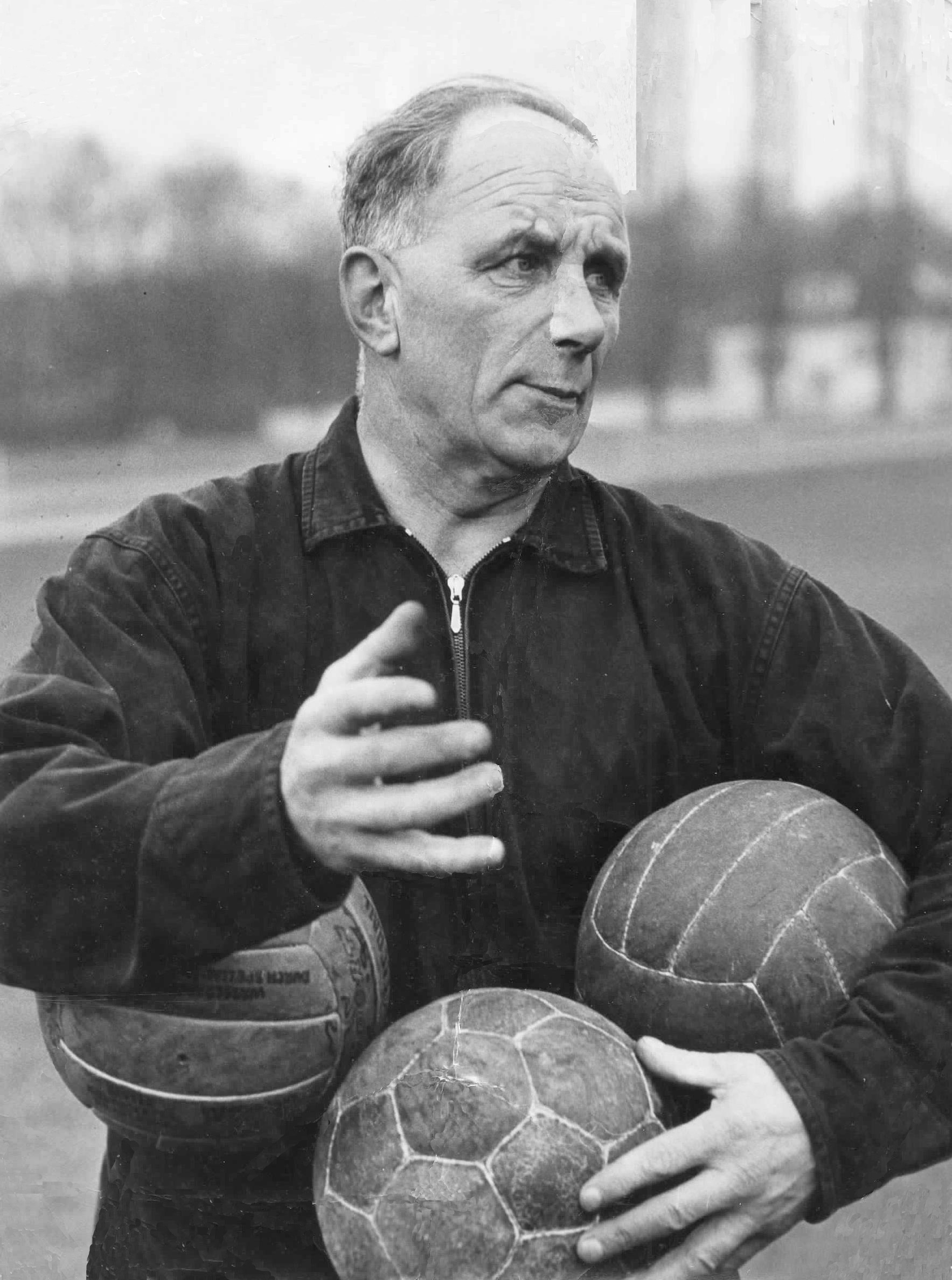 These kinds of stories tend to make you think about just how tough and resilient footballers were ’way back then'. Certainly the ‘Sunday Post’ labelled Dad as the ‘Iron Man of Anfield’. Undoubtedly he was very strong both in body and mind. But he was a sympathetic person as well who took the greatest delight in helping a player or anyone achieve his or her potential. Away from football for example whilst we lived in Aberdeen, Dad was involved with the Boys Brigade. When at Dundee F.C. he coached one of our Olympians for the 1952 Olympics. But there was also a very gentle side to him which I saw especially when my (much) younger sister was just a toddler.

To a great many boys their Dads are automatically heroes, no matter in what walk of life they moved – and that is only right. To-day footballers have attained such a status level that any boy whose Dad is a star footballer or coach or manager would understandably be a massive hero to him.

Go back 50- 60 years ago it was radically different. Football was still the People’s Game, when the stars on the pitch were as likely to live in the same street as you, shop in the same shops, use the same buses or trams as you did and live the life of a normal mortal. When their playing careers were over, most players had to find alternative employment to provide for their families.

Making a living out of football after playing was not easy. Making a good living was even harder. To do this meant having to be mobile, and be prepared to move not just from club to club, but also from town to town. Times could be tough and it could have been so easy to give up football and move into a different way of life. So it was that by the time I was 13 and we came to Liverpool, we had moved home five times. 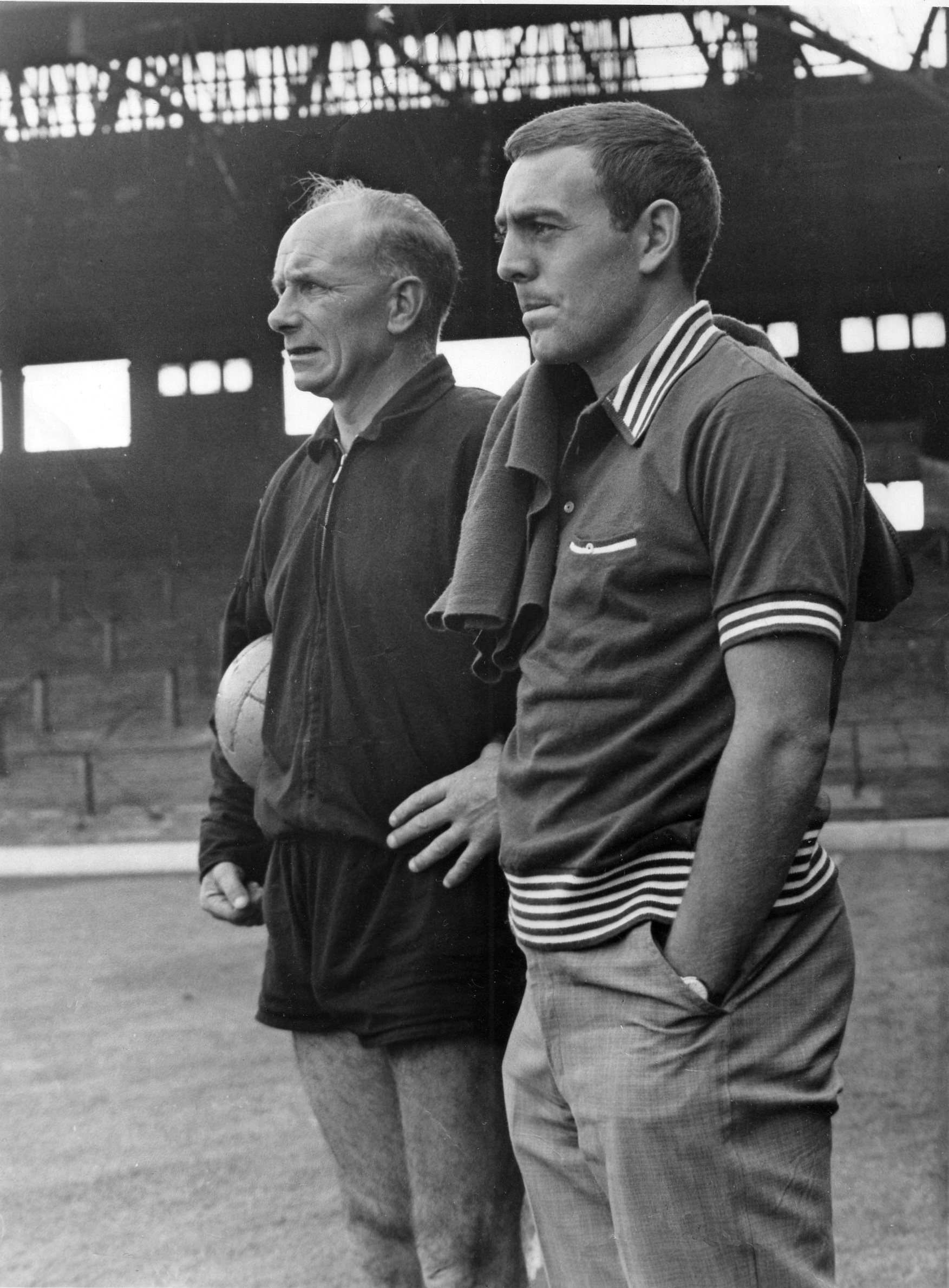 Was Dad my hero? Well in a big way he was and not just because of what he helped build at Liverpool. I played in goal only because Dad was a goalkeeper and I wanted to be like him. I could not love, admire or respect my Dad any more than I do. When Liverpool had won a title or a trophy I was always at the door to greet Dad on his return and the first to shake his hand.

But he was just Dad, often an absent Dad, whose commitment to football dominated our lives, yet was always there with support whenever it was needed, encouraging us in all that we did, especially in our education.

He died just one week short of his 76th birthday. He still remains the one member of the original Boot Room that kept very much in the background. He was a modest man in that he did not want the limelight. Although confident of his abilities, Dad was no braggart. Certainly he was well known on Merseyside, but he confessed to me that when he undertook the Special Projects role and travelled to watch teams he did not realise how much of a good reputation he had outside of Merseyside. 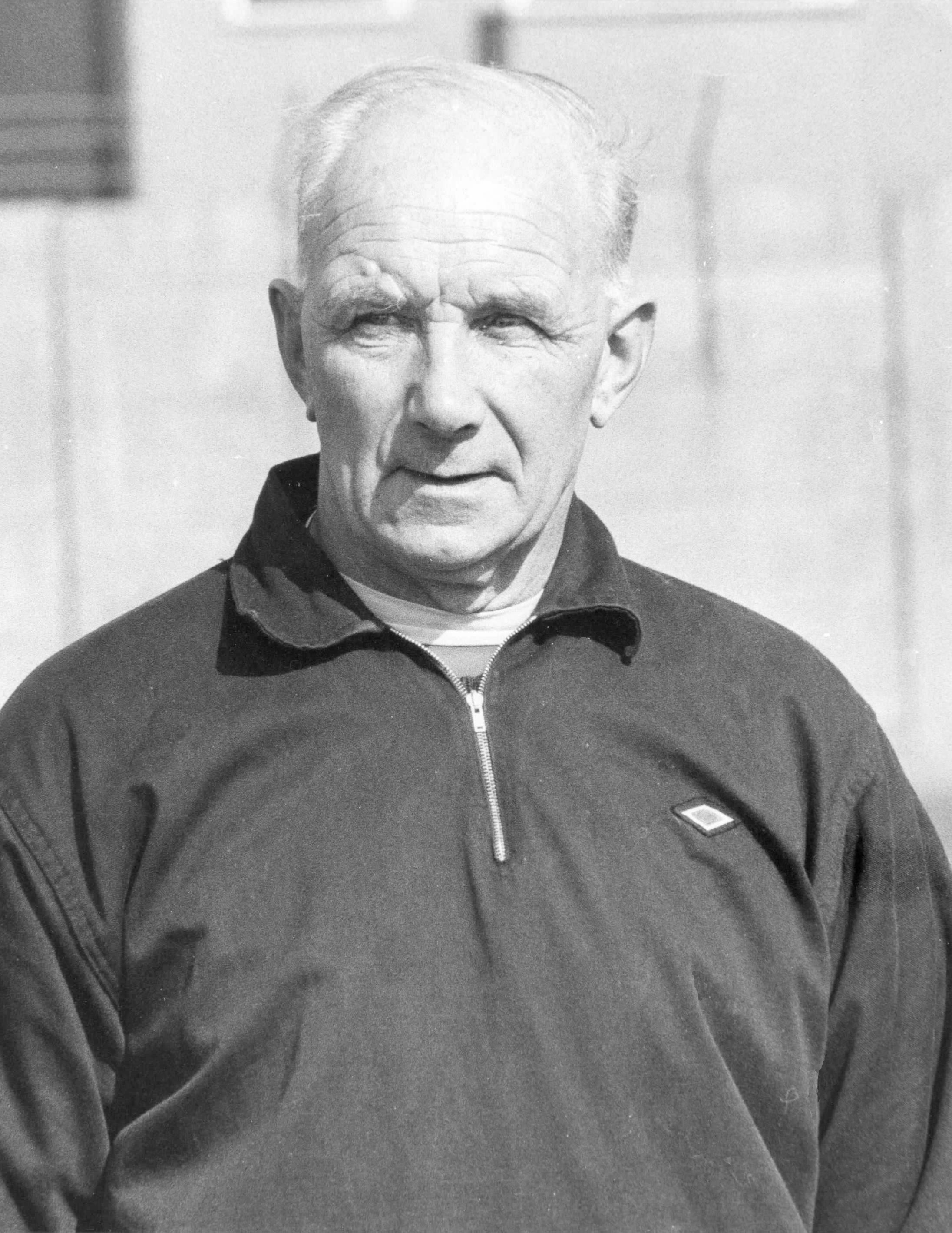 Do not mess with this guy!

His gain from football was the sheer joy of just being a part of it, massively enhanced by the immense success that followed at Liverpool. He was, I suspect, like many of his generation, the boy who made a life though pursuing his hobby and passion. It was a route for many who had little or no academic qualifications and for whom the options and opportunities were limited. For Dad it was the alternative to the fishing fleet or butchery (he was a time-served butcher). He embarked on an adventure not knowing what was to come, living the moment because the rewards kept coming.

When he died he left Mother sufficiently provided for, but had he lived 50 years later, then perhaps I might be writing this in the Bahamas. 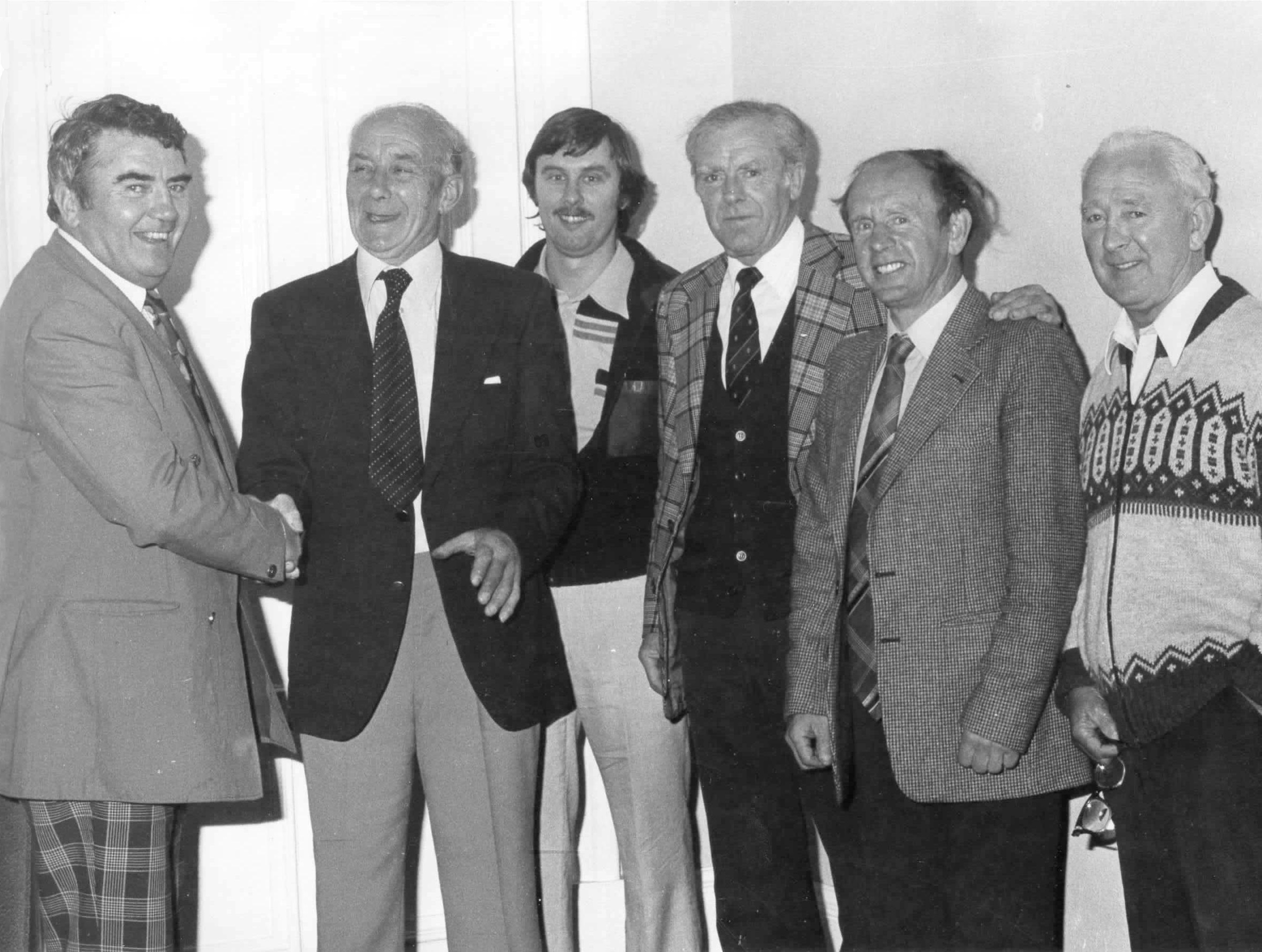 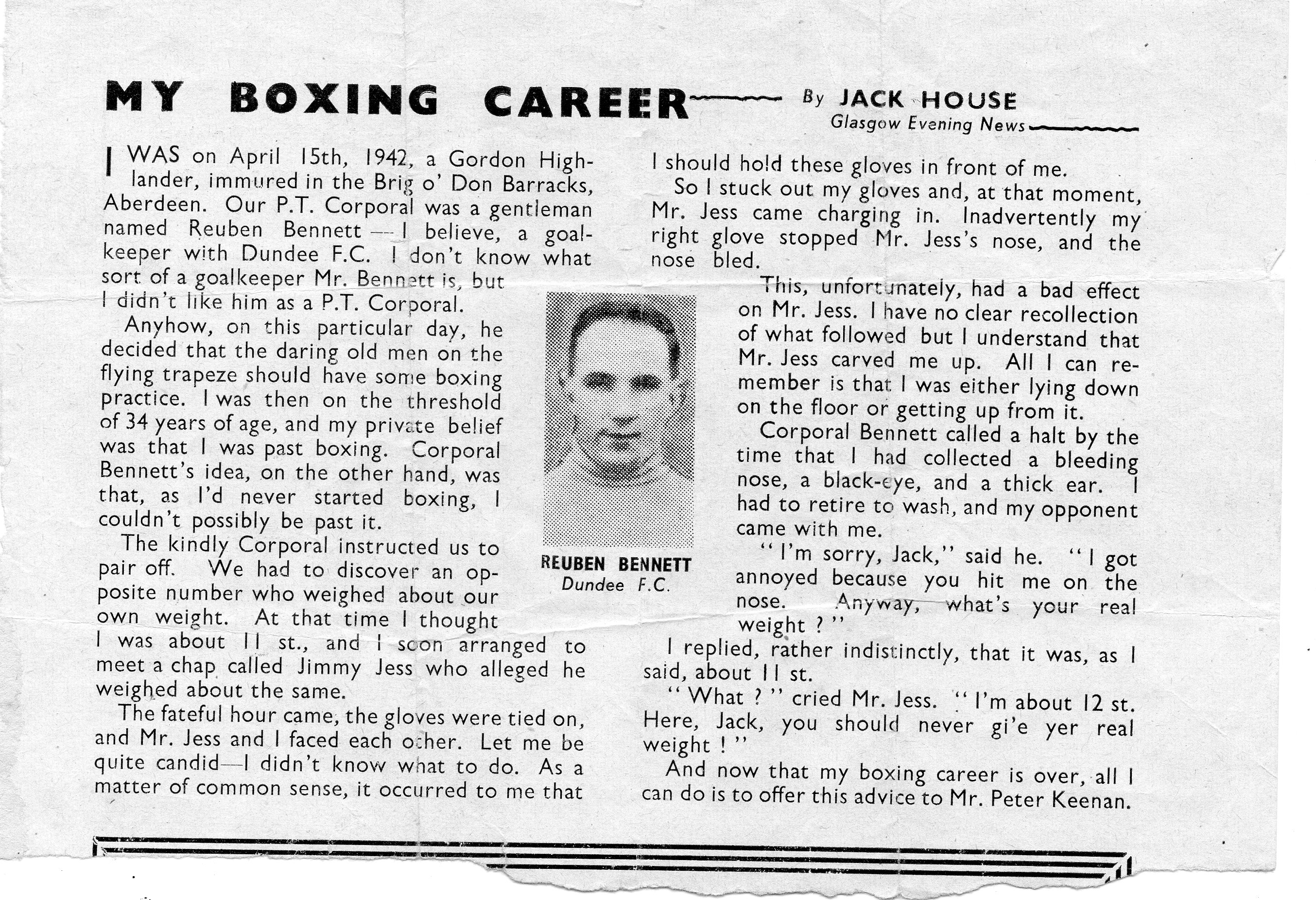 An article written in the 40s by Jack House, an extremely well-known writer in Scotland.
Clearly Dad left his impression on others outside of football. CLICK TO ENLARGE
Michael R. Bennett for LFCHistory - Copyright LFChistory.net