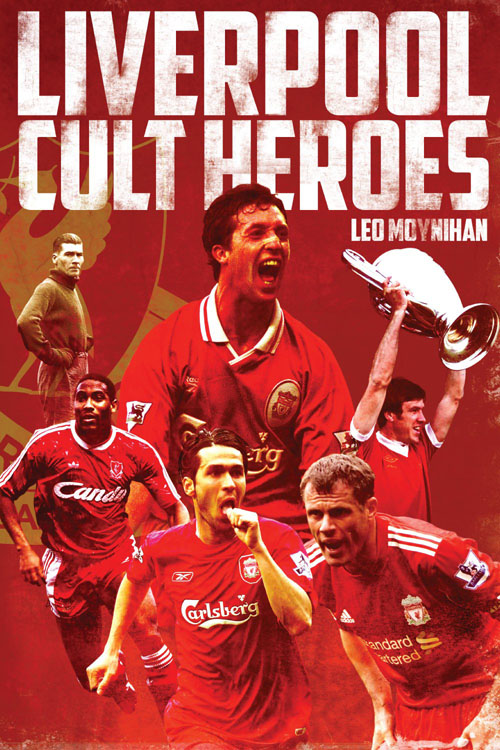 Ask any Liverpool supporter to name his top ten players from the club’s history and you will almost certainly not get two lists with exactly the same names on them. Selecting five, ten or (in this case) twenty players is a very individual thing and to some extent depends on the age of the supporter making the selection. Simon Hughes picked 10 players from the Nineteen-Eighties in his excellent “Red Machine”; Stephen Speed picked fifty names from three consecutive decades in his “Ex-Reds Remembered”. Leo Moynihan restricts himself to twenty men who acquired a certain cult status amongst the fan-base. But what strikes you immediately is not who he has chosen but the absentees. No Liddell, no Hunt, no Dalglish, no Souness, no Rush and not even a Gerrard. It is most unlikely that any supporter, even if you asked hundreds, would not have at least one of that famous sextet in his or her own list. But we have to respect Leo’s choices and the explanation as to why these big names are missing is quite simple : the men portrayed here were “not necessarily the greatest footballers but a unique brotherhood of mavericks and stalwarts, local lads and big signings”. Their deeds might not have been as big as some of the absentees but nobody could doubt the size of their hearts.

I noticed a few factual errors as I was reading but not so many that it spoiled the enjoyment of these twelve mini-biographies. Errors are common in football books but sometimes it is down to a player remembering things wrongly more than a lack of research by the author and/or his proof-readers/Publisher.

On the whole my feeling is that Mister Moynihan has chosen well in that a player described as a cult hero is normally someone who had a great affinity with the supporters. That certainly applied to Joey Jones who confessed that “I always felt I was representing the lads off the Kop out there on the pitch”. It is also true that “Fowler might have been ambitious but the fans could see themselves in him”. Another man who had a special rapport with the supporters was Albert Stubbins who was without question “one of the most gifted centre-forwards of the post-war era”. I was quite fascinated to learn so much more than I already knew about Alex Raisbeck and Elisha Scott, two men who dominated the club’s fortunes in the first three decades of the twentieth century. One reporter of the time affirmed that Raisbeck “dominated the whole field and was, without question, the one superlative player”; and as for Scott another described him as having “the eye of an eagle, the swift movement of a panther and the clutch of a vice when gripping the ball”.

I saw sixteen of these men play and I can up that to seventeen if I am allowed to include the time when Jimmy Melia proudly ran out at Anfield at the head of his Aldershot team for an F.A. Cup-tie in January 1971. If I had to pick a personal favourite from players I saw a lot of it would be, throughout the Nineteen-Seventies anyway, a man depicted here as an “energetic bundle of enthusiasm”, Emlyn Hughes. Sixteen of the chosen twenty are British (Craig Johnston, Luis Garcia, Dirk Kuyt and Luis Suarez are the four who are not) and sixteen of the twenty are still alive (Alex Raisbeck, Elisha Scott, Albert Stubbins and Emlyn Hughes are the four who have moved on to that great red stadium in the sky). The choices of Raisbeck, Scott and Stubbins are interesting because to a lot of today’s supporters they are just names from the past, about whom little is known in reality. But Mister Moynihan has researched their background very thoroughly, as he has done for all twenty men to be fair, and he brings them to life in a very vivid way chronicling the journey that took them to Anfield, what they achieved there and how they were perceived by the supporters and their team-mates.