First published at A Numbers Game on 18 April 2015. Edited slightly for publication on LFChistory. A Numbers Game is a site that examines the "fascinating and often maddening world of football numbers."

Regular readers of the blog will know that we have a fondness for the numbering system used by Liverpool in their glory days of the 1970s and 80s.

It’s something we felt warranted investigating and it’s important at the outset to credit the LFC History site and the excellent book written by its creators Arnie Baldursson and Gudmundur Magnusson, Liverpool: The Complete Record.

Why was Liverpool's system fascinating? For one, if everybody had so many ‘wrong’ numbers, it would be tiresome, so the Reds’ distinctiveness definitely helped. Take a look at the formation below, which was how Liverpool lined out against Manchester United on September 16, 1990. We were actually going to use the team from the 4-4 FA Cup draw with Everton – Kenny Dalglish’s last game before resigning – but, as we will explain, that was actually too off the wall.

The layout was what had by then become accepted as the default mode. A 4-0 win against United, with Peter Beardsley scoring a hat-trick, convinced pundits that the Pool were well on the way to a 19th title, with The Guardian gushing: "This time it seems Liverpool are determined not to let potential rivals for their League title even dream a little."

You certainly wouldn’t number your side like this if you were starting from scratch. 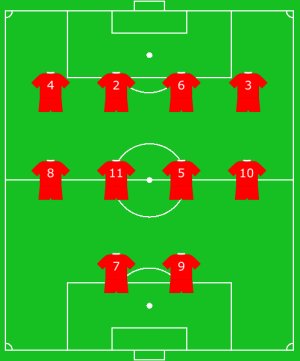 Therein lies the other genius (in our view, anyway) element – the team evolved over two decades or so, with the changing of players’ positions affecting the numerical layout. Going through the team from that game in 1990 (apart from goalkeeper Bruce Grobbelaar – they always kept number 1 in goal), we’ll examine how each number came to be sited where it was.

The Swedish centre-back joined Liverpool in the summer of 1989 and was seen as an eventual successor to Alan Hansen, who had begun to struggle with injury. Hansen was able to play much of 89-90, though, so Hysen slotted in alongside him as Gary Gillespie missed much of the campaign.

Number 2 had been the right-back’s number until 1985-86, a season when Phil Neal, Steve Nicol and Sammy Lee all wore it. Gillespie established himself at 2 towards the end of the season, but at centre-back, with Mark Lawrenson, who had worn 4, slotting over to the right to accommodate him.

In the graphic above, 3 – along with 6 and 9 – is in what would be considered its ‘right’ position and, by and large, it was always that way at Liverpool. However, when Hansen emerged in the late 70s, occasionally he – or Phil Thompson – would wear 3 at centre-back with Emlyn Hughes (6) moving to left-back, giving them a Brazilian look in defence. 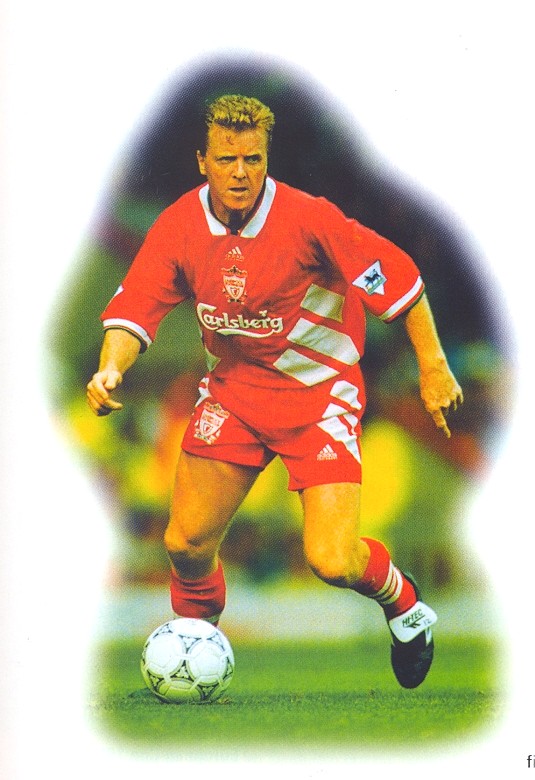 Number 4 was usually alongside 8 in midfield in English teams that played 4-4-2, but some teams had it at centre-back with 6, the old left-half, pushing up when the W-M begat the newer system. This was the way it was at Liverpool, where Tommy Smith wore 4 and anchored the defence.

Phil Thompson inherited his shirt and after his arrival in 1981, Nicol wore a variety of numbers as he filled in in different positions, though by ’87 he had settled on either 2 or 8, depending on whether he was playing right-back or right-midfield. For the opening game of 87-88, away to Arsenal, Gillespie and Hansen were the centre-backs so Nicol took 4 at right-back. He never started a game wearing a different number thereafter, though.

As mentioned above, 4 and 5 were the accepted Liverpool central defenders in the early 70s, with Tommy Smith and Larry Lloyd the men in possession for the majority. In early 1974, Lloyd was sold to Nottingham Forest but, instead of purchasing a replacement, Bill Shankly reckoned that the man to fill the role was already in his ranks.

Midfielder Peter Cormack had generally worn 8 up until then but happened to miss a few games immediately before Lloyd’s removal. When he returned, he was given 5 and so a tradition was born. Ray Kennedy would inherit it from him and then be switched to the left wing, with Whelan taking over there before John Barnes’ arrival saw him move to the middle.

Interestingly, before Whelan nailed down full ownership of 5 in 1982, Lawrenson had worn it in a couple of games early that season with Whelan wearing 6. Clearly, the defender didn’t feel as strongly about it as his Republic of Ireland team-mate.

Emlyn Hughes had played a bit at left-back but was generally a marauding midfielder with 6 on his back. Where Larry Lloyd’s uncompromising nature meant that he lacked a bit of finesse, Shankly felt that Hughes’ greater footballing ability could help Liverpool play it out from the back. He retained 6 as he dropped back to partner Smith. After Hughes’s relocation, 6 was a centre-back’s number apart from the few times he slid across to left-back. Hansen displaced him early in 1978-79 and, when fit, he was the undisputed choice there, assuming the captaincy after Kenny Dalglish’s appointment as manager in 1985.

Hansen missed a lot of 1988-89, with Gillespie and Jan Molby – despite being regarded more as a midfielder – wearing 6 at centre-back. In addition, Nigel Spackman and David Burrows wore it at full-back as Nicol filled in in the middle. Hansen returned for the final seven games of the season and played in the bulk of games in 89-90, but didn’t play at all in 90-91 as Gillespie and Ablett shared 6. New signing Mark Wright took over the number at the start of 91-92 but eventually managed to snare the number 5 shirt.

THE Liverpool number! Before Nigel Clough, Vladimir Smicer, Harry Kewell and Robbie Keane threatened to dilute the prestige of that number, Kevin Keegan and then Kenny Dalglish had built the legend and then Beardsley and, arguably to a lesser extent, Steve McManaman carried the mantle admirably before Luis Suarez restored its power.

How did a number normally seen as that of a right winger’s come to be mostly used by a second striker at Liverpool? The answer – or what we reckon to be the answer, anyway – is fairly boring, really: Keegan used to be a winger. He was signed as such from Scunthorpe United by Shankly in 1971, seen as Ian Callaghan’s replacement. However, a full-scale intra-squad practice match before the 71-72 season opener against Nottingham Forest convinced the manager that Keegan could be a striker of renown and so it proved.

Liverpool had lost the Charity Shield to Leicester City the week before and the attack was almost totally re-nosed for the Forest game. Of the players who wore the numbers 7 through 11 against Leicester, only Steve Heighway (9) remained, and he switched from the left wing to the right. Callaghan had worn 7 but, rather than new left winger Peter Thompson taking that, he was 8 with Keegan at 7 – we can only presume at his own request. Keegan played 230 games for Liverpool before he joined Hamburg in 1977 and he wore 7 in every single one, with Dalglish inheriting the number and remaining similarly faithful before Beardsley followed suit. As of the time of writing, it remains unoccupied since Suarez’s departure to Barcelona last summer.

John Aldridge’s departure meant that Houghton effectively settled on 8, which had been worn by Craig Johnston and Sammy Lee before him on the right of midfield. Prior to that, Alun Evans had worn it when playing as a striker after Steve Heighway retained 9 when he moved to the wing. Brian Hall had set the ball rolling in terms of right-midfielders wearing 8 as it was he who had been given the shirt when Peter Cormack missed a couple of games before returning in the number 5.

One of only three ‘correct’ numbers in the 1990 iteration, but even this most sacred of institutions – 9 at centre-forward – had been dabbled with. As you read above, Steve Heighway had taken the number on a tour of the wings but when John Toshack left, midfielder Terry McDermott became the new number 10 while Irish international Heighway moved back up front – he wasn’t an automatic first choice though, with David Fairclough and David Johnson also wearing 9. Johnson was the man in possession until Rush’s arrival in 1981 and it was the only shirt the Welsh international wore until he joined Juventus in 1987.

As 1987-88 dawned, manager Dalglish felt that Aldridge already had enough to live up to given that he was Rush’s doppelganger and so decided that he would wear the number 8 rather than 9, which now became the main number used by the right-winger. Rush returned in 1988. Though squad numbers were five years into the future, it was effectively the case that 9 was his and 8 was Aldridge’s, with Houghton taking whichever one of those was available until Aldridge left for Real Sociedad in 1989.

The reasons for McDermott taking 10 and bringing it to midfield after Toshack left are unclear, but there’s no doubting that it firmly became a midfielder’s number thereafter. Craig Johnston, John Wark, Kevin MacDonald, Michael Robinson and Jan Molby all wore it with varying degrees of success but when Barnes arrived from Watford in the summer of 1987 as part of the three-pronged approach to replace Rush he assumed tenure of 10.

Barnes’ signing, and placement on the left of midfield, led to Ronnie Whelan reverting to the centre and retaining the number 5. It was Ray Kennedy’s move in the opposite direction in the mid-70s which had led to 11 being worn by central players, first the re-tooled Ian Callaghan and then his replacement, Graeme Souness. The Scot left for Italy in 1984 and Wark was 11 for a lot of the following season but McMahon, a signing from Aston Villa in 1985 – Dalglish’s first – began to be seen regularly in it then. McMahon did wear 7 for the first two games of 86-87 as MacDonald played in 11 but Dalglish’s return to the side saw the England international return to 11 and there he stayed.

As can be seen, from ’87 on, Dalglish tended to play favourites as certain players – Nicol, Whelan, Hansen, himself and then Beardsley, Aldridge, Rush, Barnes and McMahon – were always allowed to wear their preferred numbers.

That meant that others, like Houghton, had to switch around, but he wasn’t even the worst ‘sufferer’. We mentioned above that we didn’t base this piece on the 4-4 Everton game and a reason for that was that McMahon missed it so Nicol played in midfield and Barry Venison appeared at right-back wearing 11. That was the only time Venison wore it and it completed his outfield ‘set’, wearing every single shirt. To what extent Dalglish was aware of this is unknown (he probably wasn’t), but Venison wore 9 – the only other shirt he hadn’t played in – two weeks previous in a league game, also against Everton.

Aside from Venison, the other players to come closest to wearing all the shirts were Steve Staunton – who never wore 2 – and Gary Ablett, who saw action in all except 9. A factor in this was the versatility of Nicol, who could play anywhere, so he kept 4 and Venison/Staunton/Ablett and others took the number of the player who missed out.

Perhaps strangely, given that he was a striker, Ronny Rosenthal also played musical shirts, missing out only on 2 and 5. He wore 3 twice and 4 once, with 9 being worn by midfielders Steve McManaman and Mike Marsh in those games.