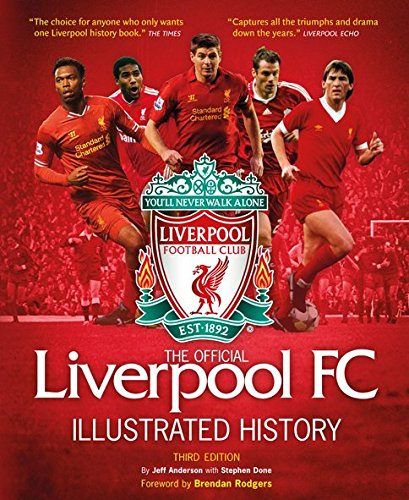 This is the third edition of a book that was originally published in 2002 and updated in 2004. Merseyside-born Jeff Anderson and Liverpool Football Club’s museum curator Stephen Done are again involved in this update, just as they were in 2004. Interestingly but perhaps unsurprisingly the five players featured on the front cover have also been updated. In 2004 this quintet consisted of Ian Rush, Roger Hunt, Steven Gerrard, Kenny Dalglish and John Barnes. A decade later those last three have retained their places but Hunt and Rush have been replaced by Sturridge and Carragher. This doesn’t diminish anything Hunt and Rush achieved at the club though. Both receive extensive coverage inside, as befits the combined total of six hundred and thirty-two Liverpool first-team goals they scored.

Liverpool F.C. is now in the one hundred and twenty-third year of its existence. Like most clubs there have been highs and lows, although it is fair to say that the highs have been greater than almost anyone else’s. Conversely the lows have been hard to bear because two terrible tragedies four years apart in the Nineteen-Eighties cost one hundred and thirty-five lives. The club has a rich history anyway and you have to mix the good with the bad because that is the only way you can get the overall picture. Parts of the story and indeed the whole story have been told many times before. But I doubt if the story has ever been told before as it is here with wondrous photographs, many of which are probably being published for the first time, supplementing the text. I suspect that Stephen Done’s ‘day job’ has been largely responsible for that because more items of club memorabilia must have passed through this man’s hands … or at the very least been seen by him … than any man in history.

This is a big, glossy hardback book … and it doesn’t come cheap but hardback books rarely are, not when they first come out anyway. In that respect it is difficult to assess what its target-market is because it isn’t a biography or an autobiography; it is a story. Perhaps it is mainly aimed at younger supporters keen to learn more about the club’s whole life rather than long-standing supporters who have read and heard most or all of it before ? Personally, I found the early chapters particularly interesting because there seems to have been a real revival in recent years of publications revealing what football was like before the First World War and between the two World Wars. I don’t think the text has changed greatly from the initial print-run in 2002 except of course that there has been much to add since the second print of 2004 with a fifth European Cup to be added to the roll of honour plus one more success in each of the two domestic cup competitions; to which can be added the turmoil of ownership issues and the sort of hiring and firing of managers that goes on at most clubs big and small.

Although it is hard to see how the cost of this book could have been set much lower, the cover-price might be out of reach for many considering it as a single present. It comes more into the category of what are usually described as coffee-table books. What is beyond doubt is that the club’s history has been covered in an extremely thorough way by two men for whom supporting that football club has become a way of life. So they are both to be commended for putting this update together in the way they have, especially with regard to the previously-unseen photographs.