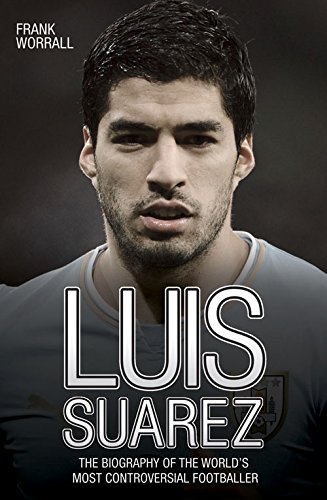 “The world’s most controversial footballer” has had such a complicated year that it probably isn’t mere chance that sees the timing of the publication of this biography coincide with the player’s own autobiography “Crossing The Line”. Each book will probably tell us much that the other does not. But each should make compulsive reading on its own. Frank Worrall is a proficient and prolific sportswriter who has built up a valuable network of contacts over the years. Even without having the advantage of interviewing the player himself as he prepared this book, Frank has researched as thoroughly as he usually does and gives a fascinating insight into the world of a highly talented but extremely unpredictable sportsman, a flawed genius if you like. Irrespective of how much the man himself is prepared to reveal in “Crossing The Line”, this biography carefully and cleverly explores the footballing brilliance of Luis Suarez and also his psychological weaknesses. It is quite an explosive combination, that’s for sure.

Frank Worrall describes Luis Alberto Suárez Díaz as being the “troubled genius” who became “arguably the best player of the modern era”. Suárez seems to be happily settled in Spain after three and a half years with Liverpool in England followed a similar length of time with Ajax in Holland. The journey that has taken the player from Uruguay to Spain has been long and difficult. Even though Barcelona might not be his final destination, it isn’t a surprise that it is his current location. Luis was devastated when his childhood sweetheart (and now his wife) Sofia informed him that her family would be re-locating to Spain. When representatives from Dutch club FC Groningen, in South America to follow up a lead on a quite different player, saw Suarez in action they immediately knew that they had been watching “someone special”. The player himself knew this was an opportunity that he could not turn down : “When the call came from Europe I didn’t think twice. The first thing that came to mind was being near Sofia”. It didn’t matter that nearly a thousand miles separated Groningen from Barcelona because it was still a lot closer than the vast ocean that had separated them before. The famous Catalan club first expressed their interest a couple of years into the player’s Ajax career and a year after Luis and Sofia had been married. It was a dream move then and it still was four years later. Luis had once told his wife-to-be : “I will became a great player and I will score so many goals that Barcelona will want to sign me”. He was true to his word and even when the player was barely marketable after a third biting incident inside four years Barcelona were still prepared to pay an enormous fee to acquire his services even though he was very much ‘damaged goods’.

At the time of his move to England at the end of the January 2011 transfer-window it is probably fair to say that English supporters of the sport knew Suarez more for his infamous handball against Ghana at the South African World Cup than they did about his disciplinary problems in Holland. Not many Liverpool supporters cared as he starting banging the goals in for his new club that “his genius came with an unfortunate notoriety because he could not control his temper”. Suarez was never sent off and only rarely cautioned while wearing Liverpool’s colours. But it didn’t take long for other aspects of his complex psyche to manifest themselves (the Patrice Evra racism and Branislav Ivanovic biting incidents). His club and its supporters stood by him and his manager even complained that “there seems to be one set of rules for Luis and another set for everyone else”. But what he had done was inexcusable and indefensible and a clear sign that he had a serious psychological problem, a problem that would recur and bring him massively negative headlines for the second World Cup in a row in 2014.

A random supporter who was aware that the player had previous expressed his feelings thus on the arrival of Suarez in England : “His disciplinary record is a worry. I hope he can keep a lid on his temper and do his talking on the pitch”. Well, he certainly did the latter! Eighty-two goals from one hundred and thirty-three first-team matches for Liverpool is testimony to the enormous contribution he made to the club’s revival under Kenny Dalglish and Brendan Rodgers; which is why it is so extraordinary that he should re-offend in front of a global audience so soon after nearly propelling Liverpool to an unlikely League championship. Only when he got to Liverpool did he realise that “there were people who could teach him how to deal with things differently and how to avoid the confrontations that had so scarred his otherwise brilliant career”. Incredibly, by doing what he did in Natal, he let down everyone who had ever tried to help him control his dark side.

Mister Worrall goes through the life and times of Luis Suarez very concisely from his humble beginnings and early life on the streets of El Salto to his move to his country’s capital city at the tender age of fourteen; from the devastation of the break-up of his parents’ marriage to the determination and belief that he would one day join his girlfriend in Europe; from the way he captivated football crowds in Holland to the idolatry (and vitriol) he received in England; from making his debut for Nacional in the same month that Liverpool won the Champions League to an extraordinary goals-per-game ratio in both Holland and England. It is quite a story and no doubt the player’s own autobiography will shed more light on an already remarkable career. It is a shame as Frank Worrall points out that by the time that career ends, wherever and whenever that might be, “he will, like Maradona in 1994, be remembered for all the wrong reasons”. Unless of course he can finally beat all his demons and only be remembered for the wonderful things he did on a football pitch.