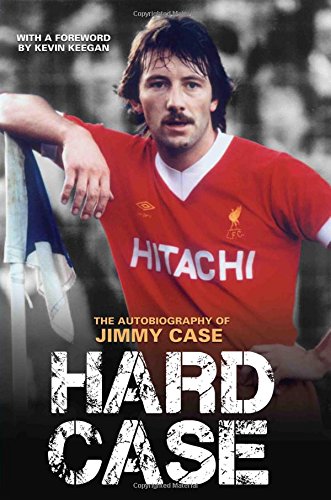 It is a common misconception that James Robert Case is often only remembered as a Liverpool footballer, probably because that is where he won nearly all his medals. But that is not a fair assessment of a quite remarkable professional career because Jimmy actually spent longer in total with three clubs on the south coast of England than he ever did while he was contracted to play for the red half of Merseyside. While goalkeepers often play on longer than outfield players it is unusual to find an outfield player continuing up to and past his fortieth birthday as Case did with the same skill, dedication and commitment that he showed when he first broke into the Liverpool first team when only just out of his teenage years. Hard Case is an appropriate title for a man who did not take any prisoners when he was playing. Even if he did not have quite the same reputation as a Norman Hunter, a Ron Harris, a Tommy Smith or a Graeme Souness this was a man you would definitely prefer to be playing with you rather than against you.

Every year thousands of talented youngsters share the dream that Jimmy Case had of becoming a professional footballer. But ability on its own isn’t enough. You need a certain amount of good fortune (being in the right place at the right time) and you have to be able to cope with rejection yet remain focused and determined. Case was overlooked for the Liverpool Schoolboys team whose head coach at the time was ironically Tom Saunders, the man who eventually nurtured him once he had become Liverpool’s Youth Development Officer. Jimmy’s physical stature was against him as he entered his teenage years. He wasn’t physically intimidated by playing against adults in local amateur football but he recognised that he was “too small and had to do something about it”. The hard work and countless hours he spent in a gym ultimately saw him force himself into South Liverpool’s team and not long after that Tom Saunders, who also worked as a club scout, came into the picture with the offer of a trial at Liverpool.

Case arrived at Anfield shortly before the start of what would be Bill Shankly’s final season as a club manager. Despite his manager’s legendary status, the player initially rejected the club’s offer of a professional contract following a successful trial. Jimmy knew it was important to have something to fall back on if he did not make it as a footballer. With two years left of an electrician’s apprenticeship he took a risk and called the club’s bluff in an attempt to find out how much they wanted him. They wanted him very much and a compromise was reached by which Liverpool took over his South Liverpool contract which meant that he could continue being an electrician as well.

Having filled out physically Case became a regular member of a Liverpool Reserves team that often included men with first-team experience who were returning from injury or who were out of the first-team picture and just needed some match action to keep themselves sharp. He says he learned much from this period, particular from watching Tommy Smith in matches and at training and that he tried to “base his game” around Tommy’s example, especially about “aggression and tackling” because he had already decided that he was not going to change the way he had played previously, that he would continue to “get stuck in, win the ball and not give it away cheaply”. Even at the end of Shankly’s last season as his twentieth birthday approached, the combative midfielder was disappointed not to find his name on the team-sheet for a senior match. But it soon became clear that Shankly’s successor, the canny Bob Paisley, also knew that he could not delay the youngster’s first-team baptism for much longer. That long-awaited first-team appearance came on the final day of the 1974/75 season and Jimmy played the whole 90 minutes as Queens Park Rangers were brushed aside 3-1 at Anfield. Paisley’s man-management skills were legendary. He left Case out of the team for the opening two matches of 1975/76 (a defeat at QPR and a home draw with West Ham) then brought him into the team for the third match against another London club, Spurs, at Anfield. Jimmy scored the second goal as his team turned a half-time deficit of 0-2 into a 3-2 victory. If Jimmy thought he had made it Paisley soon brought him back down to earth by leaving him out of the next six matches. However, by the turn of the year Jimmy was very much a first-team regular and he played in 31 of the last 32 matches of the season and picked up winners’ medals in both the First Division championship and the UEFA Cup. Five UEFA Cup goals were crucial to the club’s success in that competition with the last of those, against Bruges at Anfield, also helping to turn a 0-2 half-time deficit into a 3-2 win just as it had done against Tottenham eight months earlier.

Jimmy played in 229 competitive matches for Liverpool over the next five seasons winning three more domestic titles and two more European Cups. But at the very peak of his powers at the age of twenty-seven his Liverpool time was up and within a short time only Phil Neal remained at Anfield from the quintet that had appeared in all three European Cup finals (Ray Clemence to Tottenham, Ray Kennedy to Swansea and Terry McDermott to Newcastle were the others who moved on). Jimmy wasn’t desperate to leave but he knew that he faced a tough battle with Sammy Lee to retain his place in the team.  He just wanted to play and in that respect “it didn’t matter where I hung my hat” as long as he could continue to play the sort of game he had become used to. Case signed a five-year contract with Brighton and stayed for nearly four until he moved on to Southampton in the spring of 1985 having helped the Seagulls reach the F.A. Cup final of 1983. Jimmy’s mother tragically died during the evening of the final with the player poignantly reflecting that “success and the rewards that come with it don’t amount to much if the people you love aren’t there to share it”.

Southampton was a good move for Jimmy to make even if he did return to Anfield to score a stunning goal in a 3-2 defeat seven years after he had scored an equally stunning goal to knock Liverpool out of the F.A. Cup when he had been wearing Brighton’s colours. Six years with the Saints took Jimmy up to the age of thirty-seven but he still “felt fit enough to contribute on the field”  and, unhappy with the tactical approach of new Southampton manager Ian Branfoot, was approached by Bournemouth manager Harry Redknapp just a few hours after he had been released by Southampton. This led to a happy season further down the south coast, a season in which he played forty-nine matches to prove that he was still looking after his body well enough to cope with the physical side of the game. Jimmy became a bit of a football nomad for a few years before returning to Brighton as a player/coach as his fortieth birthday approached and then replacing Liam Brady as the club’s manager in November 1995, the same month in which he announced that his playing days were now over. A magnificent playing career came to a close. Even though there were no more winners’ medals after he left Liverpool in the summer of 1981, no supporter of any of the clubs he played for subsequently would dare to suggest that he wasn’t a winner in every other sense of the word. It must have been a real privilege and a pleasure for Andrew Smart to sit down with Jimmy Case and discuss his life and times. Andrew has got to the very core of what made Jimmy Case tick and the result is this quite beautifully-written book.

Kevin Keegan speaks warmly about his former team-mate in the foreword to this book asserting that Jimmy “never tried to do things he knew he couldn’t do, and everything he did was 8 or 9 out of 10” apart from the ferocity of his shooting, for which Keegan gives him the maximum ten. Other soccer luminaries like Alan Shearer, Liam Brady, Kenny Dalglish and Jimmy’s great pal Ray Kennedy say much the same in the closing chapter with Brady sharing Keegan’s bemusement that Case never received a full England cap under Ron Greenwood or his successor Bobby Robson. The Irishman thinks that being at unfashionable clubs like Brighton and Southampton effectively closed this particular door while Keegan believes that the number of Liverpool players in some of Ron Greenwood’s squads (no fewer than six represented England against Switzerland at Wembley in 1977 plus himself as a former Liverpool man) made it very difficult to increase the number from a single club.  Keegan is right that Case won’t be losing any sleep about not representing his country at the most senior level. But it did years later give him a marvellous opportunity to deliberately mishear a question from one of England’s most capped outfield players, Kenny Sansom. Sansom’s “How many England caps did you win, Jimmy?” got an answer of “three” but when the former Arsenal man claimed that figure was wrong Jimmy’s response was “Sorry Kenny, I thought you said European cups”!!

Most football books have factual errors in them, usually avoidable. Much as I would have liked to add Hard Case to the very short list of books that are error-free unfortunately I can’t, although I can’t decide whether this is down to the player’s memory or insufficient research. To infer that Bill Shankly was unhappy that the club’s famous red shirts had a sponsor’s name on them is clearly absurd (Shankly retired in 1974 and the club did not have a shirt sponsor in Hitachi until 1979); Terry McDermott was once sent off in a Merseyside derby at Anfield but it wasn’t, as Jimmy claims here, the 1976 match in which David Fairclough scored a stunning late winning goal (McDermott’s dismissal came four seasons later); and, also in 1976, Wolves had not already been relegated before they met Liverpool at Molineux on the evening on which Case became a First Division champion for the first of four occasions (had Wolves beaten Liverpool and Birmingham lost at Sheffield United on the same evening, Wolves would have survived at Birmingham’s expense). But probably it is unrealistic to expect a professional footballer to remember every incident from every day. Nobody who works in an office or a factory can so why should someone who plays sport for a living ? It is the anecdotes not the match-facts that make this such a good read anyway but it is certainly true that supporters often remember the match-facts long after the players have forgotten them.