Each Saturday hundreds of thousands of football “fans” get the maximum pleasure from the most popular of British games.

Let us introduce you to a Stoke Mandeville man who for 18 seasons was in the top flight of professional “soccer”; who played for England on three occasions and also appeared in a number of international trials; who has in his possession the most-difficult-to-win “soccer” medal of all – a Division 1 League championship medal and who has won every honour big time football has to offer with the exception of a Cup winner’s medal.

The name is Tom Lucas, who is now “mine host” of the “Woolpack”, Stoke Mandeville. He played for Liverpool for 18 seasons.

Tom, who was still playing big football in the late 1930’s look back on his playing days with considerable modesty, but, none the less, with a great deal of pleasure.

“I took up professional football,” he says, “because I loved the game. I have no regrets and would do the same again if it were possible to start all over again.” 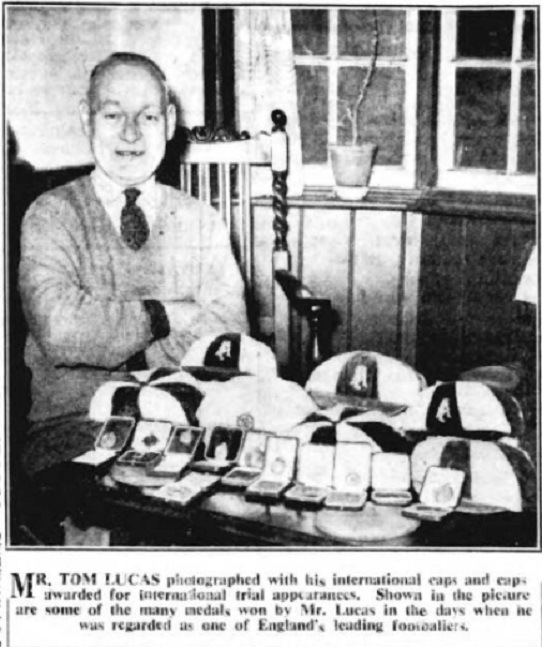 Wonderful souvenirs of a distinguished playing career are his international caps.

In 1921 he played against Ireland; in 1924 he was selected for the team which met France; in 1926 he turned out against Belgium.

In addition, he has in his possession four caps, which, in those days were presented to those who were chosen for international trial matches.

Included in his souvenirs are also numerous medals, including one awarded him when he received the honour of being chosen for the Football League against the Scottish League.

Tom, in his days, was one of the best known full backs in the game. Whether he played on the right or left flank made no difference to his ability, and naturally we asked him this:

“Who was the greatest winger you ever played against?”

This was a question which apparently gave Tom no trouble. Like a flash came the answer, “Alan Morton, the “blue devil” of Glasgow Rangers.”

Everybody interested in football knows all about Alan Morton, who was one of the most polished players ever to kick a ball.

Mr. Lucas recalls that he found Morton so difficult to keep in check that he was still perspiring as he was going home long after the Inter-League game in which he opposed Morton had finished.

During his time at Liverpool that club was star-studded with internationals. For instance, on the club’s books at one time were two international goalkeepers – Elisha Scott and Kenny Campbell – and three international full-backs – Tom Lucas, Mackinlay and Longworth, and needless to say competition for places in the first team was razor keen.

In addition to this, there were two internationals in the half-back line – Tom Bromilow and Jack Bambers.

Mr. Lucas rates that great Irishman Elisha Scott, as the greatest goalkeeper he ever saw, and those who had the pleasure of seeing Scott in action will be inclined to agree.

It may not be generally known, however, that Scott was so sensitive about his somewhat slight appearance that in addition to the normal shin-pads he always wore two pairs of stockings to give his legs a “build up.”

We also asked Mr. Lucas the player he rates as the greatest centre forward he ever met during his long career.

Here Tom’s vote goes, without a great deal of hesitation to another man whose name is a household word in football – “Dixie” Dean, who led the Everton attack with such craft and dash for so many years.

“Dixie” was, of course, possibly the greatest of them all when the ball was in the air.

His wonderful timing and accuracy made him absolutely deadly in front of goal.

We switched the conversation to the great inside forwards with whom Mr. Lucas came into contact.

There can be no possible doubt that Tom has the greatest respect for that wonderful ball player Charlie Buchan. “A flick of his foot,” says Mr. Lucas, “and an attack was being built up before you knew it.”

He also paid tribute to that great player, Harry Chambers, of Liverpool, who was a master in his day.

Many of these names must bring back memories to those who have followed the fortunes of the big “soccer” clubs. There was Hughie Gallacher, that masterly little Scot who could do everything save make the ball talk, and, of course, many of Mr. Lucas’s former colleagues at Liverpool were “stars” in their own right.

Forward such as Lacey, Dick Forshaw, Sam English and Fred Hopkin would bring a King’s ransom in the present day transfer market.

Mr. Lucas tells us that he most thrilling game in which he ever took part was an Inter-League game between England and Scotland.

To the best of his recollection – and it is difficult to recall the results of individual matches when one has taken part in hundreds of big games – the score was 5-4.
“What I best remember about this game,” he says, “was Alan Morton. He was a wonderful player.”

During all his career, Mr. Lucas was never sent off the field, although he admits to being cautioned once. This happened under rather unusual circumstances. He was playing against Bristol City in an FA Cup match when scored what seemed to most people an offside goal.

Tom immediately appealed to the referee and in the excitement of the moment grasped the official by his blazer with such force that a button was torn from it. The result was not unnaturally a caution.

He believes the biggest strain on any player is to be a member of a side which has a first class chance of winning the Division 1 championship.
“Every match you play becomes a cup-tie,” he says, “every team is all out to stop you, This sort of thing can last for the greater part of a season and may impose a greater strain on a player than ‘death or glory’ efforts in the English Cup.”

But it was the coveted English cup which provided Mr. Lucas with one of his greatest disappointments. He still recalls vividly the season when Cardiff beat Arsenal in the final and thus took the Cup out of England for the first time.

In the round before the semi-final Liverpool had played Cardiff only to go down 1-0 when a treasured cup winner’s medal must have seemed very near to Tom and his Liverpool colleagues. He was thus denied the pleasure of ever appearing at Wembley.

He learned his football the hard way by playing on a cinder heap at St. Helen’s, in Lancashire.

From there he graduated in junior local football with a side known as Peasley Cross, and later had one season with Heywood, members of the strong Lancashire Combination.

Then he attracted the attention of Liverpool, went there for a trial when he was about 17 and stayed in first-class football for 18 seasons.

He attributes his success to his ability to anticipate what the other fellow was likely to do, and a highly developed sense of timing which enabled him to meet the “big ‘uns” on terms of equality when the ball was in the air.

Towards the end of his career he moved to Clapton Orient and spent one season with that club’s “nursery” team, Ashford, as player coach.

Fourteen years ago he took over the “Woolpack,” and now admits that he has not seen a first-class football match for 12 months.

He believes that football has not declined since his own playing days.
“There may not be quite the same science,” he says, “but the game is certainly faster.”

He has no comment to make on the present day transfer system, but it may be significant that he himself preferred to stop with one club for 18 seasons, and obtain three “benefits” in that period, and during at least a part of his playing career there was one international goalkeeper and one international back with the club who could not be included in the first team.

It seems more than likely that any international who consistently found himself out of the first team in these days would be asking for a transfer without a deal of delay.

The only really serious injury he sustained during all those years of football came when he had cartilage trouble. The source of the trouble was removed and he continued to play as well as ever.

The secret of success

And, of course, we did not allow Tom to escape our questioning without offering tip or two to present day young players. Here is the secret of success, as Tom sees things, which all young full-backs should bear in mind:

“Work up an understanding with the man playing in front; in other words, get to know thoroughly the methods of your wing-half. Never, under any circumstances take your eyes off the ball. Cultivate the use of both feet, and never allow a winger to cut in on the inside. Let them run down the line towards the corner flag as hard as they like,” said Tom.

“It’s only when they get inside that the real danger is done.”

It only remains to say that only once in his long career did Tom manager to get his name amongst the goal scorers. He had the pleasure of converting a penalty in a match against Preston.