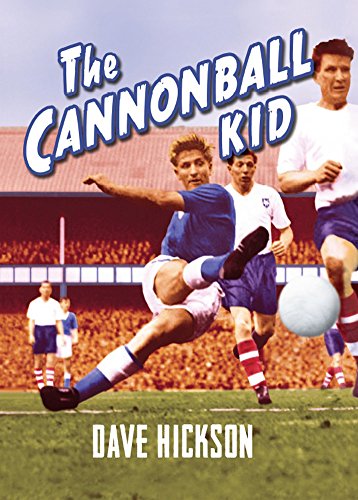 By Dave Hickson with James Corbett
Published by deCoubertin Books

Although it is nearly fifty-five years since he played for the final time in Everton’s first team … and nearly fifty-three and a half years since he played for Liverpool’s … Merseyside supporters of a certain age still accord David Hickson legendary status, although to be fair this is more by Blues than by Reds because he had two spells at Goodison Park in the decade and a half that followed World War Two whereas his time at Anfield was much briefer (less than eighteen months separated his first and last appearances for Liverpool). Dave even became one of only three men to sign for Liverpool, Everton and Tranmere when he joined Rovers in 1962 although one of the other two … half-back John Heydon (the third being goalkeeper Frank Mitchell) … never actually appeared in Everton’s first team in a competitive match.

The Nineteen-Fifties are not years that will be looked on fondly by most Evertonians … or Liverpudlians for that matter. Football, both playing the game and watching it, became an escape from the post-war austerity that Great Britain found itself in. In his introduction to this evocative book James Corbett affirms that a colourful character like Dave Hickson “restored pride in hard times and offered hope where there was none” with the player himself remembering that “although we never had much, we never wanted for anything either”. James has worked tirelessly on this book. Even though he was in the privileged position of being able to sit down with Dave and discuss his whole life not just his playing career, it is quickly obvious that his commitment to this project was absolute; as indeed was Dave’s even though he knew it was possible (and sadly this is the way it turned out) that the subject of the book would pass away before the printing-stage was reached. Dave’s own reminiscences alone could have filled this book. But James has managed to tap into the memory-banks of many people who knew him well … those who watched him as boys and young men, those who played alongside him, those who socialised with him and many who only met him once but for whom that one meeting was memorable.

Good player though he was there is little doubt that Hickson’s early footballing development was influenced by a few luminaries of the past, in particular the former England international Tom “Pongo” Waring, with whom he shared striking duties in the Ellesmere Port Town team when Dave was only just out of school and Waring had nearly two hundred and fifty Football League goals to look back on. Another huge if somewhat fortuitous encounter came when he was just starting his National Service and discovered that the coach of the Cheshire Army Cadets team he found himself playing for was none other than one William Ralph “Dixie” Dean, a man who had scored even more League goals than Waring, most of them while wearing Everton’s colours. We can only speculate how much the young Hickson learned from being in close contact with these two prolific goal-scorers. But the reality is that is was likely to have been a lot. Even before he met Dean for the first time Hickson had been recommended by an Everton scout in the Ellesmere Port area and that had led to him being offered a trial and an offer to play for the Blues at an amateur level. Although he had never even seen Everton play live, this was the start of a lifetime of affection for the Goodison Park club about whom he would later famously declare that although he would have “broken every bone in my body for any of the clubs I played for – but I would have died for Everton”.

The Blues were relegated in 1951 when Dave was 21 years old. He was one of the young men trusted to get the club back into the top division. Fourteen league goals in 1951-52 followed by twelve in 1952-53 was a decent return for a young man taking his first steps in the professional game. But finishing positions of 7th and 16th showed that the journey back to the top was not going to be an easy one. A year later that journey ended in success for Dave and his team-mates, ironically watching Liverpool drop into the Second Division as Everton returned to the First. Years later he described this promotion as “the highlight of my career”.

Hickson established himself as a better than average First Division player but early in the 1955-56 season manager Cliff Britton left him out of the team and this led to the forward believing that his future lay away from the city of Liverpool. He joined Aston Villa but only played in 12 league matches for them before moving on (still in 1955) to Huddersfield Town, whose manager was Bill Shankly’s predecessor there and good friend from their days together at Preston, Andy Beattie. By the middle of 1957 Hickson was back at Everton and reflected that “it was the happiest day of my life when I returned to Goodison Park”. It looked as if he would be happy to see out his playing career there but another Everton manager, Johnny Carey, also dropped him early in a season (1959-60) and this led to the cross-city move to Liverpool in November which although controversial was a way out of the impasse he had found himself in on the other side of Stanley Park. Dave remembers that “Shankly was always all right with me but each time I was under his management I was someone else’s signing” and that was quite a strange situation to be in not once but twice (Beattie had signed him for Huddersfield not long before Shankly’s arrival there and Phil Taylor had signed him for Liverpool not long before Shankly’s own arrival at Anfield). But things gelled immediately with Hickson scoring twice on his debut for Liverpool the day after signing and adding another 19 goals before the season closed and sharing an outstanding partnership with a young Roger Hunt, who plundered 21 league goals in his first full season as a regular in the team. Dave was not a player to shirk a challenge. He would throw himself regularly into the danger-zone, received many nasty injuries as a result of that approach and also gained a reputation of being over-zealous in his challenges, although he is keen to point out that he was only sent off three times in his career and that two of those were for talking back to the referee.

Dave’s time as a Liverpool player was only brief, Even though he was starting to receive the same cult status he had enjoyed at Everton, Bill Shankly dropped him in the spring of 1961. At a time when the maximum wage was still in force in English league football Hickson discovered that non-League clubs did not have to abide by Football League rules and he spent a short time with Cambridge City before returning to the Football League with first Bury and then finally Tranmere Rovers.

Most football books dissect and discuss the modern game. It is a pleasure to find a book that looks back at a different time, a bygone age if you like, to a time when the laws of the game were much the same as they are today but when attitudes and Society were very different. Dave Hickson played at a time when “you were only ever on a one-year contract. If you get seriously injured you were at the mercy of the club”. Dave played “against some of the greatest defenders there were and also some of the hardest”. He picks out Bobby Collins as “probably the best player I ever played alongside” but the testimonies are many from those who have fond memories of playing alongside him. At the peak of his powers a very different book might have been written about Dave Hickson. Legendary goalkeeper-turned-journalist Frank Swift was keen to tell Dave’s story in the Nineteen-Fifties but his death in the Munich air disaster put an end to that. Half a century and more later there has been so much more to pack into a book, including the facts that Dave was still playing in his mid-seventies and also helped raise significant sums of money for The Lily Centre, a breast-cancer support group in Liverpool, as well as being a hugely active member of the Everton FPA (Former Players’ Association).

Hickson bridged a gap between Red and Blue on Merseyside that even extended to the local paper with the Echo on the day he scored his first senior goal for Everton reporting that that he “chased even the most remote chance with a Liddell-like determination”. He might never have picked up a winners’ medal even though he deserved one for the way he conducted his life, humble and proud to the end. In the middle of the second decade of the 21st century, we will never see his like again. Publishers deCoubertin and especially James Corbett have ensured that he will not be forgotten. James accepts that this “is not a conventional autobiography”. But it isn’t important whether James is the co-author or the biographer. What IS important is that this wonderful story has finally been told.

Buy this book from Amazon: Hardcover or Kindle