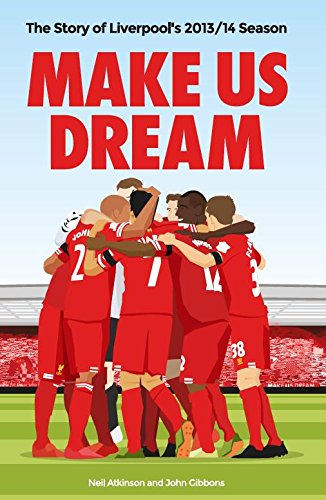 If there was one inevitability that would occur in the wake of Liverpool Football Club’s extraordinary and dramatic 2013-14 season, it was that much would be written about that season even before the next season began. Whilst accepting that inevitability it is unfortunate that two different authors chose exactly the same title for their books. Presumably neither the authors nor their Publishers knew about this or, if they did, neither was prepared to choose a different title ? “Make Us Dream” is the wording on a well-known banner displayed on the famous Spion Kop at Liverpool home matches (and other places). It … and “We Go Again”, the title of another book recently written about this same season by Liverpool Way editor David Usher … became a sort of rallying cry as the club’s bid to become English champions for the first time since 1990 reached its peak.

It is unfair to compare Neil Atkinson and John Gibbons’ “Make Us Dream” with the book that has the same title by Neil Collins. Yes, people who have read both are bound to compare them but each deserves to be treated on its own merits. Neil and John can rightly be described as co-authors of this book because both have made significant contributions to it. But they have generously allowed other competent writers to add their own thoughts in the same way that Paul Tomkins did in his 2013 book “These Turbulent Times”. Neil and John have much in common with Paul Tomkins anyway. The latter began writing for the club’s official website in 2005 and this led to the birth four years later of The Tomkins Times, a subscription-based online forum or sounding-board for discussing and dissecting the club’s business on and off the field which continued to grow and flourish. Messrs. Atkinson and Gibbons have been heavily involved with their equivalent of The Tomkins Times, The Anfield Wrap, a similar sounding-board that continues to grow and is visited in large numbers by those who share their devotion to the football club and also share in its dreams for a happy and successful future.

All forty-three competitive matches are covered in a tidy chronological order with Neil keen to point out that he has collected a set of match-reviews not match-reports. He is right to do so because the reviews in this book cover much more than you would find in a conventional match-report in a newspaper or magazine. They give the bare facts of each match yes but these are supplemented by the insightful personal thoughts and feelings of the authors as they enjoy a roller-coaster ride that gathers momentum through the winter and spring months. Neil demands that we “look at this, this red lava streaming down the mountain, enveloping everything in its path from a volcano so many thought had fallen dormant”. Perhaps that is the key to the whole enterprise. This journey was as thrilling as it was unexpected because not for a long time had the club been involved in a challenge for the English title right up to and including the final round of fixtures. As Ben Smith aptly puts it in his foreword, L.F.C. has again become “a football club ready to create new history”, a club no longer held back by its past.

There are many heroes but few villains in this heroic tale of a group of young men who nearly pulled off a quite astonishing feat. Even though he would make dreadful errors in successive away matches at The Hawthorns and Craven Cottage, Kolo Touré was an early believer in what could be achieved by the squad he had just joined. As a previous Premier League winner with both Arsenal and Manchester City “the Ivorian knew what the business was about and spread, through word and deed, the idea that the business could be done”. One of the major pluses during the season and especially during the exciting run-in was watching the progress of Raheem Sterling whose remarkable form belied the fact that at the end of the season he still had several months of his teenage years to live through. When Everton were blown away at Anfield at the end of January Sterling was “barely recognisable from the player who had struggled so badly at Hull less than two months earlier”.

Both Neil and John discuss the stress a dedicated football supporter goes through, especially when it really does look as if the dream is going to come true. Six of the club’s last seven fixtures of the season were played on a Sunday afternoon with other results crucial to the dream taking place on the previous day. “Having to put ourselves through it all over again after an agonising Saturday where we hadn’t even played” is John’s way of describing the mental torture a real fan goes through.

In the end a valiant bid falls just short. When did Hope turn into Belief ? In Kate Forrester’s words “the derby was the point at which our expectations and hopes had begun to properly change”. In the next home match (Arsenal) Ben McCausland witnessed not just “the best twenty minutes of football I have ever seen” but “the best twenty minutes of anything I have ever seen”. Despite the pain of seeing the dream crushed right at the end, our co-authors react with pride and optimism about what all Liverpool supporters lived through during these extraordinary nine months : “This was the most fun you have had in your whole life” (John) would be echoed by a generation of match-going Reds who still await the consistent collection of titles that the previous generation witnessed. Neil, however, doesn’t want to get off the roller-coaster, so thrilled has he been by the ride : “I need it not to stop. It can’t stop. It can’t be allowed to stop” is included in his heartfelt closing lines. “When everyone is together sheer defiance can sometimes be enough” (John). It wasn’t quite enough to take the big prize that was on offer but the collective defiance shown by the whole playing-squad, the entire fan-base and a quiet but very focused manager and his coaches made it clear that nobody wants to look back on this season with anything but great pride and happiness. “Make Us Dream” is a beautifully-written book and it deserves the acclaim it will definitely receive in literary and sporting circles.

Click here to buy this book from Amazon (Paperback)

Click here to buy this book from Amazon (Kindle)