Celebrating Match of the Day 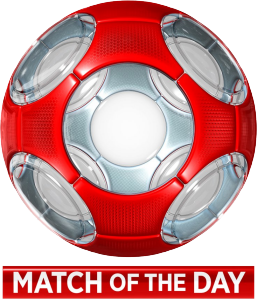 With every Liverpool first-team match televised somewhere around the world, it is hard for today’s followers of the sport of football to remember a time when supporters were starved of watching the club they supported through the box in a corner of their living-room. But there was a time when the only live televised football was the F.A. Cup final and possibly the occasional England international if all the tickets had been sold. That all changed when the BBC’s “Match of the Day” came along fifty years ago. Live league matches were still a couple of decades away but at last supporters could settle down on a Saturday evening and watch highlights of their team in action. “Match of the Day” has survived, albeit in a vastly-changed format, but it is interesting to take a look back to when, how and why it started.

The British Broadcasting Corporation launched its new football programme on the opening day of the 1964-65 Football League season, selecting Liverpool v Arsenal for its first match with legendary commentator Kenneth Wolstenholme declaring in his opening lines “Welcome to ‘Match of the Day’, the first of a weekly series coming to you every Saturday on BBC2. You can hear we’re in Beatleville for this Liverpool v Arsenal match”. BBC2 had only been launched in April 1964 so it was still trying to work out what to show and when to show it. Its decision to screen highlights of English football matches was both bold and inspired, even if the audience in its early days was only about 20,000 so less than half of the crowd that attended Liverpool v Arsenal live at Anfield during the afternoon of Saturday 22nd August 1964. Many clubs were unhappy about this new programme, fearing a drop in attendances. The BBC agreed not to reveal which match was being shown until all the Saturday afternoon matches had been completed and this agreement lasted until 1983 several years after the popular programme had made the move to BBC1 from BBC2 in 1966. ITV did not come into the picture until 1968 when it started to show Football League highlights on a Sunday afternoon. The BBC’s response was to start showing highlights of more than one match each week, something that ITV inevitably copied.

To legendary striker Roger Hunt fell the honour of scoring the first goal on the BBC’s new programme as he hooked Ian Callaghan’s cross up and over former Liverpool goalkeeper Jim Furnell and into the Kop net. Liverpool’s other goals in this 3-2 home victory were scored by 20-year-old Gordon Wallace. Gordon never scored for Liverpool again whereas Roger would hit the net for the Reds another one hundred and forty times before moving on to Bolton Wanderers at the end of 1969.

Most of the early matches came from the top division. Highlights of only a single match were screened on a Saturday evening, although the BBC was contractually obliged to show three Second Division matches and this was soon extended to include the Third Division and the F.A. Cup. Even one Fourth Division match (Oxford United v Tranmere Rovers) was broadcast halfway through the first season. After opening the show Liverpool did not feature again until their match at West Ham was shown at the end of February 1965, Roger Hunt again scoring but this time in a 2-1 defeat. One more of our league matches was shown before the end of this season, a 3-0 defeat at Old Trafford that saw Manchester United close in on the League championship. Kenneth Wolstenholme was still the man behind the microphone a week later as Liverpool picked up the F.A. Cup for the first time with Hunt continuing his useful habit of scoring when the BBC’s cameras were trained on him.

In 1965-66 Liverpool’s unsuccessful defence of the cup was shown, a 2-1 home defeat by Chelsea with You-Know-Who again scoring our goal. Highlights of our away league matches at Chelsea, Arsenal and Fulham were all broadcast with the BBC often selecting North v South matches and local derbies, even if the first Merseyside derby was not picked until December 1969, the occasion of the famous Sandy Brown own-goal at Goodison Park.  Despite the Power of the Kop being perhaps at its peak, only two home league fixtures were selected in 65-66, a 1-0 win over Tottenham in March (Hunt again!) and the 2-1 win over Chelsea in April (two more for Roger) with Shankly’s second League title having already been safely secured.

Chelsea away was again picked in 1966-67 with this Christmas Eve encounter at Stamford Bridge being the first live Liverpool match I ever attended. Home to West Ham (two goals for Peter Thompson) and away at Tottenham (two goals for Jimmy Greaves) were the only other occasions Liverpool appeared on “Match of the Day” in this season. Only one home match was picked in 1967-68 (when Tony Hateley scored twice in front of the Kop against the team we had just bought him from) but as many as six away, including the F.A. cup-tie at Bournemouth in January. Wins at Old Trafford and Elland Road in the closing weeks of the season were hugely important in the destiny of the title, with Manchester City taking advantage of these two slip-ups by their rivals for top spot.

Some iconic goals of the past still talked about today by older supporters can still be found thanks to footage of old matches that were shown by the BBC. The rampaging run from his own half by Emlyn Hughes against Spurs at Anfield in December 1968 is just one example of many, when the visiting defenders backed off until Crazy Horse drilled a shot past Pat Jennings from the edge of the Anfield Road penalty-area. Just over three months later the BBC cameras were again at Anfield to see Roger Hunt’s 300th career goal against Wolverhampton Wanderers. Roger’s final Liverpool goals, two as a substitute against Southampton at Anfield in October 1969, were also seen by “Match of the Day” viewers, although this time the commentator was Barry Davies as the BBC prepared for Kenneth Wolstenholme’s imminent retirement. A month later the BBC returned to Liverpool to screen “Match of the Day” in colour for the first time with goals from Chris Lawler and Bobby Graham seeing off West Ham United.

A new decade began with a quite dreadful and unexpected F.A. Cup quarter-final defeat at Watford with Barry Endean’s goal being a watershed moment in the club’s history. With the BBC now showing highlights from as many as three matches on a Saturday evening, Liverpool’s appearances became more frequent during the 1970s and even more so when a regional match was shown after the main match which had been shown throughout the network. At the end of the decade the BBC was forced to share matches with ITV and the era of live televised league matches was moving closer and closer but not before Liverpool’s championship celebrations were shown on “Match of the Day” after fixtures against Tottenham in 1982 and  Notts. County in 1984 as well as the five-goal trouncing of Everton at Goodison in November 1982 and an emotional John Toshack bringing his Swansea team to Anfield only four days after Bill Shankly’s death in 1981.

After years of having highlights of their matches shown, it was time for “Match of the Day” to start showing Liverpool matches in their entirety. The club’s ‘full match’ BBC debut came on a Friday evening in January 1984 when John Motson commentated on a third round F.A. Cup-tie that brought both Terry McDermott and Kevin Keegan back to Anfield. Two weeks later Motty also did the league match at Villa Park when Ian Rush scored a stunning second half hat-trick on an ice-rink. But another Friday evening match eight weeks later saw Barry Davies behind the microphone as Liverpool slipped up at Southampton.

We were still seeing highlights of our matches on Saturday evenings but the Friday night matches had not yet run their course with a defeat at Tottenham in October 1984 being followed by a win at Queens Park Rangers a few weeks later. In 1985-86 the BBC showed no matches at all in the first half of the season because of a contract dispute with the Football League. However, once that dispute was settled, Liverpool returned to being one of the BBC’s favourite clubs to show live as we closed in on the League and F.A. Cup Double for the first time. A crucial Sunday afternoon 3-2 victory at Vicarage Road against Watford in January (Barry Davies commentating) saw the team reclaim third place in the table; and a similarly-important win at White Hart Lane in March (John Motson) saw even more pressure being put on the two clubs above us, Everton and Manchester United. But Liverpool supporters had to settle for evening highlights as the team took over at the top by beating Manchester City at Anfield on Easter Monday and then sealed the title at Stamford Bridge on the first Saturday in May.

In 1986-87 the BBC only showed four Liverpool matches live … Sunday league games against Everton and Chelsea, the F.A. Cup-tie at Luton and the League Cup final against Arsenal. There were only three live BBC matches in 1987-88 (Newcastle and Everton in the league plus Everton in the cup) but plenty of highlights from what turned out to be a record-equalling League campaign. 1988-89 began with highlights of the Charity Shield Wembley win over Wimbledon and the BBC also showed our cup-tie at Millwall live and highlights of the next two rounds against Hull City and Brentford. Highlights of the semi-final should also have been shown but the BBC kept its cameras rolling during a very emotional afternoon in Sheffield and broadcast a heartfelt and equally-emotional programme fronted by Desmond Lynam in the evening instead.

Then the Sky bandwagon came rolling into town to threaten the BBC’s footballing existence. But the Beeb had been a major player for so long that it wasn’t going anywhere. It lost its rights to show live matches but regained the right to show highlights and could for the first time show goals from  all the Premier League matches played on that day not just a select few. The BBC and “Match of the Day” seemed happy enough until the Premier League awarded highlights rights to ITV for three years in 2001. ITV’s The Premiership show was not a success and the BBC came back into the picture in 2004 and “MotD” could now cover all Premier League matches on a Saturday with cameras and commentators at every ground. Five years later the BBC retained its rights to show highlights of Premier League matches and that is pretty much the situation that applies today with “Match of the Day 2” showing the Sunday matches twenty-four hours after “Match of the Day (1)” has shown the Saturday matches. 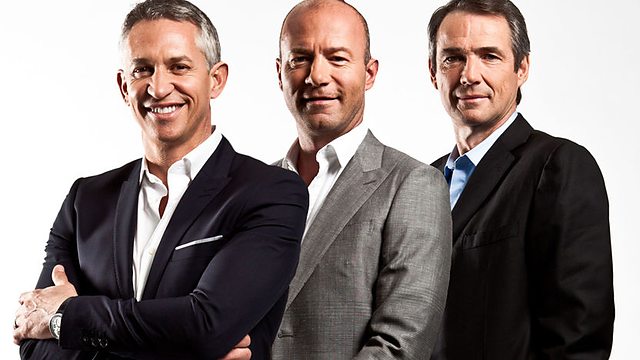 Fifty years have passed since Sir Roger’s audacious chip over Jim Furnell on 22 August 1964. That day was the start of a long association between Liverpool Football Club and the British Broadcasting Corporation, an association that has not been without its problems but on the whole has been extremely positive for both the football club and the broadcaster. Today’s frontman Gary Lineker was only three years old when “Match of the Day” showed its first match. Alan Hansen was only nine years old when Roger scored that goal but has just left the football punditry business after 20+ years. Life changes but goes on for all of us. The mid-Sixties hunch that British television viewers might like to regularly watch football matches was prophetically correct. “Match of the Day” is alive and well and looking forward to the next fifty years.