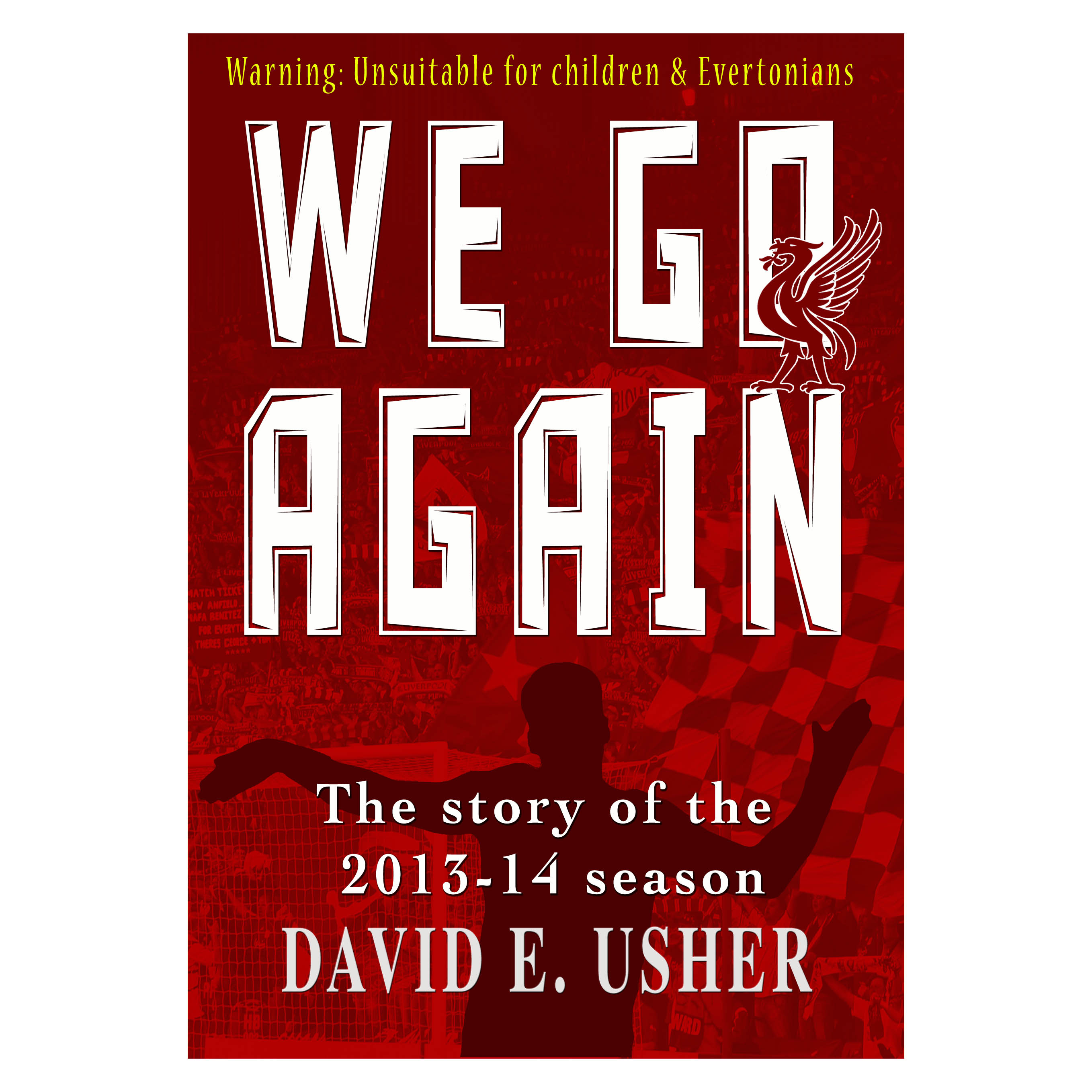 If it’s summertime, there must be a new Dave Usher book out!. I wrote about his account of the 2012-13 season, “Like I Say”, that I hoped that “the next time he writes about a year in the life of Liverpool Football Club, he will have tangible success to report back on not just the promise of success.” It so nearly happened. “We Go Again” was a single victory away from being “Back On Our Perch” (as English champions) but it was such an agonisingly close near-miss that it deserved to be covered in detail by someone who knows the club inside out. Dave isn’t the only person to have had a book published about the 2013-14 season. “Make Us Dream” is just one alternative. But nobody could have covered this season better than Mister Usher, who has already forgotten more about Liverpool Football Club than most of us will ever learn, and whose mastery of the English language is already well-known when it comes to writing about the football club he has followed so passionately all his life.

“We Go Again” follows the same pattern of Dave’s two previous books with the author analysing each Liverpool match in minute detail before commenting on the other league and cup matches that took place at the same time. With hindsight it would have been easy to alter a lot of what he wrote as the season progressed. But he stays true to the feelings he had at the time. That might have rebounded on him but it actually turned out to be remarkably prophetic in many cases : in October he wrote about Crystal Palace “we’ll probably go there and concede three though”. It happened; also in October “Southampton have got a great shot at finishing 8th”. It happened; after losing at Manchester City on Boxing Day “Would you bet against us beating them at Anfield ? I wouldn’t”. It happened; and, as the season reached its thrilling climax “Imagine if Borini got the winner ?” as he previewed the Chelsea v Sunderland match at Stamford Bridge. Perhaps I should be asking Dave to choose my weekly Lottery numbers ?!

Having finished 7th in 2013 expectations going into the season were not particulary high. A September League Cup defeat at Old Trafford  meant that we were “knocked out of one of the only two competitions we had any chance of winning”, the other being the F.A. Cup. “We only have one chance left of lifting a trophy this season” writes Dave ruefully after this loss because nobody in their wildest dreams expected Liverpool to mount a serious challenge for the title itself.

Alex Ferguson’s retirement meant that someone else had to be the fall-guy manager and Fergie’s successor, the out-of-his-depth-from-day-one David Moyes, slips easily into the vacant seat while one of its previous occupants, Stoke’s Tony Pulis, receives much praise for the way he turned around Crystal Palace’s fortunes after taking over from Ian Holloway. If Moyes unwittingly gave the author “a laugh a minute” material which he savagely exploits, players are not exempt from the tongue-lashings they receive. A previous favourite, Jason Puncheon, now at Crystal Palace, is still excluded from criticism, as is Sunderland’s goalkeeper Vito Mannone, even though he looks as if he “must have gone into the witness protection programme”. The player himself might not react favourably but I like to think that Jack Wilshere’s team-mates would understand why he “looks like he should be riding a BMX around a council-estate selling stolen fireworks”; that Newcastle’s Mathieu Debuchy “has the positional sense of a lemming on smack”; and that Palace goalkeeper Julian Speroni’s face “definitely looks like it’s been made up of parts he’s salvaged from other people”. Liverpool’s own players do not escape. Picked as one of four central defenders to play in the back four in an early-season home match against Southampton Mamadou Sakho in an attacking capacity was “as much use as an ashtray on a motor-bike”. Comparisons like these bring the reader as many chuckles as the seriously unpleasant stuff about the new Manchester United manager and one of his new charges and the new master of simulation, Adnan Januzaj.

The team’s performances in the second half of the season were mesmerising, a long unbeaten run that saw comprehensive victories over rivals like the two north London clubs and our ever-bitter city neighbours. As things hotted up with the matches fast running out every Liverpool supporter knew, as Dave himself knew, that “we’re on the verge of doing something that we will cherish for the rest of our lives”. Ultimately the challenge fell heart-breakingly short.  It is easy to look at the Chelsea home match as the day the dream died. But every other league defeat was crucial too, especially the dreadful reverse at Hull in early-December.

Luis Suarez gets plenty of coverage too, just as he had in previous seasons. For the most part it is the high praise that the little magician deserves but in his final chapter Dave is already looking forward to life without the man whose goals and general play nearly brought off what would have been considered impossible twelve months earlier. Liverpool’s manager receives praise for a tactical awareness when setting his team up that few could criticise. Brendan Rodgers is still young; his work at Liverpool is far from over. He will be hurting as much as anyone at the way the season ended. But he knows, as do all Liverpool supporters, that when the serious business resumes in August “we go again” is a mantra that will apply to everyone connected with the club. Dave picks himself off the floor after the Chelsea defeat and bounces back with a positivity that he expects the players to emulate. This was one Hell of a ride with more Highs than Lows but it is a story that will be remembered for a long, long time and mainly because it has been written about by a man who knows his subject-matter so well. When respected sportswriters like Chris Bascombe and Tony Barrett praise your work, you know that this is a book you have to read.