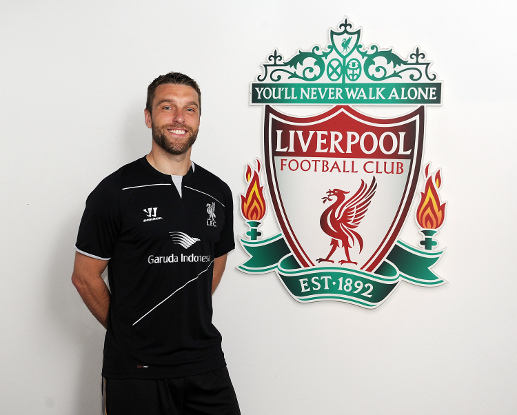 If Liverpool Football Club had made a move to sign Rickie Lambert five years ago, nobody would have shown the slightest surprise because the forward had already proved that he was something of a goal-scoring machine. Questions are being asked now because the striker is now in his thirty-third year but few doubt his ability to continue to score goals at that age. At the same age Kevin Phillips was still banging in goals for West Bromwich Albion and that prolific striker did not retire until after he had passed his fortieth birthday. Lambert is definitely from the same mould as Phillips.

The irony about this signing is that Liverpool had Lambert as a youngster but let him go when he was fifteen years old in 1997. In that respect comparisons can be drawn with another teenager Liverpool released, Ted MacDougall, who scored over two hundred and fifty Football League goals for other clubs after Liverpool let him go. MacDougall never got the chance to return to Liverpool except as a visiting player. But probably the three goals he scored against Liverpool gave him more satisfaction than most players would have felt. Lambert has also played and scored against Liverpool but now he has an opportunity to really prove his worth. Finally getting the chance to play for the club he supported as a child and represented as a youth will make putting pen to paper and signing a contract with Liverpool one of the highlights of Rickie’s playing career when he looks back on it in later years. Granted he isn’t going to be playing for as many seasons in the future, but age is no barrier if the quality is there.

A brief spell at Blackpool did not work out for the striker after he left Liverpool. When Blackpool manager and former Liverpool player Steve McMahon released him from his contract, he took time to decide what happened next before joining Macclesfield Town, who were still in the fourth tier of the English pyramid system following their promotion as Conference champions in 1997. He became a regular in his first full season with the Cheshire club, 2001/02, but there was nothing to really indicate that he would become the truly great goalscorer he evolved into. The forward left Macclesfield and moved the short distance to Stockport County, which gave him the chance to play in the division above the one he had just left. Although County finished comfortably in mid-table at the end of his first season with them, they only escaped relegation by two points in the next season and were relegated after finishing bottom of the table in 2004/05 a massive thirteen points below the second-from-bottom club. As his twenty-third birthday approached, it was time for the player to re-assess his options if he did not want to again be playing at the lowest level of the Football League. The day after that birthday he decided to stay in the north-west and move on to Rochdale, even though the Dale were playing in the same division that Stockport were about to drop into. At Stockport, as at Macclesfield, his goals-per-game figures were decent but nothing exceptional. His reputation, however, was growing and although Rickie only stayed at Rochdale for one full season it was a time when he really took off as a striker and came to the attention of bigger clubs. He played in all forty-six league matches in 2005/06 and scored twenty-two times.

Moving to Bristol Rovers in 2006 might not initially have been seen as a wise career-move. Few could argue successfully that Rovers was a significantly bigger club than Rochdale. Both clubs were playing in the bottom division of the English league system after all. But Rickie thrived immediately in a big-city environment and he would certainly have enjoyed returning to Spotland with his new club and scoring the only goal of the game. Lambert scored 8 times in the regular season as the Pirates finished in 6th position to qualify for the end-of-season play-offs. After a narrow 2-1 victory in the home leg of the semi-final against Lincoln City, Lambert scored one of Rovers’ five goals as they demolished the Imps 5-3 at Sincil Bank to qualify for the Wembley final. Although Lambert did not score in the final, Rovers won 3-1 at the national stadium to move into what was then called Football League One (just League One today). The north-west club the striker had left behind finished in 9th position, 5 points off the play-off places.

Lambert’s two full seasons in Bristol were very productive: 19 goals from 57 matches in 2007/08 followed by 29 from 48 a year later. Inevitably bigger clubs were looking carefully at a prolific striker who was now twenty-seven years old. After just a single league match for Rovers early in the 2009/10 season, Southampton made their move. Even though the Saints were in the same division as Rovers, Lambert immediately saw that they had more potential and agreed to make the move. His new club finished just outside the play-off places but Rickie scored 30 goals in 45 league matches; 35% of the team’s entire total for the season. Promotion was only a year away. Twenty-one more Lambert goals helped the Saints back into the second tier in second place behind their south coast neighbours Brighton & Hove Albion. Southampton reached the Promised Land of the Premier League in 2012 as Lambert scored 31 times in 48 competitive matches, including hat-tricks against Nottingham Forest, Brighton, Watford and Millwall. The Saints were back in the top division after an absence of seven years.

Nobody was surprised that a confident striker with years of experience behind him in the lower leagues adapted immediately to life in the Premier League. Lambert scored almost immediately after coming on as a substitute at Manchester City in the opening match of the season and added another 14 league goals in 2012/13 followed by 13 in 2013/14. He had now scored over a hundred league goals for Southampton in a fraction under 5 full seasons and had also reached a total of 200 league goals with the five different English clubs for whom he had hit the net.

Off the radar for international recognition while he was with lower-league clubs, things changed quickly for the Kirkby-born striker once he was playing regularly in the top division. At the age of thirty-one, when he possibly thought that the opportunity had passed him by, Lambert was called up to the full England squad for a Wembley friendly against Scotland. Wembley was not new to him. He had played (and scored) there when Southampton beat Carlisle United to win the Football League Trophy final in March, 2010. On that occasion he had played from the start. Against Scotland he had to sit on the bench until the 67th minute before replacing Wayne Rooney. The score at the time he came on was 2-2. Within three minutes he had soared to meet a corner from Leighton Baines and thunder a header past Allan McGregor. It was his first touch in international football! He was back at Wembley a month later to score against Moldova in a World Cup Qualifying match. This time he played from the start but was taken off after 70 minutes, by which time his team held a comfortable 4-0 lead. England won Group H by a point from Ukraine and Rickie Lee Lambert was unsurprisingly named as a member of Roy Hodgson’s 23-man squad for the World Cup finals in Brazil, joining fellow-striker and new club team-mate Daniel Sturridge as well as four other men he would soon be training with on a regular basis at club level … Glen Johnson, Steven Gerrard, Jordan Henderson and Raheem Sterling.

Has Liverpool taken a huge gamble by signing Rickie Lambert? Not with the fee, which is small by today’s standards; not by his past record because you can’t argue with a combined total of nearly two hundred and fifty-goals at club and international level; not from the man himself, who seems desperate to right the wrong that saw him leave the club’s youth system when he was only fifteen years old. The only criticism seems to be because of age. But if a goalkeeper can play up to and past his fortieth birthday, why shouldn’t an outfield player continue well into his thirties? Ian Rush scored 42 goals for Liverpool after his 32nd birthday; and Kevin Phillips scored 101 club goals after his. If you are good enough, age does not matter. This is a win-win situation … for the club and for the player.