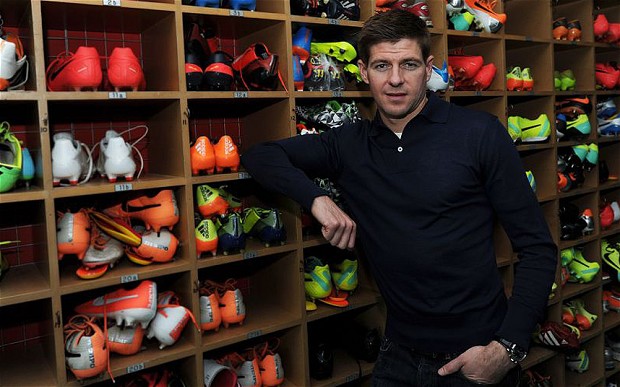 Exclusive interview As Liverpool captain Steven Gerrard closes in on a long overdue Premier League title, he reveals just how much it would mean to him and the club

A third of the way into this interview, and Steven Gerrard delivers the remark that might just define everything for Liverpool Football Club.
“You just hang on to that one small glimmer of hope that one day you can have one small chance, one final go before you hang your boots up,” Gerrard says. “And it’s here.”
It is here. Successfully negotiate the remaining four Premier League matches, starting with Sunday’s trip to Norwich City, and the title will return to Anfield after 24 years. It is that pared down; that simple. And yet history cannot be touched. Not yet.
It is a Thursday lunchtime at Melwood, Liverpool’s training ground: Gerrard’s place of work. Before you even enter the complex, you can hear his voice, barking instructions, issuing commands. On the street outside, supporters cluster on car roofs and stepladders to snatch a view of their talisman.
Once practice is over, Gerrard walks briskly straight from the pitch and into one of the small rooms set aside for media interviews. He is in business mode: his words are delivered with candour, determination etched on his face.

The first topic of conversation is obvious: how does he handle the emotions?
“To be honest, it’s the biggest thing on the agenda because I have got to manage them,” Gerrard says. “But they are there – the nerves, the excitement. They are there because we have earned the right to have those kinds of feelings. The challenge for me, which just as important as being on the pitch now, is can I control myself and can I get on with my life for the next four weeks. Can I control it.”
The words are actually delivered as a statement, not a question. Clearly Gerrard believes he can control it but even has been forced to recognise that life is less ordinary on Merseyside these days. As the realisation has hardened that Liverpool can win this title, Gerrard’s behaviour has changed.
After this interview he will get into his car, swing out of the gates at Melwood, now continually swamped by eager, expectant supporters, and head the 15 or so miles north to his home in Formby. There will be no backward glance, no reviews of his recent performances on video. “I go to work, work as hard as I can and get away from it,” Gerrard admits.
But what do people say to him on the streets of Liverpool?

We go again: Brendan Rodgers and Steven Gerrard are surprised by a banner at Melwood
“I don’t go around the city,” he adds, again cutting short the question. “From time to time, I will but I maybe only go into the city centre once a month. It’s because I’m not...I don’t know if 'comfortable’ is the right word, but I get more peace and privacy by staying away from it. I like to finish training and get to where I live in Formby as quickly as I can and relax and chill out and be with my girls [his wife Alex and his three daughters Lilly-Ella, Lexie and Lourdes]. That’s the release, to be away from it.
“That’s not because I don’t like going out in Liverpool. I’m really proud of where I come from and I love this city but I’m sure people will understand when they read this interview that it’s a bit difficult being in my position to jump out of my car and walk through Liverpool One (the city’s shopping centre).”
Normally Gerrard is a voracious devourer of the media. So did he read the comments from Zinedine Zidane last week that he deserved to win the title for “everything he has given” to football?
“You know, more often than not I would see stuff like that, I would keep up with the media and I do read a lot. But recently I have tried to switch off from it and as soon as I come out of Melwood I have tried to get football out of my system.”
I read him Zidane’s quotes in full, including the line that he and Paul Scholes are the two best midfielders of the past 20 years.
“Listen it’s very flattering. He’s my hero, and did things on a football pitch that blew me away. He was an absolute genius so when he gives you flattering comments then it’s nice. But you only get what you deserve when it happens. We deserve to be where we are. I do feel we have been the best team in the league but nothing is achieved yet.”
Nothing is achieved; yet that feels brutal, as something is evidently stirring at the club. Liverpool and Brendan Rodgers have spoken about reaching the top four and qualifying for the Champions League but the response of Gerrard, who deeply admires the manager, is revealing.
“The manager has never said that top four was only ever all we were after,” he states. “The manager has said the priority is to get into the top four but I’m confident that we are better than just being there.”
Not so long ago, Gerrard appeared resigned to never winning the title. In his book, My Liverpool Story, published in 2012, he stated: “It’ll be a miracle if I win the league with Liverpool but I’ll keep fighting.”
How does he feel about those words now? “There have been times when maybe I have given up on it – or been close to giving up on it. When you are finishing seventh or eighth and you see the gap to the top sides, it’s mentally tough. And then, come the end of the season you see the big hitters spending all kinds of money and making their squads even stronger...”
Gerrard’s voice tails away for a moment.
“But when Brendan came in I got a real feeling from him in our first conversation that I had. Not because we was telling me personally what he wanted from me but because I liked his vision for the club. I totally believe in this manager and his plans. I totally believe. I bought into that from the first conversation.
“He’s a phenomenal man for his age [41]. I think he’s going to grow into one of the world’s best managers and I hope he is here long after I am gone. I hope he is here for many, many years because this club is in great hands. Whatever happens now until the end of the season, it’s safe.
“He’s a winner, he’s hungry for success, he does the right things, he treats players well, he doesn’t try and control the football club, or get involved in stuff that has nothing to do with him. He just focuses on getting on the training pitch and coaching the team, improving individuals, improving the team and playing football the right way. That’s what the supporters want here.”
Gerrard knows that better than most. He knows because he has lived and breathed it throughout his life; he sees it in the supporters’ faces and his own. All of which brings us round to his extraordinarily raw reaction at the final whistle last Sunday as Liverpool defeated Manchester City 3-2 in the match of the season.
First came the roar of delight, then the tears, and finally the pep-talk, bellowed into the ears of his team-mates as they formed an impromptu huddle on the field and picked up by a lurking television camera.
“Listen, listen,” Gerrard yelled. “This is gone. We go to Norwich. Exactly the same. We go again.”

It felt like a defining moment – the kind which will soon be immortalised on T-shirts on sale on the Anfield Road – although Gerrard also knows it could end up meaning nothing if things do slip.
“No, I’ve not gone back over it,” he says. “I didn’t know it was going to be that big a subject until I got back into the dressing room and realised what I had done. I didn’t know the cameras were so close and, to be honest, I didn’t want them to pick up on what I said.
“It was off the cuff, it was emotional. But it had been an emotional week. The build-up of how big the game was, what it meant to myself and everyone connected to the club. It’s difficult to put into words how big it is and how big a position it [winning that game] has put us in. I think the huddle and also my interview on Sky was also a bit out of control.”
Emotions were stretched even more tightly as last week was the 25th anniversary of the Hillsborough disaster in which 96 Liverpool supporters lost their lives. The youngest victim was Gerrard’s cousin, Jon-Paul Gilhooley. He was just 10.
“It’s not just the service but also the weeks building up to the service and even more so, more than ever because of the events and how they have unfolded and where we are at the moment with the inquests,” Gerrard explains.
“It is covered around the world but having that personal connection to it as well ... it was just a very, very emotional week. The build-up, coming into training, trying to prepare for the biggest game of the season and also having Hillsborough there.”
The inquests have been reopened, in Warrington, and justice could finally be in sight. “I don’t know what the right word is,” Gerrard admits. “But there are signs. Improvement? Positivity? There have been certain breakthroughs and we feel we are moving forward. Saying that, listening to the main people speaking at the service there are a lot of hurdles to still get over. So we sit tight and we show our support.”
Gerrard will, occasionally, make a detour to drive past the Shankly Gates at Anfield and, next to them, the Liverpool memorial. “Every time I see Jon-Paul’s name cut into the cold marble outside the Shankly Gates, I fill with anger and sadness,” Gerrard wrote in the dedication to his 2007 autobiography. “I have never let anyone know this before but it’s true: I play for Jon-Paul.”

The one tinge of regret is not having Jamie Carragher, who retired last summer after 17 years at Liverpool, alongside him for these last four games: “If I could have it in a perfect way then he’d be in the dressing room with me helping me trying to achieve it.”
In Carragher’s absence, eyes will once again turn on Gerrard today. The world is watching, waiting.
“I think in the dressing room players are looking to me and how I behave. So it’s important that I stay calm and stay positive but they all know that I am there if they need me.
“That’s my job. If all the fans and the staff and the players are looking to me then good. I am ready for it.”

Brendan Rodgers
June 2012 – present
Apps 81 Goals 24
Trophies None
Highlight Being reinvented as deep-lying midfielder and a surprise title charge.
Lowlight None. By his own admission, Gerrard has never been happier.