The Official Treasures of Liverpool FC 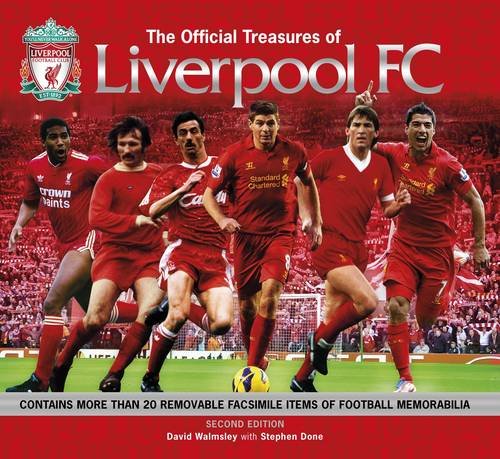 This is the updated version of a book originally published towards the end of 2004. That was the year in which Gérard Houllier’s reign as Liverpool manager came to an end and clearly there has been much to update in the ensuing nine years : four more managers, the club being sold twice and an extraordinary European triumph being just the bare bones onto which Messrs. Walmsley and Done have packed plenty of meat. David Walmsley is the author/journalist who has supported the club all his life and who got closer to it than most during his time as an employee of the Liverpool Echo newspaper; and Stephen Done, as curator of the club’s museum, has the enviable task of deciding which treasures go on display and which have to be stored elsewhere until it is their turn to go on show. It was Stephen who chose which items should go on display to supplement David’s text in this glossy hardback book. And he has chosen well because it really is fascinating to see amongst other items the contract Billy Liddell signed in 1939 and the certificate which officially confirmed the birth of Liverpool Football Club in 1892.

The club’s history is told in neat chapters to which have been added photographs of the time. The main individuals who created that history deservedly get their own sections. Yes, it is a story that has been already told many times by different people. Even the club’s early years have been heavily dissected since Treasures was first published. Peter Lupson’s Across the Park (2008), Kjell Hanssen’s Dicky Sams (2009) and Alan Wilson’s Team of all the Macs (2011) have already given supporters ample opportunity to re-live those early days. So even if David Walmsley’s original 2004 text has not been altered since that date, it is still a different opinion to be heard and that is always worthwhile, especially from someone as adroit a wordsmith as David clearly is. Although post-2004 has been written in the same easy-to-understand style, it is perhaps a pity that the pre-2004 text was not thoroughly checked again in case what happened in the new chapters changed the original version.  I came across only three factual errors (all from the pre-2004 period), an extraordinarily low number for a story that covers over a hundred and twenty years : Kevin Keegan did not score “in both ties” against Dynamo Berlin and Dynamo Dresden in the 1972-73 season; the F.A. semi-final with Arsenal in 1980 went to a third not second replay; and beating Manchester United in the League Cup final of 2003 did not “preserve their unbeaten record in Cardiff” because they had lost to Arsenal there in the Community Shield match the previous August. Plus although he is probably unlikely to read this book, I don’t think Alex Ferguson would be too pleased to read that Bob Paisley is “the most successful manager the English game has ever seen”. At the time of Paisley’s retirement (1983) he was but unfortunately he is no longer, apart from his unique European cup treble. In contrast, however, Roy Hodgson might be quite pleased to read and believe that Don Welsh “holds the dubious honour of being the only manager to be sacked by the club”.

In a way it is difficult to assess exactly who this book is aimed at. It is big and pricey. It isn’t the sort of thing that would fit easily into most bags never mind a pocket! Maybe in time it will become some sort of “collector’s item”. A copy of the 2004 version is currently on offer at over seven hundred pounds! What is beyond doubt though is the time and effort that has gone into it. In terms of the overall story, there isn’t really anything that has not been told before. Perhaps the main target market is younger supporters keen to learn more about the club’s whole life rather than long-standing supporters who have read and heard most or all of it before ? But it deserves to do well because of all the hard work involved. And the reproduction of so many documents … the ‘treasures’ referred to in the book’s title … certainly bring a different aspect to most previous books about the club that cover the same period/s.