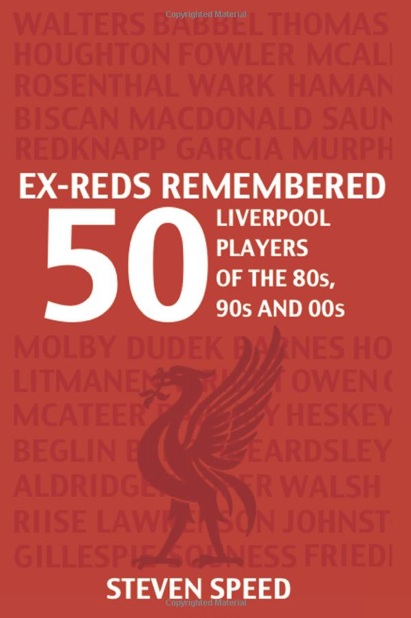 By Steven Speed
Published by This Is Anfield (2013)

If you picked a dozen supporters at random coming out of Anfield after watching a Liverpool home match and asked them to name their greatest-ever fifty players to have represented the club, there is a better than even chance that a lot of them would go back no further than 1992, the year that Sky attempted to reinvent the game of football. Some might be able to go back into the three decades that started with the “Swinging Sixties” and include men who played in those thirty years. But even fewer would be able to go back to the Second World War and beyond, even though the deeds of the likes of Elisha Scott, Ephraim Longworth and Alex Raisbeck to name just three old-timers are becoming more well-known thanks to the plethora of sources now available to a football club’s fan-base.

In making his own choices Steven Speed has deliberately restricted himself only to men he has a personal memory of. Born and brought up on Merseyside before moving via New Zealand to Canada in 2005, the author has a large memory-bank to draw on as he witnessed at close quarters some of the most iconic matches Liverpool Football Club has ever been involved in and some of the most eminent men who have ever represented that club. After arriving in Canada, Steven became heavily involved with the Supporters’ Club in Vancouver (LFC Vancouver) and has been their president for the last five years. Steven and a friend, Keith, started writing articles about past players for LFC Vancouver’s newsletter … but this was eventually a task that Steven continued on his own, until he realised that there were enough articles for a book about the players they had been writing about to be the next logical step. With a British degree in both English Language and Literature behind him, he was clearly qualified to be the man behind the book himself.

Mister Speed omitted a number of major club legends (Carragher, Dalglish, Rush and Thompson for example) when making his final selection, believing that “there are enough articles and books written about the really big names and I am not sure I can really add to what is already out there.” That’s a fair enough comment but I think he might still have had difficulty whittling down his  names to a nice round fifty, especially when thinking about the first decade covered in his book because Liverpool teams had so much success in the 1980s.

Of the fifty men selected who represented this one English club in the Eighties, Nineties and Noughties, it is interesting to note that just eighteen are English with the nationality of two of those, Mark Lawrenson & John Aldridge, being open to question because they represented the Republic of Ireland at international level despite being born on the mainland. Eighteen of the fifty are neither British nor Irish including eleven of the seventeen selected for the final decade, a figure which reflects the number of players who became free to move from country to country because of the expansion of the European Union member states. Intriguingly, two managers are included. Roy Evans certainly isn’t in as a player because he only made eleven first-team appearances for Liverpool between 1970 and 1973, long before the criteria for qualifying for this book. But he was a trophy-winning manager (1995) as was Gérard Houllier (2001 & 2003) and for that reason alone they deserve their place in this top fifty.

There is little doubt that this book has been well-researched as well as well-written. I am, however, quite fussy about historical inaccuracies in football books because it is proof that however meticulous the research has been, the facts have not been checked thoroughly enough. I found several factual errors that a lot of readers might miss but because Steven Speed lived through the times he is writing about, I feel that he should have picked up on some of what follows and what follows is only taken from the first section of the book about the Nineteen-Eighties : John Aldridge was not the first man to miss a penalty in an F.A. cup final  (that dubious honour had fallen to Aston Villa’s Charlie Wallace seventy-five years earlier); Graeme Souness did not come on as a substitute in the 1982 League cup final (he started and played the entire 120 minutes) and his team was never two goals behind in this match; Jan Mølby missed three penalties for Liverpool not two; John Barnes did not score a penalty in the replayed F.A. cup semi-final of 1989; and Gary Gillespie did not score the goal against Derby County that clinched the 1990 League championship (the title had been sealed in the previous match against Queens Park Rangers three days earlier).

A large percentage of the author’s Top Fifty have had biographies written about their careers or penned their own autobiographies. Steven Speed’s portraits of these men compress each career into a few pages instead of several different chapters. He does that well and what I liked particularly was the information about each player’s career both before and after they were employees of Liverpool Football Club. I also liked the many anecdotes about certain players that helped to create a guide to their character or temperament. It is a good book, perhaps even a good reference book avoiding the need to look at other sources for information. I was a bit disappointed that there were no photographs to support the text. But I was more disappointed at the factual errors, most of which were avoidable and could have been eradicated with more meticulous research.

Click here to buy this book from Amazon (Kindle version)