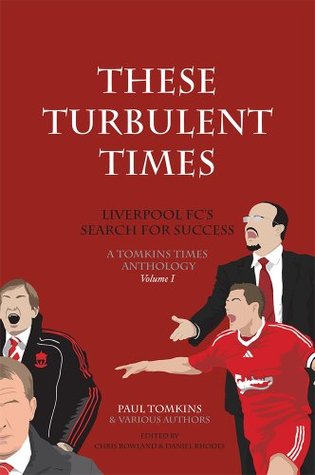 
Paul Tomkins, a respected and well-known writer in Liverpool F.C. circles, began writing for the club’s official website in 2005.  This led to the birth four years later of The Tomkins Times, a subscription-based online forum or sounding-board for discussing and dissecting the club’s business on and off the field which has continued to grow and flourish. Through the whole of this period Paul has put his name to a number of football books of interest to Liverpool’s legions of supporters throughout the world, perhaps most notably “Above Us Only Sky” (2007) and “Dynasty: Fifty Years of Shankly's Liverpool” (2008).

The title of this latest book is appropriate. The times about which Paul Tomkins and others write were indeed turbulent and maybe still are. Incoming owner John William Henry realised that only too well when he declared that “this club should never again run up debts that threaten its existence”. I think it is important to stress “Tomkins and others” as the authors because this isn’t a one-man show by any means. Paul has collected around him a group of equally-accomplished writers and so “These Turbulent Times” consists of a series of articles written over the past four years by several individuals, all of whom share an interest in and/or passion for Liverpool Football Club but who also have quite different skills and methods of disseminating their opinions.

Perhaps the multi-authorship of this book is both a strength and a weakness ?  When you get used to one person’s style of writing, it can be tricky to switch without a break to someone else’s style a few pages later especially if the next person’s forte turns out to be a myriad of facts and figures, graphs and charts that are far from easy on the eye. Yes, it is easy to praise the meticulous research that has led to the construction of graphs about, for example, FFPR (Financial Fair Play Rules) or Transfer Price Index Predictions. But readers used to what I might call ‘basic prose’ are likely to find the statistic-related articles pretty hard going.

Perhaps struggling through those chapters made me enjoy and look forward to the ‘basic prose’ more, something Paul Tomkins himself is most proficient at … the sort of articles which endeared him to visitors to the club’s website for a long time and which helped to make his name so prominent in football circles. Nowhere is that more obvious than in a quite wonderful article originally written in 2012 called Rushian Roulette, a stirring account of the life and times of one Ian Rush. But there is some heavy stuff mixed up with the deeds of certain iconic players like Ian Rush and John Barnes. Hillsborough survivor Chris Rowland writes beautifully and emotively in “We Were The Victims; It Wasn’t Our Fault”; and on the same theme Neil Dunkin’s “A Doctor At Hillsborough” reveals that the doctor in question, a Glyn Phillips from Scotland, could finally confidently say despite numerous setbacks in trying to get at the truth : “I believe that Lord Taylor did a great job in deciding what was the root cause of the disaster”.

So this is very much a mixed bag of different topics and in that respect it probably has something for everyone … the statistician, the mathematician, the analyst, the businessman, the financier and the man in the street. Few will find every single chapter/article to their taste and some chapters will definitely need more brain cells to decipher than others. Paul Tomkins was privileged to have his finger on the pulse of Liverpool Football Club during a most difficult period in the club’s existence. It was a pulse that nearly stopped completely and this diverse collection of articles neatly recalls the ‘medicine’ that was required to keep that heart beating because … from Martin McLaughlin’s chapter “Football, Finance, Liverpool and the Top Six” that “£80m wasted on sacking managers and a phantom stadium” was indeed “the mess which F.S.G. found the club in when they arrived”. From this book we can be reassured that the mess is slowly being sorted out. Maybe soon these turbulent times will just be a nasty memory of the big, black hole into which the club nearly disappeared.

Click here to buy this book from Amazon (Kindle version)