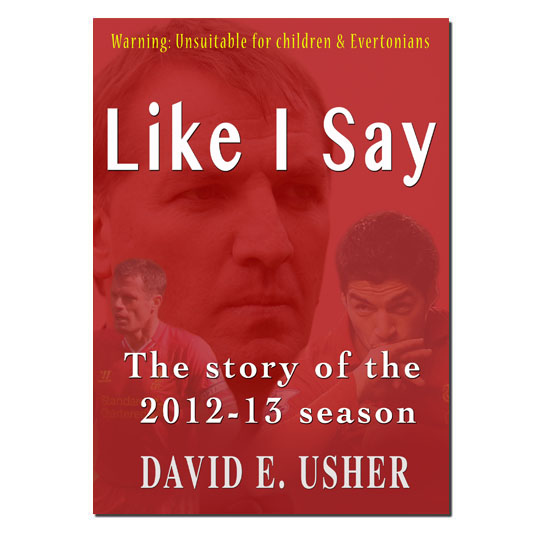 By David E. Usher
Published by the MPG Books Group
Artists usually try to follow up initial success with something similar or something better. Sometimes it works and sometimes it does not. If I restrict myself to Liverpudlian artists only, Gerry and the Pacemakers’ “I Like It” was even more successful than “How Do You Do It”; similarly, two decades later “Two Tribes” gave Frankie Goes to Hollywood as much success as “Relax” had done, although not the same notoriety as their first single, which had been banned  by the BBC.

Writers too face the same pressure to follow up one successful book with another. The task is made easier if, however good you are at stringing sentences together, you already have a captive audience. David Usher certainly has that, an army of admirers who have chuckled their way through his diary in “The Liverpool Way” fanzine for many years and who know that he will always write with honesty and knowledge about the football club that has dominated his life. The modern expression wysiwyg (what you see is what you get) applies to Dave perfectly; and new recruits to this clever wordsmith’s army will be just as thrilled with “Like I Say” as any of his committed and regular readers.

“Like I Say” continues neatly on from “The King’s Last Stand” as a manager idolised by the club’s fan-base is dispensed with by the American owners and replaced by a much younger man with a lot to prove but who seems to embrace the ethos of the club’s history and traditions much quicker than the man appointed by the previous American owners in 2010 … and it could be argued that that first man did not embrace them at all. The name of the manager apart, the two books are written in a very similar style. In monthly chapters Dave dissects every one of Liverpool’s fifty-four competitive matches during the 2012-13 season and then comments almost as comprehensively on all the other Premier League fixtures as the season progresses. The coverage of these non-Liverpool matches again shows his absolute commitment to his project as he sits through hours and hours of football highlights, many of which would obviate the need for anyone to ever take any medication to get them to sleep.

As you might expect, there are heroes and villains throughout this narrative. The author’s venom towards anything connected with Stoke City has not been diluted by a summer break between seasons so Messrs. Pulis and Walters, for instance, come in for some seriously vitriolic blows. But Tony Pulis need not feel that he has been deliberately picked out of a bunch. Plenty of other Premier League bosses can feel the tip of Mister Usher’s verbal sword  grazing their skin … and often going deep inside it … with Newcastle’s Alan Pardew being the victim of Dave’s incredulity that a modern-day club could justify handing out an eight-year contract, especially a club that seems to change its manager as frequently as this one does. In 2011-12 Junior Hoilett was the favourite player away from Anfield to whom Dave devoted a lot of text, even though that season ended in the disappointment of relegation for both the player (then at Blackburn Rovers) and his manager (Steve Kean), another man who received much positive attention during that season with Dave eventually having to admit that his genial attitude to both was probably misguided because Rovers went down, although Hoilett did retain Premier League status by moving to Queens Park Rangers in the summer of 2012 whereas poor Steve was “forced to resign” (his words) at the end of September, declaring that his position at Ewood Park had become ‘untenable’. Hoilett is replaced in Dave’s affection by Southampton’s Jason Puncheon and this time the story has a happier ending as The Saints narrowly avoid falling into the abyss that Blackburn were unable to avoid.

Dave says exactly what he feels … and he clearly feels what a lot of us are feeling as well. The difference is that he is not afraid to say what he feels and he doesn’t particularly care who he upsets or offends because it is after all only one man’s opinion, even if those opinions often comfortably seem to cross the line that separates heavy criticism from the risk of a libel action being taken against him. But this is a several-chuckles-a-page book and you will have to put it down many times as you read something that you wish you had had the cojones to write or say yourself. A manager’s exit from a club (Yes, I’m looking at you Mister Ferguson and you Mister Pulis) does not mean that you escape David Usher’s wrath. Actually, your retirement or, in the case of Pulis, dismissal makes you an even sharper target than before.

For the second season running, the author has to analyse in detail another incident involving Luis Suarez that brought shame to both the player and his club. But there is no attempt to hide behind the facts; Dave knows, as all Liverpool supporters know, that what Suarez did was “indefensible”.

So Dave has done what Gerry Marsden and Holly Johnson did … followed one big hit with another. I don’t know if he has plans to continue the sequence in a year’s time. But I hope he does. And I hope that the next time he writes about a year in the life of Liverpool Football Club, he will have tangible success to report back on not just the promise of success.

A Kindle edition of this excellently-written, thought-provoking and often hilarious book can be ordered from Amazon.