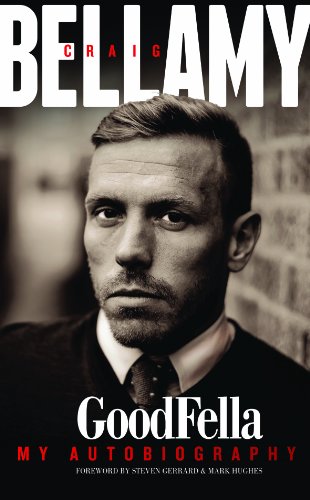 Written in conjunction with Oliver Holt
Published by Trinity Mirror Sport Media
Sport will always have its heroes; and it will also always have its villains. Often the dividing-line between the two is only about public perception, about one individual who is idolised and another who is vilified. In the sport of football there have always been men the crowd loves to hate … an Eric Cantona, a David Batty, a Joey Barton; men who are usually lauded by the supporters of the club they play for yet disparaged by everyone else’s supporters. Possibly Craig Bellamy falls into the same category. But is it really fair to judge a man purely by what you have read or heard about him ? No, it is clearly not right to do that. Because the man has a right of reply. He has the right to give his own side of the story. He has the right to prove that the public’s perception was wrong.

Craig Bellamy has had more clubs than most and that is not including the number eight iron he once used to attract John Arne Riise’s attention!  Of the eight different clubs in the English Premier League or Football League that he has played for, only at Norwich City, Newcastle United and West Ham United did his stay last two seasons or more. However, having helped his hometown club rise into the top division of the English league system for the first time in fifty-one years, it is unthinkable that he will not have one final swan song in the Premier League. Achieving promotion with Cardiff City was one of his proudest moments : “I always wanted to be a hero here more than anywhere else”.

At Coventry City, Blackburn Rovers and Liverpool (twice) Bellamy moved on after just twelve months. If outsiders thought this was because he was a disruptive influence and had fallen out with a club’s hierarchy, that is far from the truth. Each time he moved on … and this includes the two loan-spells with Glasgow Celtic and Cardiff City … there were good reasons for him doing so, reasons that were nothing to do with his footballing ability because most of the managers that he played for recognised that he had a remarkable talent. “I have always been restless” partly explains his wanderlust but it isn’t the whole story. High-profile sportsman and women are “wired differently” and it was quite early in his career that his talent meant that he had moved up into that category.


Yet it wasn’t a smooth start. Leaving Cardiff and moving to Norwich on the other side of the island at the tender age of fifteen must have been incredibly difficult emotionally, akin to being sent away to boarding-school possibly with all the homesickness that comes with it. He acknowledges that “the first year of my apprenticeship at Norwich was the hardest year of my life” but that during it he learned to be “emotionally detached”. Away from the familiar sights and sounds of his upbringing he had to grow up quickly, so quickly that he became a father before he had even made his first-team debut for Norwich City. The player acknowledges that he was educated well in the game at Norwich and that they shaped his blossoming professional career.

During his one year at Coventry, the astute and tactically-aware Gordon Strachan encouraged the twenty-one-year old to “run past players, not with them” because the manager recognised that Bellamy’s biggest asset at that age was his pace. Relegation from the top division forced the player to look for a more suitable home for his talents and he found that at Newcastle where he was hugely impressed by Bobby Robson’s philosophy about how the game should be played : “All our training was about how we were going to win, not how we were going to avoid defeat”. He knows how fortunate he was to play under Robson, partly because his boss made him feel “invincible”.

Through all his moves, there is one constant and one constant fear … a bad injury and the concern that it will recur or that a different injury will happen. The position he played in and particularly the searing pace that he had in his early-to-mid twenties meant that he was always going to suffer more than most in a contact sport : “Injury is every footballer’s secret struggle and the fight is made harder because it is conducted away from the limelight”, Even when on loan at Cardiff from Manchester City in the twilight of his playing-career, the injuries did not relent. But he coped, as he always had with injury, by “locking himself into his own world” but always with the focus that however tough the rehabilitation was, he would find a way through it. “People simply don’t understand how an injury can take over a player’s life and dominate everything” is a statement that reflects how hard it can be to recover time and time again.

Having followed Liverpool FC’s fortunes as a boy growing up, he knew that the prospect of playing for them would be “hard to resist if they maintained their interest”, which they did in 2006. But despite his love for the club, one year under the Rafa Benitez regime was enough. He could not “take another year of continual uncertainty about whether I would be playing or not”. Returning to Liverpool with Kenny Dalglish now in charge gave him a much happier experience. It was too good an opportunity to turn down, partly because he felt he had unfinished business to attend to : “One way or another, I knew I’d be back”.

Away from football, two aspects of this complex character’s life stand out … his absolute devotion to his children and the aftermath of his visit to the African country of Sierra Leone during the close-season of 2007. Even though “The poverty I saw made a huge impact on me”, he also felt “inspired and energised by what I saw”. His determination to follow this through on his return to Britain led to the setting up in his name of a Foundation Academy for disadvantaged children, a project which is now flourishing and which will keep him occupied long after his playing days are over.

Maybe Craig Bellamy’s acerbic attitude made him a few enemies on the pitch or even away from it. Even Steven Gerrard in writing a foreword to this excellent book admits that by reputation alone he was expecting “a bit of a hothead” when this new arrival turned up at Liverpool in the summer of 2006. It was a judgement that was quickly dispelled by the new recruit’s quick integration into the group but particularly by how hard he worked in the gym. But within his own world this proud Welshman definitely made more friends than enemies, none more so than the much-missed Gary Speed, whose early death at the age of forty-two had a massive impact on his fellow countryman, an impact that left him needing and unashamedly accepting professional help to deal with this loss, help so effective that his “people skills have improved beyond all recognition” even though Gary’s untimely passing also forced him to take a long hard look at himself.

I finish as I started with the heroes and villains analogy. Indubitably, experienced and respected journalist Oliver Holt has got into the heart and soul of Craig Douglas Bellamy and proved that far from being a villain this particular professional footballer is in fact very much a goodfella.

Click here to buy this fantastic book from Amazon.