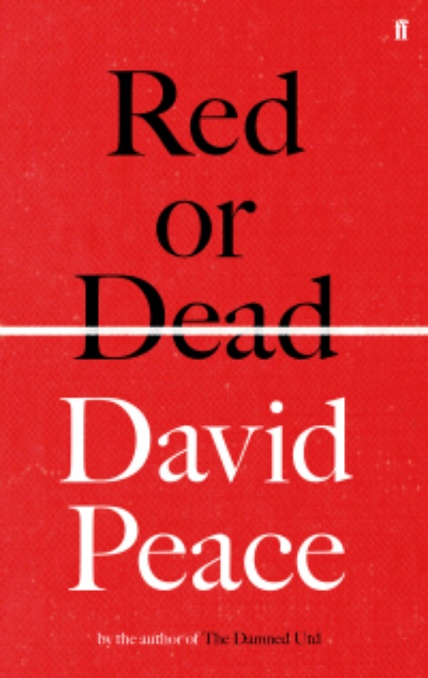 Published by Faber and Faber

David Peace is an experienced writer, best known in football circles for his 2006 offering “The Damned United”, later turned into a film, the stormy account of Leeds United in the aftermath of Don Revie’s departure to leave the English champions and take the England job and the controversial arrival of the outspoken Brian Clough to replace him. Praised for writing what was described by someone at The Times newspaper as “probably the best novel ever written about sport”, Mister Peace will certainly receive similar acclaim for “Red or Dead”, the story of Bill Shankly’s intervention to turn the sleeping giant of Liverpool Football Club into a respected European power; and also the story of how and why Mister Shankly left the club in 1974 and how he coped with retirement.


It was inevitable that the centenary of Bill Shankly’s birth would attract a lot of interest. If you achieve as much as this man did while mortal, you can’t expect an anniversary like this to pass by without your deeds being remembered. Even though it is now over thirty years since Shankly died, books and articles continue to be written and published about what he achieved when he was alive and the legacy he left behind when he died. Shankly stories continue to be told and retold with relish, almost to the point where the listener or reader isn’t really sure what is true and what apocryphal.

It is really important to emphasise that “Red or Dead” is a novel not a biography. Yes, the facts have been researched with astonishing attention to detail. But the ‘novel’ tag means that the author has licence to give his own interpretation, not to the facts themselves but what lay behind them. Sure, there are plenty of former players around who can recall what life was like under Shankly’s managership. There is plenty of that sort of proof where facts and incidents can still be verified and authenticated. An old player can still recall what he said to his manager and what his manager said back. It is different for private conversations between people who are no longer here … Bill Shankly to Matt Busby for example, Shankly to Don Revie, Shankly to the Liverpool Board of Directors, Shankly to other managers or players, Shankly to the eminent Liverpool journalist Horace Yates, even Shankly to his wife Ness. Nobody can verify those conversations but David Peace isn’t asking you to do that anyway. If you find yourself querying “Is that really what was said, is that really what happened ?” or is it more “Is this what they would like us to believe was said or happened ?”, the answer is very simple. Just open your mind and believe it to be true. Did Bill Shankly really drive over to Manchester to seek Matt Busby’s advice about whether or not he should walk away from Anfield because of difficulties he was having with the Liverpool Board ? Who knows if it is true or not ? And, frankly, who cares if it is true or not ? Novels are about believing in what you are reading. When Shankly asks for the money (£18,000) to buy unknown goalkeeper Ray Clemence from Scunthorpe United in 1967 and Director Sid Reakes immediately comes back with “Ray who ?”, believe it happened this way because it is just as likely that it did as that it did not.

Some facts are indisputable anyway. In his own autobiography, first published in 1976, Shankly himself recalls the sadness he felt that his departure in 1974 became somewhat awkward for the Liverpool F.C. hierarchy to deal with; the length of time it took for him to be officially invited by the club to travel with them to an important match (the away leg of the 1976 UEFA cup final in Bruges); that he was accommodated in a different hotel to the one the club’s players and officials were using and that he found this “quite insulting”. You don’t have to question events like this because we already know they happened just the way they were previously recorded as happening.

If football is a game of two halves then so is this book, neatly and logically divided by a line that bears the year nineteen seventy-four, the year after Shankly’s second great team, still incorporating some of the members of his first, again fulfilled the pledge the manager had made in the previous decade to local newspaper correspondent Horace Yates that “I will never be truly content until we are the undisputed champions of this land”.

The story behind Liverpool Football Club’s struggle, at times a desperate struggle, to return to the First Division it had left in 1954, is well-known; the arrival of a new manager in 1959 to galvanise the lethargy into which the club was floundering into a concerted effort where everyone was pulling in the same direction instead of against each other, is also well-known; the success that was almost inevitable once all aspects of the club were being run in a completely different way; the trophies that were accumulated as Shankly’s carefully-prepared plans to build his “bastion of invincibility” bore fruit; the love that grew between the team and those who watched it, the admission from the manager that “what attracted me to Liverpool Football Club was the level of its support”. It’s all here … and more. It is a massive book. But it is massively important too. For anyone who lived through the time it recalls, it will fill them with joyous nostalgia for a bygone age. For those who came after it, it will fill them with an uneasy realisation that they were born a generation too late. Because this is the wonderful story of a man whose life was changed by a decision he made in nineteen fifty-nine, a decision that changed the lives of those he was in daily contact with, a decision that changed the lives of thousands, tens of thousands, that he never knew.  Yes, this man’s story has been told before … but never in this way. On Tuesday the 29th of April nineteen seventy-five, at the end of a nostalgic evening at Anfield on which the club had granted their former manager a testimonial match, thousands stayed behind on the Kop to chant with real emotion in their voices “You’ll always be our King”. This is the story of that man. This is the story of that King. And, as you read, it will fill your heart with joy and also with respect and admiration for what this man achieved; and it really will make you understand why he was so admired and why he was so loved. This man’s legacy did indeed “reverberate through the ages”.

Click here to buy this fantastic book from Amazon