The Liverpool Echo reports on the Kop's treatment of Manchester United's Scottish legend, Denis Law, in April 1964 as Liverpool were on their way to their first League title in 17 years.

Liverpool, the wondrous wackers, are the greatest team in Britain. The players are pretty formidable. But the team that enthralled and impressed me as Manchester United were beaten 3-0 was that awesome choir of thousands who assemble to send terrifying noise thundering down from the height of Spion Kop.

These wackers wrecked Manchester United. They destroyed Denis Law.
I almost felt sorry for the swaggering, flamboyant man Law as I witnessed his pitiless, public deflation.
As Manchester United fumbled into slow decline Law desperately sought to impress his own personality on the game.

The choir, as though mystically sounded off by some invisible baton, chorused: “Eee, Aye, Addio, Denis Law’s a twerp,” or words to the same devastating effect. You could see Law wince.

And as Law languished the international outlook for next Saturday shone jewel-bright as England’s Roger Hunt and Gordon Milne richly contributed to Liverpool’s victory.

The fans are conscious that they are a show in themselves. 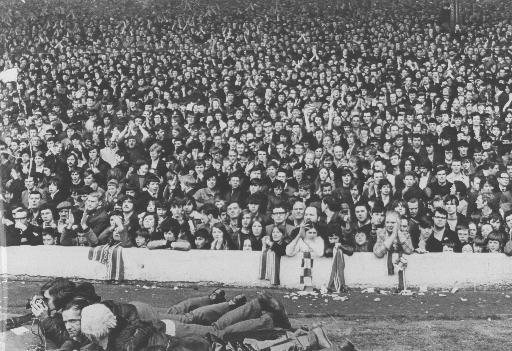 No stage producer could get the effect of thousands of fans swaying in opposite directions to the oddly chosen anthem of “You’ll never walk alone.”
It is memorable and moving, and abruptly the mood changes as the fans switch to the “Eee, Eye, Addio” routine and some unfortunate player or referee suffer the ordeal by sound.

The team are worthy of their audience. Listen to their ebullient manager Bill Shankly, whose assessment of his team makes Cassius Clay look a modest, retiring chap.
“They’re lion,” roars Shankly. “Yes, sir, they are lions that go out hungry. Nothing will stop them. They’re the greatest.”

Matter of fact they are. They are well fitted to go out and do battle in Europe. If the Continentals survive the fans, they will be wrecked by the irresistible Merseyside tunnel system. 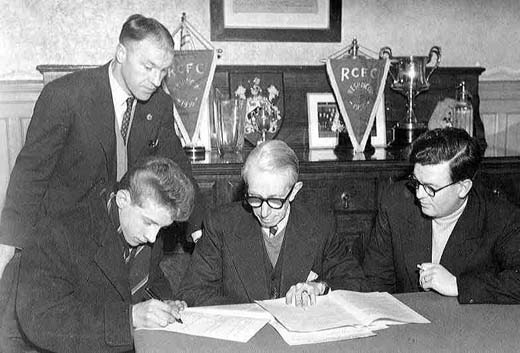 “Denis Law could dance on eggshells,” Shankly said of his compatriot who is here signing for Shankly's Huddersfield. Shanky wanted Law also at Liverpool but Liverpool's Board felt he was out of the club's price range.

Ask Manchester United. Liverpool were on them in the first minutes. Goalkeeper Harry Gregg was so alarmed he fumbled the ball and local wacker Ian Callaghan scored.

Again the tunnel system burrowed through, and Alf Arrowsmith scored. The speeding Arrowsmith did it again in the second half and, sitting on the ground, bounced up and down in his delight.

And as the game blasted out to its close the Kop choir were in the full voice chanting out “Liv-er-pool, won the League.”
Looks as if they have.

And it could not happen to a better team or a livelier, more mischievous assembly of enthusiasts.

A year later a song “Eee, Aye, Addio” was the most selling single on Merseyside.