The funeral of Tom Watson

A cool corner of Anfield Cemetery had been chosen. The sun’s rays shaded his last restingplace. “Tom” was buried there. The day was beauteously fine, and the setting of the last act was all peaceful. The whole sportsworld seemed to be represented. The late manager of the Liverpool Football Club had no enemies and the far-stretching reach of his works – charity being placed No. 1 – was in a measure shown by the representative gathering which attended to pay its last tribute to an ensteemed man. The body was borne to its resting-place by old and famed players of the club: Raisbeck, Maurice Parry (in his regimentals), Charles Wilson, Goddard, Ted Doig, Bobbie Robinson, and Trainers Fleming and Connell. The following players of the past season were present: - J. Hewitt, T. Fairfoul, K. Campbell, A. Metcalf, D. McKinlay, J. Parkinson, J. Sheldon, R. Terriss, J. Scott, H. Lowe, E. Longworth, E. Scott, P. Bratley, M. McQueen, W. Connell, G. Patterson, and R. Riley.

From far and near came the football club representatives. A bossum chum in Mr. John J. Bentley was much affected by his friend’s passing hence, and others I noticed were Mr. R. Kyle, of Sunderland, Mr. Frank Watt, of Newcastle, Mr. Oliver (Newcastle’s chairman and relative to the deceased), Villa’s chairman and secretary, and representatives of Wolverhampton, Stockport, Blackpool, Barnsley, Grimsby, Manchester United and City, and Bolton clubs. Scottish clubs, where Tom was so well-known sent their “bearers,” and I noticed Willie Maley present, also Mr. A.J. Dickinson, of the League Management Committee and Wednesday F.C. 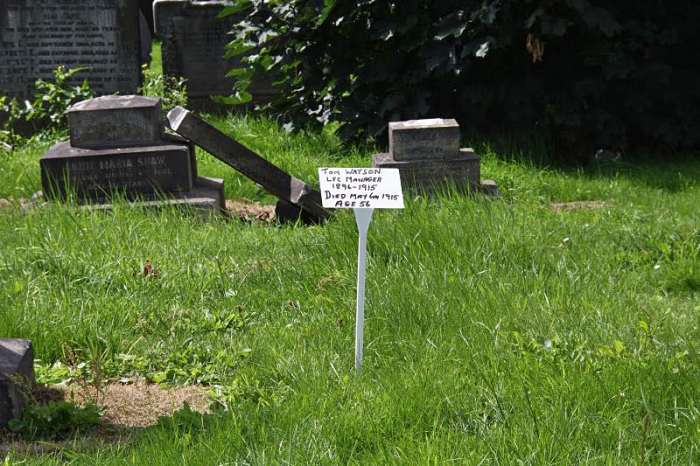 The number of wreaths, including tributes from the Liverpool and Everton clubs, was more than one hundred, and represented all the leading football associations.