Liverpool played in their first-ever FA Cup final in 1914 and the game was witnessed by over 72,000 spectators. Unbeknownst to most there was a unique man among the crowd. Daily Express reports: 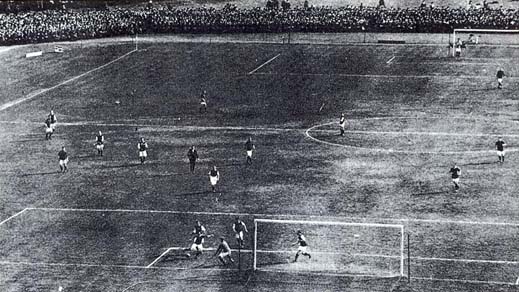 One of the most interesting figures at the Cup Final at the Crystal Palace on Saturday afternoon was Mr. W. Meredith, a blind man from birth, who was brought from Manchester in connection with the National Institute for the Blind to place on record his impressions of the game.

For twenty-five years Mr. Meredith has been a familiar figure at football grounds in the north, and has mastered the details of the game thoroughly. At the Crystal Palace, relying chiefly on sounds, he followed the ramification of the play with an amazing confidence, and was frequently able, in the most disconcerting fashion, to name the player in possession of the ball and describe what he was going to do with it.

Some of Mr. Meredith’s impressions after the match are given below: -
“I liked Liverpool’s outside right, Sheldon, very much,” he said. “He is a great forward. But I think he spoils many a good effort by holding the ball too long, instead of sending it to the centre. I was not favourably impressed by the play of Miller, Liverpool’s centre, as in many instances he was very slow. I have known Miller at his best, and he was a long way short of it to-day.

“Of the half-backs, I liked Fairfoul best. Ferguson and McKinlay, although working so persistently, did not come up to my expectation. Pursell performed well at left back, but Longworth was my favourite; he kicked and tackled like a Trojan, and saved his goal time after time when it was in great danger.

Kenneth Campbell is a great goalkeeper. The ball had only just been kicked-off when Mosserop, receiving from the half-backs, ran along the wing, centred accurately, and some one, whether Freeman or Lindley I know not, shot in. Where Campbell came from I am at a loss to know, but he saved miraculously. “Perhaps one other instance of his excellent goalkeeping will surface. Once in the second half the Burnley forwards were in line in full cry for goal. A hot bombardment took place, and three shots were directed at goal. Campbell was equal to the occasion, and saved wonderfully in each case.

“The Burnley side struck me as a very robust one; they played vigerous football, and swung the ball about in fine fashion.

“Taking everything into consideration, I cannot say it was a great game. I may hear some one say the best team won, but had a draw been the result should not have been surprised, as I consider the play veered pretty evenly.”

Mr. Meredith’s accuracy in following the game is explained by his keen sense of sound. He can tell by the interval of time between the sound of a kick and the sound of it bouncing how far and in what direction it has gone.