The Didi Man: My Love Affair with Liverpool 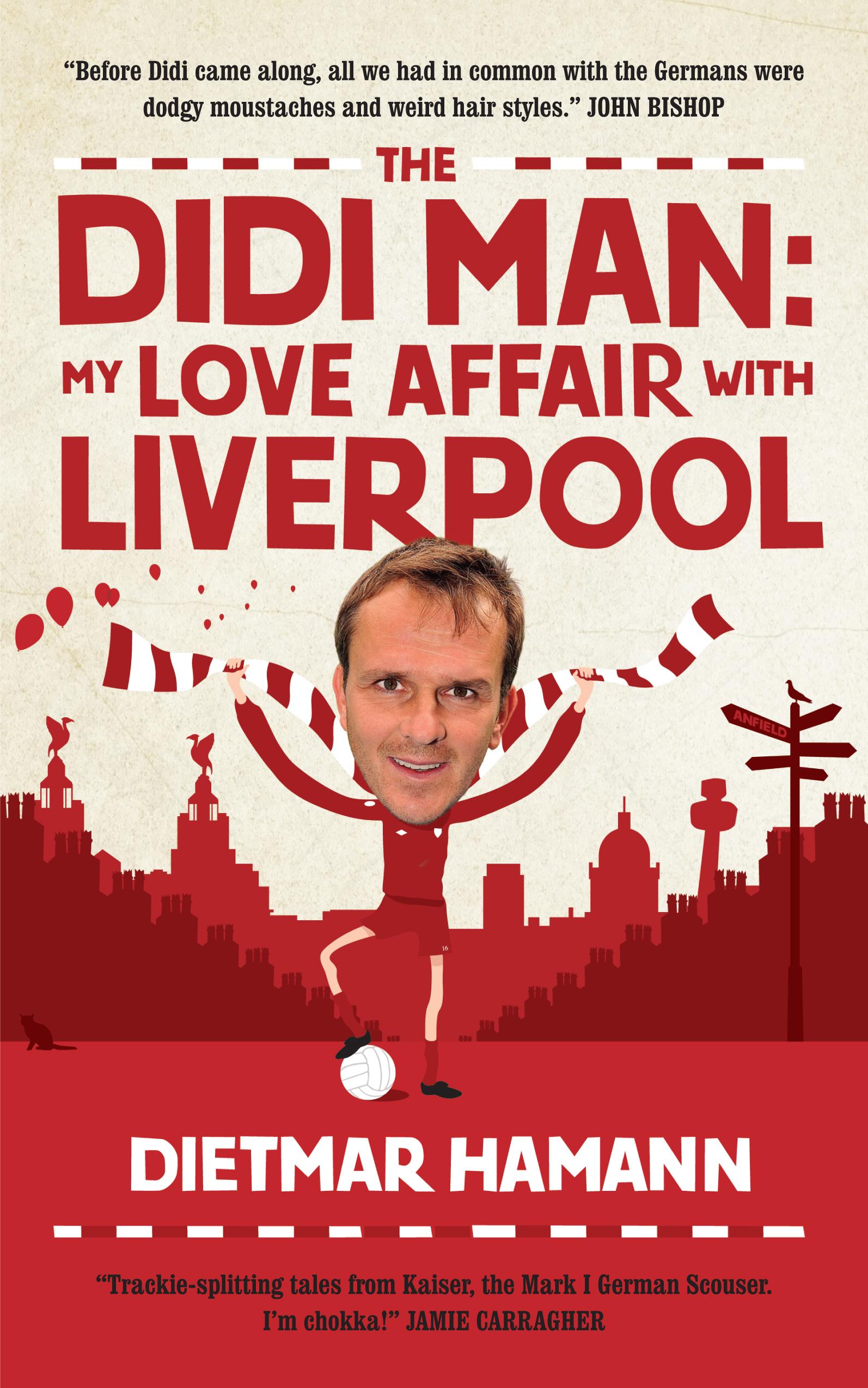 Dietmar Hamann is one of the most decorated footballers of his generation and he was already a multi-medal winner by the time he arrived in England to join Newcastle United shortly after the 1998 World Cup in France. The German saw the man who had signed him (Kenny Dalglish) lose his job only two matches into a new season and had to immediately get used to life under a new boss (Ruud Gullitt) but coped well with this sudden and unexpected change. This is one of the things that is a constant theme throughout this book … Hamann’s ability to adapt to changed circumstances in his professional and personal life. Not a guy who makes too many impulsive decisions, he comes across as a thoughtful man who knows what he wants to do and just gets on with it responsibly and efficiently.

Although we get an excellent insight into the whole of his professional career to date, the very title of the book inevitably means that the major focus is on his seven years as an employee of Liverpool Football Club; and what a seven years it was, a period when the club emerged from a long slumber to reclaim its spot at the pinnacle of European club football, a triumph that Didi Hamann was at the heart of as he became one of the most popular non-British players ever to represent the club. His contribution perhaps wasn’t as widely recognised as much as it might have been at the time but sometimes you only really appreciate what someone has done when they are no longer there to do it. If that is true, then Dietmar falls neatly into that category because when you look back on his time at this football club, it is easy to say now that if he had a “love affair” with Liverpool then we the supporters felt the same way about his massive importance to the club’s success under Gerard Houllier and Rafael Benitez.

Ghostwriter Malcolm McClean has obviously spent countless hours with Hamann, listening to and assessing his comments. The words might be Dietmar’s but Malcolm has put them together brilliantly with each chapter running seamlessly on to the next. Chronologically it is as accurate as it could be. There are a few doubts, however, about its historical accuracy. Factual errors are unfortunately often rife in football autobiographies. I cannot level that accusation with any real conviction at Messrs. Hamann/McClean, which is why I was very surprised to find a reference to Liverpool’s “1984 European Cup Final against Juventus” (!) only a few pages after another reference to the same final showed the correct opponents (Roma). It was contrary to the accuracy of the other events recorded in this book that an obvious error like that should slip through.

Hamann’s stay in the north-east of England was only brief. To help make the club aware that he wanted to move on, the player did not turn up for pre-season training in the summer of 1999. Amazingly, nobody at Newcastle said anything about his absence! It wasn’t long before he became the seventh and last of Gerard Houllier’s signings that summer. Dietmar recalls that an “unstoppable momentum” was gathering pace at Liverpool and that Houllier’s “influence on the club was seismic”. He also remembers that as soon as he arrived in Liverpool he was “excited by the sights and sounds and welcomed by the people”. His courtship with the city and its inhabitants had begun.

Sadly, Didi received a bad injury in the early stages of his first competitive match for Liverpool on the opening day of the 1999-2000 season. This proved the wisdom of his insistence that there be a clause in his contract giving him the right to be treated by his own specialist in Germany should any injury require that level of treatment, as this one did. Once this injury had cleared up, he returned to the team and started to exert his influence on its performances. As comedian John Bishop puts it in the foreword to this fascinating book : “Didi came alive when the whistle blew and he had the ability to make something brilliant look easy.” 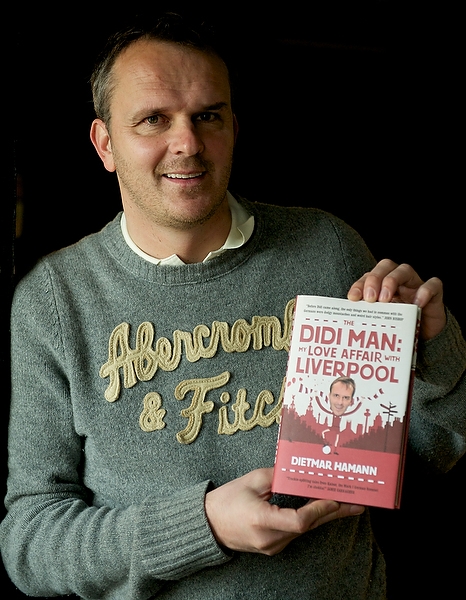 Hamann talks with refreshing honesty about all aspects of his life as a professional footballer in both Germany and England. He also talks warmly about the players, coaches and managers who most influenced him in those countries, particularly Jamie Carragher (he refers to him as the Cultural Attaché for Bootle!) and Giovanni Trappatoni, one of his early mentors at Bayern Munich. Didi does not forget less well-known players/officials whose path he crossed. It is not probably widely known that, unhappy that his only appearance in the competition had been in the final, he offered his 2003 League cup winners’ medal to one of the younger players who had appeared in earlier rounds. He explained his actions thus : “Valuing everyone who had made an effort for us was more important to me than personal gratification.” It was a warm and generous gesture by a man who, by his own admission, was becoming “a total Anglophile”.

It took a change of manager before Hamann’s finest moment in a Liverpool shirt could happen. The German immediately knew that a wise appointment had been made in Rafael Benitez, a man he describes as “a footballing genius”. Didi had been a member of the Liverpool teams beaten home and away by Rafa’s Valencia in the 2002-03 Champions League. Hamann is convinced that after losing to Valencia at Anfield “a few people that mattered in the higher echelons of LFC had noticed him, the small, smiling man with the receding hairline” who had become a blip on the radar-screen of Liverpool, “a blip that was going to shake the world”.

In 2002 Gerard Houllier had controversially substituted Hamann for tactical reasons during a Champions League quarter-final defeat in Leverkusen. Three years later the two clubs would again meet in the knock-out stage of the same competition. Again he was substituted (oddly, by the same player as three years earlier … Vladimir Smicer) but this time it was to protect an injury. As Liverpool progressed through the knock-out phase to the final itself, Didi opens up about what it was like to be a player in those momentous European ties, even though we do not really learn anything new about the remarkable final in Istanbul, other than his involvement in the hilarious spoof-documentary “Fifteen Minutes That Shook The World”.

We follow Didi to the end of his Liverpool playing days. Even though he was guaranteed an extension to his contract because of the number of matches he had played in 2005-06, he knew inside that the F.A. cup final against West Ham would be his last appearance in a red shirt. We follow him through his bizarre journey to Manchester City, despite signing a contract with Bolton Wanderers; and we follow him to Milton Keynes and Stockport as he starts a new chapter in his life and a role that he seems perfectly suited to take on having been “a very fortunate accidental apprentice” by listening to and learning from all the famous names that had coached him earlier in his life.

The book is bang up-to-date because it even covers his short but complicated spell in charge at Stockport County, a position he has not long relinquished.

As he moved on from his seven years at Anfield, Dietmar Hamann “wanted to leave Liverpool in a dignified manner so that people would have good memories of me.” He was thrilled with the reception he received on returning to Anfield as a Manchester City player because he knew at that moment that he would “always be a part of the Liverpool family”. He recognises and accepts that he came under the spell of the liver bird in a massive way and I am sure he knows that the supporters of the club he played for appreciated the way he integrated himself so easily into our culture.

I can see this book being re-printed in time to include additional chapters about Didi’s managerial life, even though the man himself knows that “just because you have had a successful playing career does not necessarily mean that you can be a good manager”. I was disappointed that there were no photographs in the book of any stage of Hamann’s life in football so far. Having said that, this book will make you laugh and it might occasionally make you cry (apart from crying with laughter, that is!) but above everything else it will make you glad that you read it because it is filled with warmth and happiness.