The Echo summed up Liverpool FC's history up to this point: "The career of the Liverpool Football Club has been a very chequered one, and they have gained a name for inconsistency in their play. Such a thing cannot be levelled at the management at any time, as through thick and thin, success and failure, the policy of those responsible for the club‘s welfare has always been a forward one. In recent years the ground at Anfield road has been remodelled, new stands and offices have been made, and everything possible that could go towards making the players‘ quarters worthy of a first-class club has been done. Spectators have been well looked after; three sides of the ground have covered accommodation whilst at the Oakfield-road end is the noted Spion Kop, which is unrivalled in England. On its slopes a big crowd can find comfortable standing-room and get an excellent view of the game." 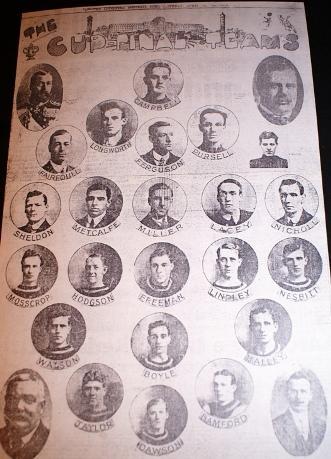 This is the preview of Liverpool's first ever team to play in a FA Cup Final from Liverpool Football Echo (Click on the image to the left to get a larger version):

Ken Campbell - goalkeeper, came to Liverpool from Cambuslang Rovers in May, 1911. Recognised as one of the best custodians of the present day. A native of Glasgow. Weighs 11 st. and is 5ft. 10in. in height.

Ephraim Longworth - right full back, joined Liverpool from Leyton in 1910. A sound defender, who is rarely off form, and has strong international claims. Born at Halliwell, near Bolton. Weighs 11 st.; height 5ft. 8 1/2 in.

Robert Pursell - left full-back, played as an amateur with Queens Park, Glasgow. Played as a forward, half back and full back for them at various times. He signed a professional form as a full back for Anfielders three seasons ago. He is a first rate sprinter. Born at Campbelltown. Weight, 12 st. height 5ft. 11 in.

Thomas Fairfoull - right half back. Previously with Third Lanark and Kilmarnock and played as a forward for these clubs. Has played for the Scottish League against Irish League. This is his first season at Anfield. Fairfoull was born at West Calder and weighs 11 st. 10 lb. and is 5 ft. and 9 1/2 ins. in height. Fairfoull is a very capable golfer.

Harry Lowe - centre half back, captain of the team. Born at Whitwell, in Derbyshire. He first made his name with Gainsborough Trinity. Left half back is his usual position, but he occasionally figured in the centre. Lowe's display against Liverpool in a cup-tie brought him to the notice of his present club, and he signed for them in the summer of 1911. He first played as a wing half-back, but then Harrop left he was moved to centre half position, and he has played many fine games as pivot. Lowe is a well-built player, Scales 13 st. 2 lbs and is 5ft. 10 ins. in height.

Robert Ferguson - left half-back, came to the fore with Third Lanark. He is a consistently good player who knows well how to break up opposing attacks, and is not slow in shooting at the goal when the opportunity occurs. Came to Anfield as a centre half-back, but has played really on the wing. Ferguson is a native of Cleland, in Lanarkshire, and as a lad worked in the mines. He stands 5 ft. 10 1/2 ins. and weighs 12 st. 5 lbs.

Jackie Sheldon - outside right. It was only last November that Sheldon was secured by his present club from Manchester United, with whom he had figured as deputy for the famous Meredith. Was accounted a capture and has certainly proved his worth. He is a tricky player and can centre splendidly, and has considerable speed. Sheldon was born at Clay Cross, near Manchester. His height is 5 ft. ? ins. [unreadable] and he weighs 10 st.

Arthur Metcalfe - inside right. A native of Sunderland. Was with Newcastle United before coming to Liverpool in 1912. He is a tricky forward who knows where the goal is. Metcalfe is a good cricketer, being a particularly smart wicketkeeper. Height 5 ft. 6 in. Weight 11 st.

Tom Miller - centre forward. Came to Anfield from Hamilton Academicals in 1911. Until this season generally played inside right or inside left. Has a rare burst of speed and a good shot and knows how to hustle the defenders. Miller was born at Motherwell. He is 5 ft. 8 1/2 in height and weighs 11 st. 5lb.

William Lacey - inside left. Irish international. Was born at Wexford. Came to the fore with Shelbourne and was secured from them by Everton. In March, 1912, he was transferred across the park to Liverpool and proved an invaluable player. Lacey is a clever dribbler, a good shot and an opportunist. A born footballer who never seems to give in. He works hard right up to the final whistle. Can play in practically every position on the field. Weighs 11 st. 9 lb. Height 5 ft. 8 1/2 in.

Jimmy Nicholl - outside left. Transferred from Middlesbrough to Liverpool last January. He is a smart winger, centres well and shoots strongly, makes for the goal at first instance. Nicholl is a Port Glasgow man and played with several Scottish clubs before heading south. He is 5 ft. 8 in. in height.

Note: Liverpool's captain Harry Lowe was expected to play in the final, but was unable due to injury. 23-year-old Donald MacKinlay took his place. MacKinlay didn't feature as a regular until after the World War in the 1919-1920 season. He went on to play 434 games for the club + 134 in wartime and is remembered as a legend at Liverpool Football Club.