Red All Over The World 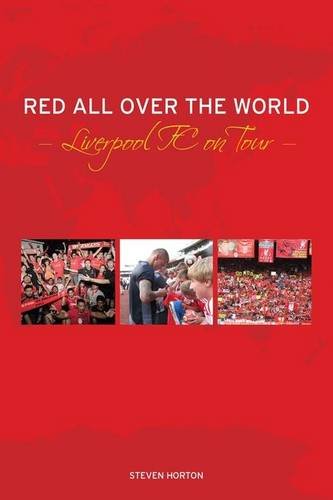 Following his excellent summary of Liverpool’s trophy-winning season of 1972-73 in Ending the Seven-Year Itch, the second in Steven Horton’s trilogy in the first half of this decade changes direction completely by moving away from competitive matches and focusing on friendly matches that the club has played throughout its history. Red All Over The World is indeed an appropriate title because, South America apart, Liverpool Football Club has indeed travelled to pretty much every corner of the globe in its one hundred and twenty-one year history to entertain followers of the game from many different cultures and backgrounds.

Steven is a proficient and authoritative local historian as well as being extremely knowledgeable about the football club he has supported all his life. But the internet is only a recent phenomenon so there is only one way to properly research events that took place decades ago; and that is by the most painstaking detective work that usually involves spending hours trawling through old newspaper reports and articles, something this author has always been prepared to do with the utmost diligence so that he can get at the facts and then relay them to others.

Liverpool teams started travelling almost as soon as the club had been formed. In the early days some tours at the end of a season gave the club an opportunity to reward its players with a sort of ‘busman’s holiday’ because it was unable, officially anyway, to supplement a player’s wages with extra payments. But the schedule was extremely demanding. In the club’s inaugural season, 1892-93, twenty-five competitive matches were played (twenty-two in the Lancashire League and three in the F.A. cup) but an astonishing thirty-seven additional matches were added including seven crammed into a two-week period in the second half of April after the Lancashire League fixtures had been completed in the middle of that month. Over half those extra matches took place at Anfield and a lot of the away friendlies were not geographically far from the city of Liverpool. But there was still an arduous (for the time) trip to play Glasgow Rangers in Scotland as well as visits to Middlesbrough, Stoke and Newcastle. Scotland was a popular destination as the decade reached its end with five matches being played there (including games on a Monday, Wednesday, Thursday and Friday of the same week!) in April 1897 followed by matches at Heart of Midlothian and St. Mirren in January of the following year. Steven Horton’s research for these early trips is quite phenomenal because he has unearthed details of the travel arrangements as well as details of the matches themselves; and this is a pattern which he continues through the twentieth century and beyond it as the club continued to rack up an impressive total of foreign countries visited once the overseas tours started in earnest with Scandinavia being visited in both 1910 (4 matches) and 1914 (7 matches) to which Italy and France were added in the early 1920s with other nations on the European mainland following in the 1930s (Czechoslovakia, Yugoslavia and Romania).

There have been six tours to North America (1946, 1948, 1953, 1964, 2004 and 2012) during which a total of forty-seven matches were played against either local teams or European opponents like Porto, Roma and Hamburg who had also arranged trips across the Atlantic Ocean as part of their own pre-season preparations. The players who went in the summer of 1946 seemed to benefit particularly from the month spent in a ration-free America because they returned to Britain in prime condition for an extraordinary long First Division season (first match last day of August, final match last day of May) at the end of which George Kay’s boys became English champions for the fifth time, ending a barren trophyless period of over twenty years.

Bill Shankly’s arrival in late-1959 changed the whole ethos of the football club and one of the things the new manager did, although not immediately, was to look more carefully at the pre-season period and work out a plan that might help the players to peak at the right time during the season. There were still end-of-season trips to often exotic locations but in the summer of 1967 three matches were arranged against the West German clubs Cologne, Hamburg and Hannover and a number of similar one-off matches were played in both Germany and Holland in the next decade against opponents the Liverpool managers felt were ideal to meet close to the start of a new English season. It was an inspired change of plan. It probably wasn’t a coincidence that the men who participated in pre-season matches in those two countries in 1972, 1975 and 1976 found themselves with a League championship medal nine months later.

Ireland, where the club has a massive fan-base and Scandinavia (particularly Norway) have seen various Liverpool teams visit and play in front of huge, passionate crowds bedecked in red. The author has drawn on the memories of supporters who attended such matches which, when added to his own meticulous research, bring the occasions to life in a most vivid and colourful way. As the club’s profile rose through its unprecedented success in the 1970s and 1980s invitations continued to arrive but it wasn’t of course possible to satisfy all requests although away from Europe the club did manage to get to a number of locations in the Middle East and the Far East. Swaziland had been visited for two matches against Tottenham Hotspur in the immediate aftermath of the 1984 European cup win and exactly ten years later Liverpool played three matches in South Africa, two in Johannesburg and one in Cape Town.

The club failed to capitalise on its marketing opportunities during its most successful period in terms of trophies won but its name continued to grow and thrive throughout the world in spite of two terrible tragedies and a much leaner period on the pitch. But the trophies started to return in the opening decade of a new century and with that came the chance to open new doors which resulted in the hugely successful tour to Indonesia, Australia and Thailand during the summer of 2013. The Australian leg in particular was massive with an enormous crowd of over 95,000 attending the game in Melbourne. Officials from the club regretted that it had taken so long to get there and admitted that they would be looking to return again soon given the ‘film-star’ reception they had been given everywhere they went. The same could be said for the Indonesia and Thailand legs of this tour.

South America remains untouched and despite an influx of South American players in recent times is likely to remain so. Liverpool Football Club’s good name, so horribly tarnished by Heysel, appears to have been fully restored and even enhanced. The Shankly and Paisley pre-season tours to countries in Western Europe appear to be largely consigned to the past now. L.F.C. is a global brand and has been for a long time. The club can now look at profit for the club instead of optimum fitness for its players.

Steven’s book appears in neat chapters that are as much geographical as they are chronological. There are some wonderful stories in here and the tours in the first part of the twentieth century are particularly fascinating. The text is supplemented by some terrific pictures of the players and some of the locations in which they stayed as well as reproductions of match-programmes and tickets through the ages. For anyone who supports L.F.C. and who has an interest in the unusual and sometimes quirky nature of life at a big football club, this book with its stories about so many non-competitive matches is a publication to be both enjoyed and treasured.