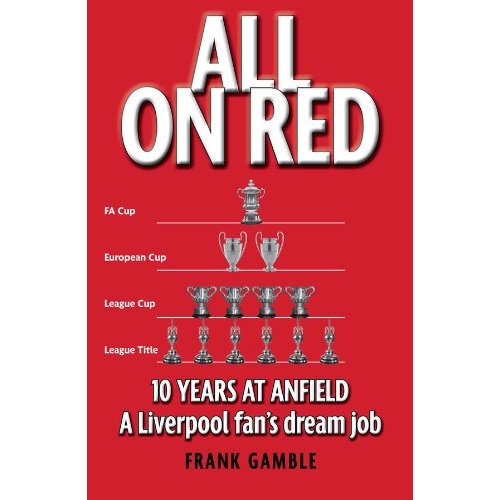 Frank is the latest in a growing number of Liverpool supporters (some more well known than others) who have published their stories. The difference between Frank and all the others is that he was an employee of the club and was therefore on the inside looking out instead of being on the outside looking in like the rest of us. Despite that advantage, I still sensed a certain reluctance by Frank to put pen to paper. He believes that those “who attend the matches” or who work behind the scenes at a football club have “a more rounded view than armchair supporters”. He also recognises that the days of ghost-written autobiographies, what he quaintly but accurately describes as pre-1980s B.C. (before computers), are gone to be replaced by a plethora of publications written by supporters who claim to be “the voice of the man of the terraces”. If growing up our dream job was ‘to play for Liverpool Football Club’, closely following behind it might have been ‘working for Liverpool Football Club’. Accepting that he would never be good enough to be a professional footballer, Frank can certainly speak with authority as someone who was employed by the club through a quite momentous decade in that club’s history.

The important thing about stories like Frank’s (just as it was with authors like Brian Reade, Neil Dunkin and Peter Etherington before him) is to get the balance right between life as a Liverpool supporter and life per se. Yes, of course it is useful to get an idea of the man behind the name but not at the expense of getting too involved in that man’s private/domestic life. That is an important part of the whole story but it does not make the whole story. People will buy this book because they know Liverpool Football Club not because they know Frank Gamble.

Frank gets the balance right as he talks about his upbringing under an Evertonian father whilst being astute enough to realise that “in places like Liverpool where football is as important as air and water, your choice of allegiance is the first major decision you will probably take in life”. He decided that Red not Blue would be his choice and was captivated by the skill of Peter Thompson who became his first big favourite. As the Sixties became the Seventies his love-affair with the club continued to blossom and he recalls fondly the pilgrimage to Rome in 1977 remembering that the train they had to board at Lime Street “didn’t look as if it could reach Edge Hill never mind Folkestone”. Many older readers will certainly endorse that observation!

Towards the end of the 1970s Frank answered an advertisement placed in the Liverpool Echo newspaper looking for a Lottery Sales Manager to work for LFC’s Development Association. A phone call from club Secretary Peter Robinson led to an initial interview and he was called back for a second interview with Chairman John Smith, after which he was offered the job. His immediate boss would be a man, Ken Addison, whose name is familiar to thousands of Liverpool supporters. Ken, the Commercial Manager in charge of the Development Association, told Frank “This is your extended family” as he introduced him to his new colleagues.

Frank’s remit was to ensure that “sales remained at an acceptable point”. He was so fired up to pay back the faith that Ken and the Board had put in him that he “relished every day” even though as time went by he became aware that going to work at Anfield “was becoming more and more like a soap-opera” ! Life in Britain was changing. “The economy was dire, jobs were falling at catastrophic rates” but they were still expected to maintain their revenue streams. But “the most frustrating thing was seeing the enormous commercial potential the club had during its halcyon days unfulfilled, when they had people there who were not given the chance to use theirs”. Chairman John Smith became obsessed with cost-cutting at Anfield. Opportunities were missed to promote the club to the wider world, as Frank recalls when he poignantly says “These were the days and times when the club should have pushed the pedal to the floor in terms of pulling away from our rivals commercially. We have been playing catch-up with our rivals to this day. We were so slow out of the blocks and it cost us dear”.

Through his daily work Frank gradually became acquainted with the legends of the club himself and immediately noticed how down-to-earth they all were but how focused and committed they were as well. “Their attention to detail was truly amazing and their knowledge of the game unsurpassed”. In particular he remembers Chief Scout Geoff Twentyman : “LFC owes this man an enormous debt of gratitude for all the diamonds he unearthed and his dedication to the cause”.

Frank worked for the club at the time of Heysel but not Hillsborough. The longest chapter in this fascinating book is devoted to the first tragedy. Hearing the before, during and after testimony of a club employee is very revealing. Britain was “an angry society” in 1985, a year in which there was so much unrest and disorder at football grounds throughout the country. The violence that surrounded the 1985 F.A. cup semi-final at Goodison Park was “a bloodbath waiting to happen”. The following month in Brussels blood flowed for real in the most appalling way. Frank was deeply traumatised by what he saw that day, sadly knowing that the inevitable aftermath was that “we were out in the wilderness, despised by everyone”. Working for the club no longer gave such pride and enjoyment. “There was a stigma attached to being part of the organisation involved in such a terrible event. But because the organisation had been held in such high esteem beforehand, the fall from grace was incalculable”.

Maybe Heysel was the catalyst that was the beginning of the end of Mister Gamble’s time as an LFC employee, an employ for which he surprisingly never had any sort of written contract. Life changes for us all and we have to make decisions that change the way our lives run. If you work for the football club you have supported through thick and thin all your life, that allegiance does not change because your own life changes when it comes to employment. “Just because the boy becomes a man doesn’t mean you leave all that stuff behind. You never do; in fact the intensity grows as time goes on”.

Frank Gamble’s idea for this book was to try and express what it was like crossing the threshold of just being a fan to depending on that commitment for your livelihood. His idea bore fruit and it is a quite remarkable account of what it was like to work for Liverpool Football Club during one of the most successful periods of the club’s long and illustrious history. Only two things disappointed me. One : that there are no photographs included in the book. Two : that there are factual errors I believe should have been spotted and corrected before publication. Despite Frank’s closing words “It’s how I remembered things. If my recollections are incorrect, then I apologise” I was disappointed to read about certain matches I remember very clearly when the order of events was not as described in this book. Putting that aside, though, this was a most interesting book to read because even if it did not tell me much historically that I did not already know, it was enthralling to hear the account of someone who was actually employed by the club; and that is the main reason why I would recommend this book to all Liverpool supporters ... because it hasn’t to my knowledge been done this way before.