The Team of All the Macs 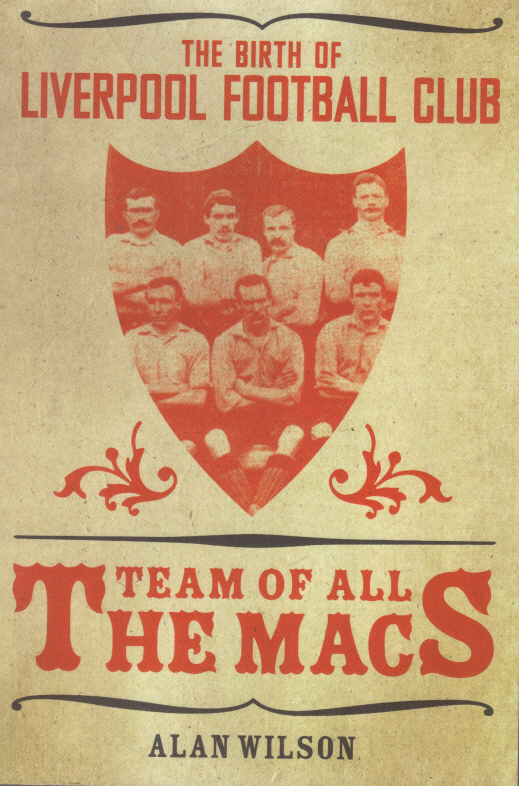 “If you know your History”, the Blues regularly bellow in a line from one of their favourite songs. The question is : Just how much does the average Everton or Liverpool supporter really know about the history of their respective clubs? Until recently, the answer would probably be ‘not very much’ even though all supporters Red or Blue ought to know about the origins of professional football on Merseyside and how Liverpool F.C. was born in the aftermath of a very bitter, acrimonious split between Everton F.C. and its landlord and President, John Houlding.

Until quite recently, many of the finer details about that split and the founding of a second club in the city had never come to light. That changed with the publication of “Across The Park” by respected Merseyside football historian Peter Lupson in 2008; and also by Norwegian Kjell Hanssen’s book “Dicky Sams”, which chronicled in great detail the first few years of Liverpool Football Club’s existence. Now the trilogy is completed with Alan Wilson’s “Team Of All The Macs” which, while also explaining the reasons behind L.F.C.’s birth, concentrates on the deliberate recruitment of Scottish players as the fledging club attempted to make an immediate impact.

Houlding’s main adversary on the Everton Board was George Mahon. The two men knew other well and had often clashed in the past, although this was often more about political than sporting issues. If John Houlding was determined to do anything necessary to make his new club THE football power in the city of Liverpool, that is understandable. When Everton had to leave their previous ground in Priory Lane, it was only Houlding’s generosity that had enabled the club to stay alive by buying for their use a piece of land between Anfield Road and Walton Breck Road. Many members of the Everton club had rewarded their benefactor by mounting a scurrilous campaign against him that ended with him being stripped of the club Presidency and expelled. Backed into a corner, he now gave them notice to give up possession of the land he had bought for them to use. Houlding’s opponents even made known their intentions to dismantle the stands at Anfield and take them to their new site at Goodison Road. Houlding told them where to go with that idea even though at the time he had a decent stadium but no team to play at it. Mahon apparently was keen to leave Anfield as “a howling wilderness” but Houlding took action to prevent such wanton vandalism from happening.

As Liverpool President, John Houlding quickly employed the former Everton Secretary, William Barclay, to the same position with the newly-founded club. John McKenna was put in charge of team affairs so effectively became the club’s first manager. Although Barclay was asked to assist McKenna, it was definitely McKenna who was the senior partner and it was he who was sent into Scotland with the brief of doing a wide recruiting campaign, even though the attraction of playing for Liverpool had been lessened by an administrative error that would see the club’s inaugural season being in the Lancashire League and not, as had been hoped, in the Football League itself.

Professionalism had been legalised by the English Football Association in 1885 but their Scottish counterparts, only founded in 1873, were still a few years behind but had accepted the inevitability that it was only a matter of time before professionalism would happen in Scotland as well. McKenna wasn’t the only representative of an English club who journeyed north of the border looking for new talent. But he had one advantage over most of the others. His task of finding “a first class player for every position on the pitch” was aided by using a Scottish scout so that when he travelled north he already knew the names of the players he was targeting and their clubs. He was also able to reassure potential recruits that the amount of money the club was prepared to pay its new players would not be lowered just because that club had not been accepted into the Football League. There was no shortage of players willing to move south, even though the Scottish Football Association caused some to think again by blacklisting men who were known to have turned professional in England, effectively barring them from ever playing (or playing again) for the country of their birth. It was a policy that backfired spectacularly. The national team, so strong in its early years, started to lose matches at an alarming rate and the S.F.A. realised it could no longer discriminate against men who had chosen to live and work in another country. There was a kind of almost vigilante culture against English scouts attending matches in Scotland looking for new players but McKenna (and representatives of other clubs) soon found a way around that as he put together a team with a “particularly strong Scottish flavour”. Although most players had decided to move to Goodison Road with the Everton club, two former Everton players (Duncan McLean and Andrew Hannah) had chosen to join John Houlding’s empire at Anfield and they, together with the newer recruits, took part in an open training session shortly before the new season officially started, a session that attracted close on 6,000 spectators curious to see this new blend of old and new.

Five chapters and over eighty pages are taken up with a detailed account of the club’s first competitive season, 1892-93, a season that saw Liverpool win the Lancashire League on goal-average from Blackpool, both clubs having finished with 36 points from their 22 matches. In the match at Blackpool in November, Liverpool fielded a team containing no fewer than 9 men who had previously played in Scotland. This match was even billed as Lancashire against Scotland in some newspapers. Liverpool’s already large Scottish contingent was augmented with the arrival of brothers Hugh and Matt McQueen in October, both of whom would have a big influence as time went on.

It is clear that author Alan Wilson has spent a considerable amount of time meticulously going through old newspapers and periodicals of the time; he does indeed acknowledge his debt to these “great pioneers of football journalism”. Writing styles in the 1890s were considerably different to what they are today, when many authors used flowery, old-fashioned words that today’s readers would struggle to make sense of. Alan, however, to his credit has not imposed those old styles on the modern reader, choosing instead to put match-reports together with words and phrases that are much more familiar, which is why I was surprised to find a description of the Anfield pitch in October 1892 as “the ground underfoot deteriorated to resemble the Somme” some twenty-four years before that First World War battle took place! That is a small and rather facetious criticism though. His text is complemented by some excellent photographs/drawings/advertisements of the time. For someone with a desire to learn more about Liverpool Football Club’s early years, this book would make an excellent addition to any collection.