18.12.1999 - Coventry 2-0 - Celebrating the 40th Anniversary of Bill Shankly's arrival at Anfield. A mosaic across the top of the Kop spelt the word 'SHANKS'. Below were two images of Shanks' face flanking the Cross of St Andrew.

"Some of the great names from Liverpool's past 40 years were introduced to the fans, the two Scots pipers on the pitch played Shankly's favourite hymn, Amazing Grace. On The Kop the Kopites held up 12,000 coloured cards. Barely a minute into the hymn and the Kop began singing - slowly, and almost in hushed tones, "Shankly, Shankly". I swear it was one of the most moving things I've ever heard; the hairs stood up on the back of my neck. It was difficult to hold back the tears. The cards were then hurredly put aside and the massed flags and banners were unfurled. This was the loudest, most passionate YNWA that I've heard in years. It was twice as loud and twice as stirring as the CWC semi with PSG which many rate as The Kop's greatest hour since it was seated. From my position front and centre I could see the (truly) massive 'All Around The Ground The Kop Spirit Survives' banner being passed back up over hundreds of heads. It brought a lump to the throat. The anthem continued way past it's normal end point - it was if we didn't want it to end." - From Red All Over The Land. 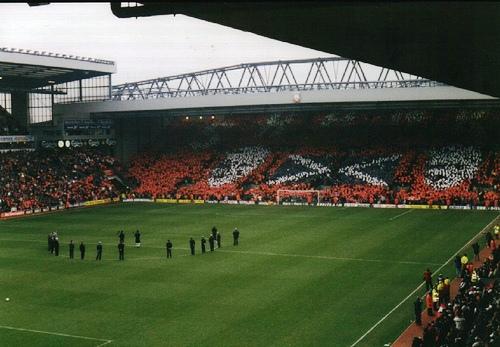