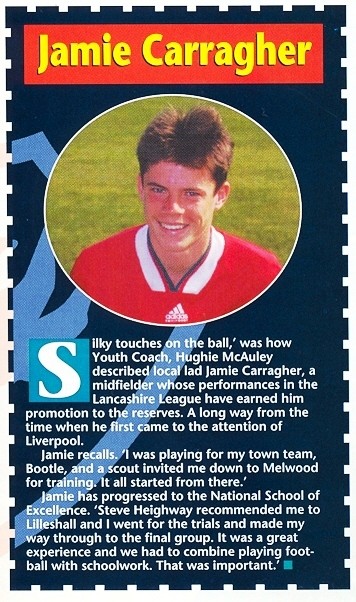 Jamie Carragher started the 2010-11 season on 630 first-team appearances for Liverpool Football Club. At that time (August 2010) there were six players ahead of him in the club’s all-time appearance list. But with Carra averaging over 50 matches per season for the whole of the previous decade (520 appearances from 2000-01 to 2009-10 inclusive), it seemed that only injury and/or suspension could prevent him from overtaking Tommy Smith (638), Phil Neal (650), Ian Rush (660) and Emlyn Hughes & Ray Clemence (both 665). Jamie would only have to play in around two-thirds of Liverpool’s matches in 2010-2011 to overtake that famous quintet … and that would leave only Ian Callaghan ahead of him with a total (857) that no Liverpool player Present or Future is ever likely to get close to. To emphasise Cally’s astonishing achievement, Carragher would have to play nearly fifty times for another four seasons and at the age of 31 now that is, frankly, rather unlikely. His football brain might be as agile as it ever was but it is hard to see his body surviving the rigours of the physical English game until the middle of the current decade.

Rather than forecasting how much longer Jamie Carragher might continue to appear in Liverpool’s first-team, it is more appropriate to reflect on the Past that has now enabled him to rise to become the club’s second-highest representative in competitive matches, a journey that started on a cold evening on Tees-side over fourteen years ago. Jamie replaced Rob Jones with a quarter of an hour left in a League cup-tie at Middlesbrough and slotted comfortably into Rob’s right-back slot, so comfortably that manager Roy Evans had no hesitation in naming him in the matchday squad to play against West Ham on the weekend following that cup match. He was again asked to come off the bench against the Hammers, this time to replace central-defender Neil Ruddock at half-time. A week later he made the starting line-up against Aston Villa, in midfield in place of the unavailable Patrik Berger. Not only did Carragher score his first Liverpool goal by heading in a left-wing corner shortly after the interval but he was already showing his versatility by performing in three different positions in his first three outings. That versatility, his ability to switch comfortably from one position to another, would be shown many, many times in the coming years. Even if the midfield position he was asked to play in against Villa did not become a regular occurrence, he certainly proved that he was competent enough to fill any of the defensive positions; on the right, on the left, in the middle didn’t matter to the young man from Bootle. He knew he was good enough to play anywhere in the defence … and the club’s vast fan base soon knew it too.

Despite his remarkably-successful full debut, Roy Evans used the 19-year-old sparingly in 1997-98 with Jamie starting just 20 of the team’s 48 League and cup matches. It was during the following season which started with Roy Evans and Gerard Houllier as joint-managers before the Frenchman took sole managerial control in November, that Carragher became more of a regular than simply a squad-player. Jamie missed just four Premier League matches in 1998-99 and only two a season later. Rotation of the squad system means that a player being ever-present throughout an entire League season is now quite unusual. Yet Carragher achieved this feat twice (in 2004-05 and 2008-09) as well as making over thirty Premier League appearances in every full season since his 1997 debut except for 1997-98, 2003-04 and the current campaign just about to end. In the second of those three seasons, his absence was excusable after his leg was broken at Blackburn. By the time he was fit enough to be available for first-team action again, his regular place in the team was threatened by Steve Finnan on the right and John Arne Riise on the left. As a result and even though he was quite capable of playing in either full-back position, it became more common to see Jamie occupying one of the central defensive positions and this certainly became more prevalent after Stephane Henchoz left. The Henchoz-Hyypia defensive partnership had been immense but Carragher-Hyypia would be even more so. 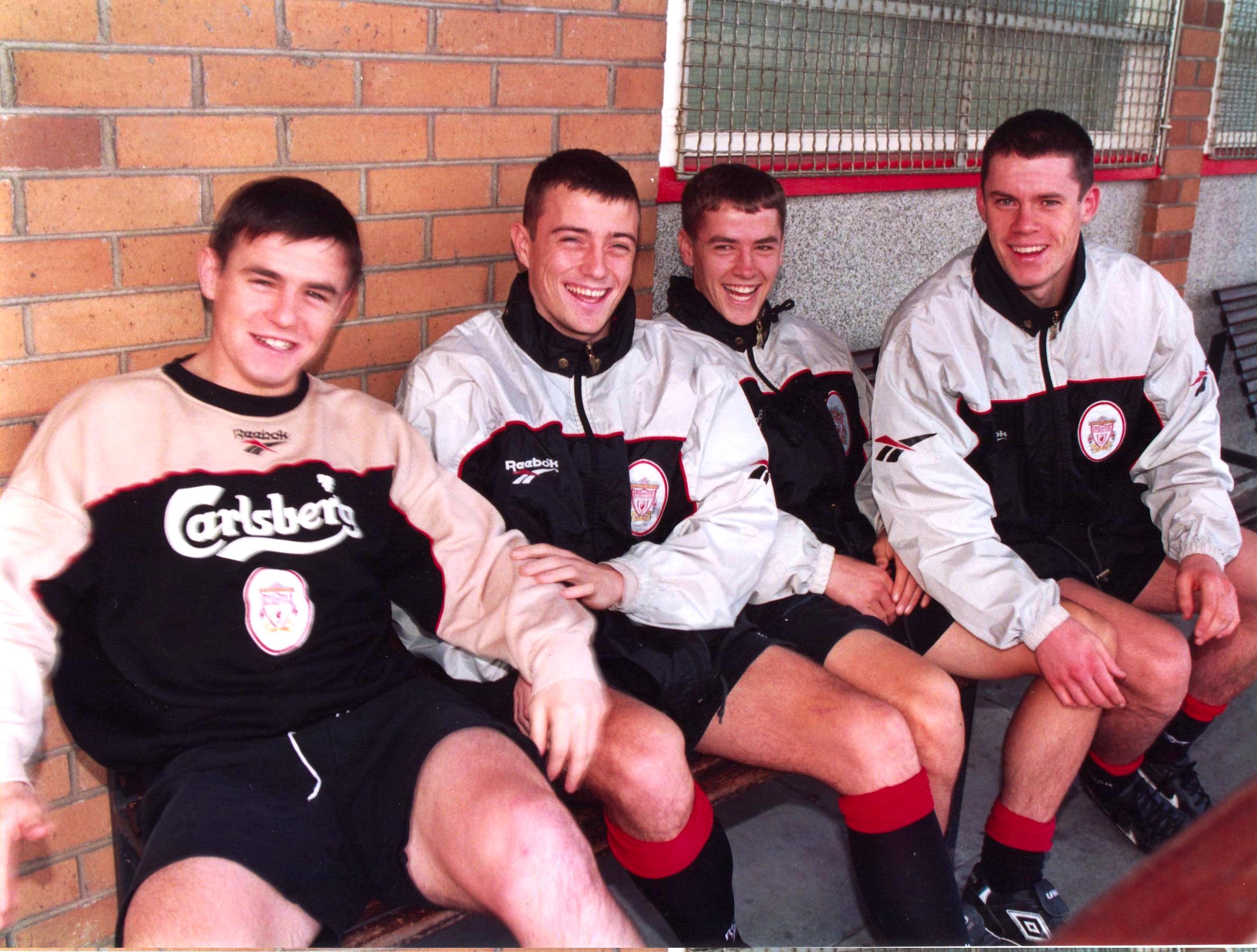 The up and coming Carra along with David Thompson, Jamie Cassidy and Michael Owen.

Jamie had been a member of Liverpool’s F.A. Youth cup-winning team in 1996. His first tangible success at senior level came five years later in the historic ‘cup treble’ season. At Cardiff’s Millennium Stadium, where penalties were required to decide the first domestic trophy of the season, it was Jamie who stepped up to coolly place his spot-kick high past Ian Bennett’s left hand with the shoot-out level at 4-4. The next kick, by Birmingham’s Andrew Johnson, was parried by Reds’ keeper Sander Westerveld so Carragher’s composure under the pressurised spotlight was extremely vital if somewhat unexpected because he was not a man many supporters would have chosen to take a crucial penalty-kick. At Porto in the UEFA cup that season, Carragher made his 150th senior appearance, reached 200 in the F.A. cup against Birmingham City the following January and then, exactly a year later to the day, got to 250 in another F.A. cup-tie, this time at Manchester City. Racking up matches at that rate meant that it was only a further five years before he reached five hundred, the occasion being an Anfield F.A. cup replay against Luton Town for which he was given the honour of captaining the team as well as being allowed to have his son James run onto the pitch alongside him as the club’s mascot for the night.

Very few players in modern times stay at a club long enough to make five hundred appearances for that club. The fact that Jamie achieved this before his 30th birthday bears testament to his reliability as well as his consistency plus his often-stated admission that he had no desire to play for any other club. Evans, Houllier, Benitez, Hodgson and Dalglish all realised what an important part of the team he was, how much he was loved and admired by the club’s supporters and respected by his fellow professionals. It often seemed that the more there was at stake, the better the man played. Twice against Chelsea in Champions League semi-finals, but particularly in the Anfield leg of the 2005 encounter, Jamie gave a colossal performance as the defence heroically held firm to prevent Chelsea from scoring the goal that would have taken them through to the final. Three weeks later in that legendary Istanbul final Carra put his body on the line time and time again, especially when he suffered from agonising cramp in extra-time. Rarely on a big stage has any player showed the courage and determination that Jamie Carragher showed that evening, the pride in the shirt that he wore and the never-say-die attitude that he and his team-mates all needed to find to drive them on to the ultimate victory. 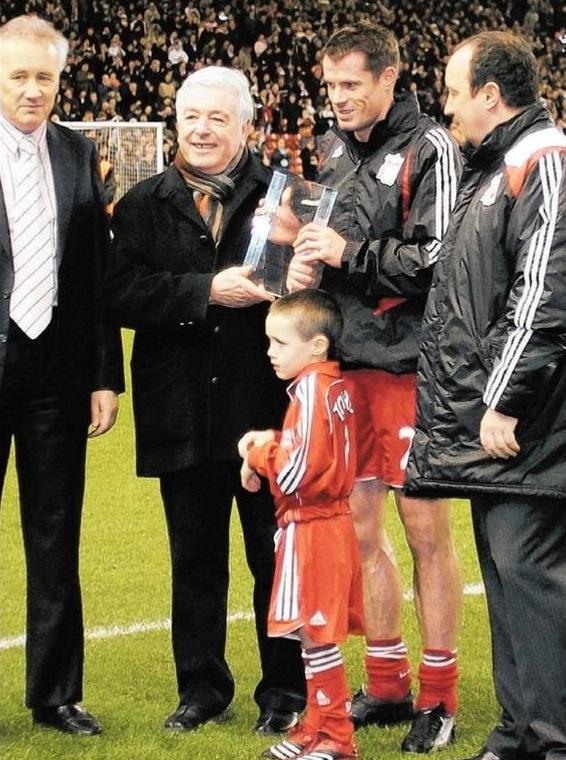 If there is one small blot on a spectacularly successful LFC c.v., it is that Jamie has unfortunately scored more goals against Liverpool than for them. It’s probably an inevitable part of a defender’s life that he will sometimes, in trying to prevent a goal, unwittingly make the crucial contact or deflection that sends the ball into his own net. The highest-profile of Carragher’s seven own-goals was the opener in the 2006 F.A. cup final; the first and third of three for Tottenham were separated by a full decade; and he once scored two in the same match (against Manchester United in 1999). On the credit side he has scored five times as he prepares to finally eclipse at Fulham the appearance totals of Hughes and Clemence, Craven Cottage also being one of the three locations at which he had been shown a red card, the other two oddly enough also being in London (at The Valley in 1999 and at Highbury in 2002).

With only Ian Callaghan now above him in the appearance list, who knows how close Jamie can get to Cally’s remarkable total? What we do know is that the Bootle-born defender will continue to give of his best every time he is selected to represent the club. As first new owners and then a new albeit familiar manager came in as 2010 turned into 2011, supporters saw signs that when Jamie’s playing days are over, he will probably make a successful coach/manager as well. If youngsters coming into the first-team picture were a little star-struck by the men they would be playing alongside, they had no reason to be. The club’s vice-captain cajoled and encouraged the likes of John Flanagan, Jack Robinson and Martin Kelly as they started their fledgling Liverpool careers. It is doubtful if he needed to be asked to take on that role. It is almost certainly something he did instinctively, just as he had benefitted from the ‘mentoring’ role shown to him by more experienced defenders when he came into the first-team picture himself in the late 1990’s.

Over the course of a season, Jamie Carragher moved from 7th place to 2nd place in Liverpool’s all-time appearance list. He may never reach 1st place but it probably isn’t a particular personal target anyway. He will just want to play on for as long as he can while he (and his manager) believe he can still ‘do a job’ for the team. Only Steven Gerrard (556 games) from the current squad has a chance to reach the figure Carragher has reached now; and we can predict fairly confidently that no player in the club’s short-term or long-term future is likely to get close to the total Jamie Carragher will reach at Craven Cottage on Monday evening.