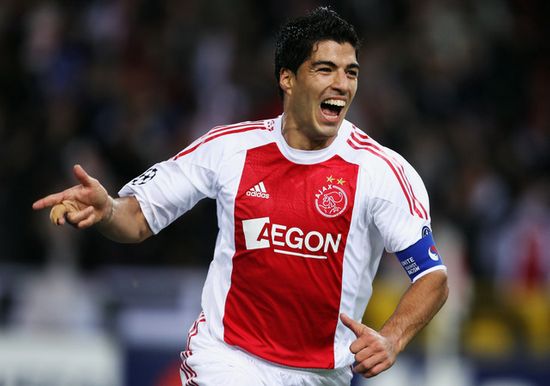 In the final days of the January 2011 transfer-window … and after four weeks of that window during which press-coverage of Liverpool Football Club was more about the manager than any player … news broke that Uruguayan Luis Suarez would be joining Liverpool from Ajax Amsterdam. Any supporter assuming that Suarez would be partnering Fernando Torres soon realised that would not happen and the "Torres to Chelsea" story became much bigger than any Suarez story which was a pity because the new Anfield arrival had a goals-per-game ratio that was even better than the Spanish hitman.

Luis Alberto Suarez Díaz was born in Salto, the second-largest populated city in Uruguay behind the capital, Montevideo. As a youngster he began his professional career with Nacional in Montevideo and helped them to win the Primera División in 2005-06 while still a teenager. Inevitably, as with many other promising players from South America, he came to the attention of a number of European clubs and this led to a move to Groningen in Holland when he was still only nineteen years old. However, he only had one season in the Dutch Eredivisie at Groningen (37 matches in all competitions, 17 goals) before big-city club Ajax signed him for seven and a half million euros in August, 2007.

Suarez was just as prolific a scorer in Amsterdam as he had been at his first club in Holland. Eighty-one goals from 110 League matches in three and a half seasons was a rate that few strikers in world football could match. Inevitably, he was becoming a star on the international stage too, having made his full debut for Uruguay while still a Groningen player. After that he became a regular for his country up to the 2010 World Cup in South Africa, for which tournament he was unsurprisingly named as one of the twenty-three men in the squad of national coach Óscar Tabárez. The way Suarez performed in South Africa catapulted him to the watching world’s attention in a big way. He started all three group matches and scored the only goal of the final group match against Mexico that ensured Uruguay would top Group A. He then scored twice in a 3-0 victory over South Korea that led to a quarter-final match-up with Ghana. Unfortunately, Suarez then received much negative publicity for a deliberate handball that led to a penalty (which was missed) and a red card that ruled him out of the World Cup semi-final with the Netherlands. After serving his one-match ban, he was recalled for the 3rd/4th place play-off in which Germany beat Uruguay by three goals to two.

Soon after resuming his club career in Holland following the conclusion of the African World Cup, Suarez became one of only a handful of players to score a century of first-team goals for Ajax. Not long after this meritable landmark was achieved, his club punished him with a two-match ban and a heavy fine after he had bitten an opponent who was playing for PSV Eindhoven. The Dutch Football Association extended this ban to cover seven League matches. This controversial incident led to much speculation that his time in Holland was coming to an end. It did not, however, put off interest from several European clubs, all of whom realised that one piece of negativity regarding the player’s temperament did not change the fact that he had an outstanding goal-scoring record. Damien Comolli, Liverpool’s newly-appointed Director of Football Strategy, travelled to Holland on the 24th of January 2011 to discuss terms with Ajax Amsterdam. At the time he made that journey, Comolli knew that Suarez was keen on a move to an English club, having stated quite publicly that “England is a league that attracts me - alongside the Spanish league, it is the best in the world."

Ajax were unimpressed by Liverpool’s initial offer but that offer was upped until it matched the selling club’s valuation of their star striker. Four days after Comolli flew to Amsterdam, Liverpool announced on their official website that they had reached agreement with Ajax about a price, believed to be £22.8 million, which meant that they were then able to talk to the player and his representatives about personal terms.

Up to his arrival in England, Luis Suarez had scored 101 goals in 164 League matches with three different clubs in Uruguay and Holland. With Liverpool having scored only 31 times from their opening 24 League matches of the 2010-11 season, it was likely that the arrival of a respected and admired scorer could only improve that low rate. Suarez had already proved that he could make the transition from one continent to another. Moving from one club to another within the same continent as a 24-year old should not be as difficult as moving from South America to Europe as a 19-year old.