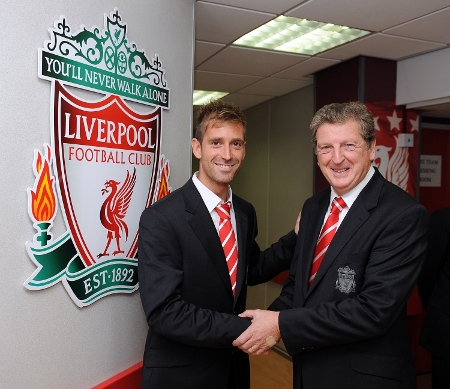 Twenty-seven year old Portuguese midfielder Raul Meireles from Porto was introduced to the Anfield crowd before Liverpool’s home match with West Bromwich Albion on 29th August holding the No. 4 shirt previously worn by Alberto Aquilani, who had just moved to Juventus.

Before moving to England, Meireles had played all his club football in his homeland, having had spells at Aves and Boavista before moving to then European champions Porto in 2004, where he soon became first-choice as a central midfielder.

Meireles' name is not splashed across the papers, but is suits him perfectly to get on with his work quietly. He covers more ground than anyone else, has an above average shot, and great vision. His work ethic makes him an indispensable player and he never hides, giving 100% in every game.

During his six seasons with Porto, Meireles was part of a squad that won the Portuguese title four times, the Portuguese cup on three occasions and the Portuguese Supercup also three times. As his reputation grew, international recognition followed with his full international debut coming in 2006. He was a member of his country’s squad for the 2008 European Championships in Austria/Switzerland and also the World Cup in South Africa two years later, where he played from the start in all four of Portugal’s matches, scoring the opening goal of their 7-0 thrashing of North Korea in Cape Town. At the time of his move to Liverpool, he had appeared 38 times in senior internationals and scored six times.

When still only in his mid-teens Raul helped Portugal win the 2000 European Under-16 European Championships which was held in Israel. Since then, his progress has been swift and each time he has moved it has been to a club with a higher profile than the one he left. Since his impressive performance in the 2010 World Cup he has been linked with big-name clubs such as Real Madrid, Barcelona, Inter, Chelsea and Manchester United. As a player with considerable experience already as he approaches what should be the peak years of his career, he looks like being an important option for new Liverpool manager Roy Hodgson as he attempts to assemble a squad that is capable of challenging for the game’s main prizes.