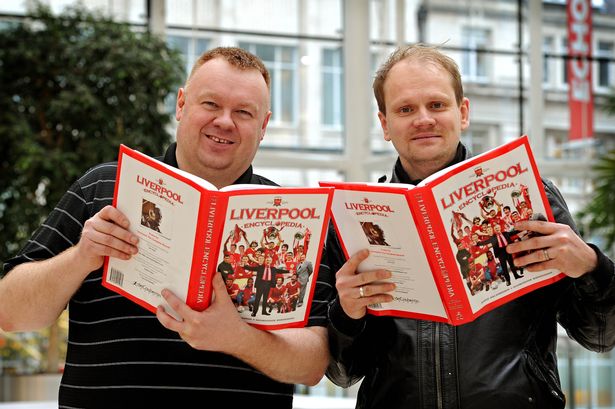 Dave Prentice's interview that was published in the Liverpool Echo on Monday the 18th of November + a web-interview for Echo's site. Emphasis on the book and our website LFChistory.net.

Watch: Liverpool FC Encyclopedia writers talk books, Brendan Rodgers and a love of LFC - go to Liverpool Echo's site to watch a second nterview that was done exclusively for their website.

Who's the biggest “winner” in Liverpool FC’s history?

Not medals collected, of course. Everyone knows that’s Phil Neal. Not trophies lifted as skipper. Most of you can name Emlyn Hughes.

But which Anfield icon boasted the greatest win ratio throughout his Reds career?

The answer, with a staggeringly impressive ratio of 62.5%, is John Aldridge.

They’re the kind of eye-opening stats that Liverpool FC historians Arnie Baldursson and Gudmundur Magnusson trot out on a daily basis.

Because the Icelandic duo – the men behind the phenomenal lfchistory website and authors of the recently released masterpiece the Liverpool Encyclopedia – are a mine of Anfield information.

That 104 matches figure played by Aldridge, for example, is significant.

Arnie and Gudmundur set the criteria for their win ratio at players who have made 100 appearances or more for the Reds.

If you reduce that figure to just 20 matches, the quickly forgotten Fernando Morientes comes out on top with a remarkable 66%.

Which is possibly why Arnie Baldursson and Gudmundur Magnusson set the bar so high.

Because the Icelandic duo have become adopted Scousers and their passion for the Reds is evident.

But how did two football fans from an Arctic island 1,000 miles north of Merseyside develop a passion for the Reds?

They are both too young to recall Liverpool’s ground-breaking first European Cup excursion to Reykjavik in 1964.

As ever, it was a journalist who gets the blame.

“Everybody in Iceland loves the English passion and determination – real tackling and not falling about. It’s similar to how we play football,” explained Arnie.

“When I was growing up watching football in the early 80s I watched Kenny Dalglish – and I received a book about Liverpool written by Derek Hodgson as a present.

“That fuelled my passion really... and now I have written a couple of books of my own.”

But vast in their scope though both books are – the Encyclopedia contains 420,000 words and more than 1,100 images – they pale compared to the staggeringly gargantuan resource that is the lfchistory.net website.

Launched a decade ago, it is now acknowledged as THE benchmark for Liverpool statistics – containing profiles, articles, quotes and pictures from pretty much every player and every match ever played by the Reds.

“It started because we were on the internet looking for a resource about Liverpool’s history, and we didn’t see anything,” said Arnie – now the editor of the site. “We thought ‘somebody needs to do something about that,’ and we thought ‘let’s do it’.

Gudmundur, the site’s webmaster, added: “Then we found out why nobody had done it. It was crazy really!

“So we got some help from people who knew what they were doing and gradually, six months later, we had it complete.”

The site is an organic entity, constantly growing.

“We spend some hours on it every day. There is always something we do to make it better,” said Arnie.

Both men have full-time jobs and created the site as a hobby.

Gudmundur added: “We’ve had some amazing feedback over the years.

“And that just encourages us to do even more.

“Every week we get emails from people helping us out, fans and families of ex-players.

“We want the club’s history to be known.”

Thanks to Arnie and Gudmundur, that history is better known now than at any time since records started to be kept about the Reds.