A debut to remember 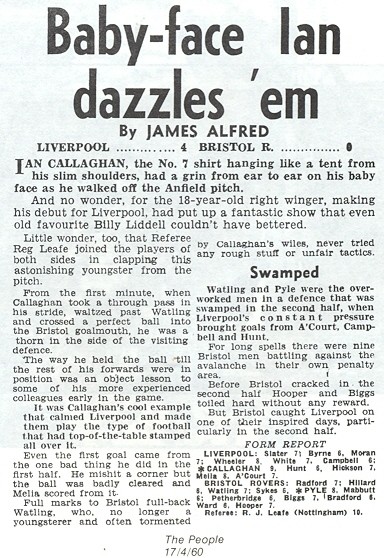 Many players in the history of Liverpool have had great debuts. But one debut stands out from them all. One reason is enough to those who think this was just another debut. The date was the 16th of April 1960. The venue was Anfield and Liverpool was playing against Bristol Rovers. The player in question was Ian Callaghan who played his first of 857 games for Liverpool. A record that still stands and will never be beaten. But what makes this debut stand out from all others? Well, the referee, Reg Leafe, applauded the seventeen year old youngster after blowing the final whistle! Players of both teams also clapped as did the 27,317 crowd.

The reports from the game, give us great insight into this unique occasion. Here´s a selection that brings you back to this glorious day. The People's headline read: "Baby-face Ian dazzles´m." The reporter, James Alfred, goes on: "Ian Callaghan, the No. 7 shirt hanging like a tent from his slim shoulders, had a grin from ear to ear on his baby face as he walked off the Anfield pitch. And no wonder, for the 18-year-old right winger, making his debut for Liverpool, had put up a fantastic show that even old favourite Billy Liddell couldn´t better. Little wonder, too, that Referee Reg Leafe joined the players of both sides in clapping this astonishing youngster from the pitch."

Sunday Express had this headline. "Ian, at 17, has a dream of a debut." Later on the reporter, Tom Ashley, wrote: "And what a debut the boy had. So good in fact that at the final whistle Peter Hooper dashed up to shake Ian by the hand, referee Reg Leafe ran over to give the lad a word of praise, and the 27,000 people stood and cheered him. And Callaghan deserved it, for he had a part in three of the goals."

The local paper, Liverpool Daily Post, was represented by reporter Jack Rowe at Anfield. The headline read "A Callaghan debut to remember." Jack started his report like this. "It is doubtful whether any other young player has made such an impact on Liverpool supporters as the seventeen-year-old Ian Callaghan, who made such a colourful and impressive debut in this match."

Bill Shankly, in his first season at the helm, gave Ian his debut in place of the injured legend Billy Liddell. It was no mean feat to wear Billy´s shirt not to mention on your debut. Ian Callaghan passed the test with flying colours, with the referee's approval!

A good win for Liverpool who were trying to get back into the first division. But the victory will go into the history books for the amazing debut of a future legend about to take over from one of the greatest of them all, King Billy. Ian played only four games this season. The future would hold hundreds of them and many honours. But this was the first. Cally had made his mark!