Dalglish signs in at Anfield 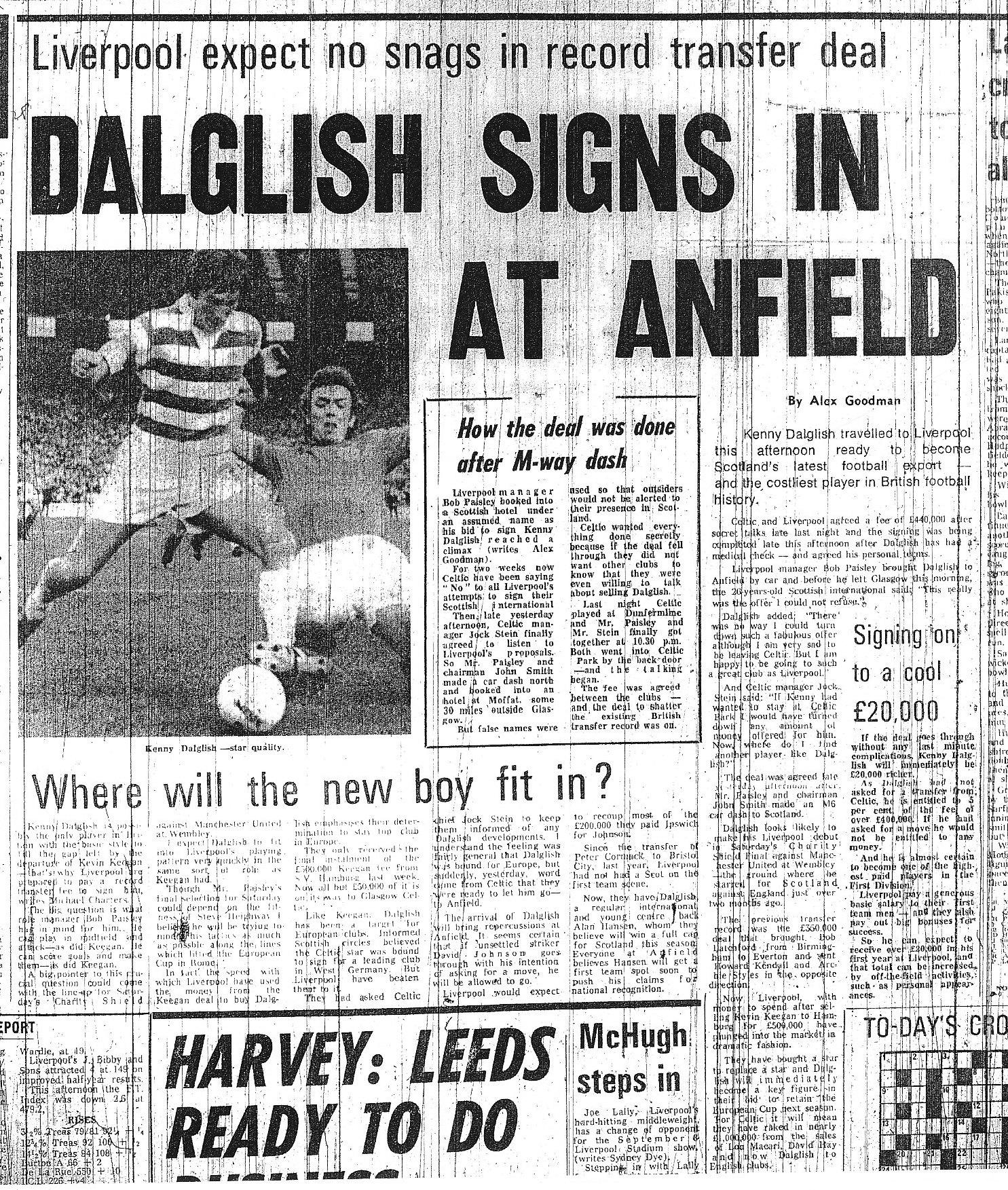 Kenny Dalglish travelled to Liverpool this afternoon ready to become Scotland's latest football export – and the costliest player in British football history. Celtic and Liverpool agreed a fee of £440,000 after secret talks late last night and the signing was being completed late this afternoon after Dalglish has had a medical check – and agreed his personal terms.

Liverpool manager Bob Paisley brought Dalglish to Anfield by car and before he left Glasgow this morning, the 26-year-old Scottish international said: "This really was the offer I could not refuse." Dalglish added: "There was no way I could turn down such a fabulous offer although I am very sad to be leaving Celtic. But I am happy to be going to such a great club as Liverpool." And Celtic manager, Jock Stein, said: "If Kenny had wanted to stay at Celtic Park I would have turned down any amount of money offered for him. Now where do I find another player like Dalglish?"

The previous transfer record was the £350,000 deal that brought Bob Latchford from Birmingham to Everton and sent Howard Kendall and Archie Styles in the opposite direction.

If the transfer goes through without any last minute complications, Kenny Dalglish will immediately be £20,000 richer. As Dalglish had not asked for a transfer from Celtic he is entitled to 5 per cent of the fee over £400,000. If he had asked for a move he would not be entitled to any money. And he is almost certain to become one of the highest paid players in the First Division. Liverpool pay a generous salary to their first team men and they also pay out big bonuses for success. So he can expect to receive over £20,000 in his first year at Liverpool and that fee can be increased by off-the-field activities such as personal appearances.

How the deal was done after M-way dash

Liverpool manager Bob Paisley booked into a Scottish hotel under an assumed name as his bid to sign Kenny Dalglish reached a climax. For two weeks now Celtic have been saying "No" to all Liverpool's attempts to sign their Scottish international. Then late yesterday afternoon, Celtic manager Jock Stein finally agreed to listen to Liverpool's proposals. So Mr. Paisley and chairman John Smith made a car dash north and booked into an hotel at Moffat, some 30 miles outside Glasgow. But false names were used so that outsiders would not be alerted to their presence in Scotland. Celtic wanted everything done secretly because if the deal fell through they did not want other clubs to know that they were even willing to talk about Dalglish. Last night Celtic played at Dunfermilne and Mr. Paisley and Mr. Stein finally got together at 10.30 p.m. Both went into Celtic Park by the back door and the talking began. The fee was agreed between the clubs – and the deal to shatter the existing British transfer record was on.

Where will the new boy fit in?

Kenny Dalglish is possibly the only player in Britain with the basic style to fill the gap left by the departure of Kevin Keegan – that's why Liverpool are prepared to pay a record transfer fee to sign him, writes Michael Charters. The big question is what role manager Bob Paisley has in mind for him. He can play in midfield and attack – as did Keegan. He can score goals and make them – as did Keegan.

A big pointer to this crucial question could come with the line-up for Saturday's Charity Shield against Manchester United at Wembley. I expect Dalglish to fit into Liverpool's playing pattern very quickly in the same sort of role as Keegan had. Though Mr. Paisley's final selection for Saturday could depend on the fitness of Steve Heighway I believe he will be trying to model his tactics as much as possible along the lines which lifted the European Cup in Rome. In fact, the speed with which Liverpool have used the money from the Keegan deal to buy Dalglish emphasises their determination to stay top club in Europe. They only received the final instalment of the £500,000 Keegan fee from S.V. Hamburg last week. Now all but £50,000 of it is on its way to Glasgow Celtic.

Like Keegan, Dalglish has been a target for European clubs. Informed Scottish circles believed the Celtic star was bound to sign for a leading club in West Germany. But Liverpool have beaten them to it. They had asked Celtic chief Jock Stein to keep them informed of any Dalglish developments. I understand the feeling was fairly general that Dalglish was bound for Europe, but suddenly, yesterday, word came from Celtic that they were ready to let him go – to Anfield.

The arrival of Dalglish will bring repercussions at Anfield. It seems certain that if unsettled striker David Johnson goes through with his intention of asking for a move, he will be allowed to go. Liverpool would expect to recoup most of the £200,000 they paid Ipswich for Johnson. Since the transfer of Peter Cormack to Bristol City, last year, Liverpool had not had a Scot on the first team scene. Now they have Dalglish, a regular international and young centre back Alan Hansen, whom they believe will win a full cap for Scotland this season. Everyone at Anfield believes Hansen will get a first team spot soon to push his claims for national recognition.