Review of At the End of the Storm 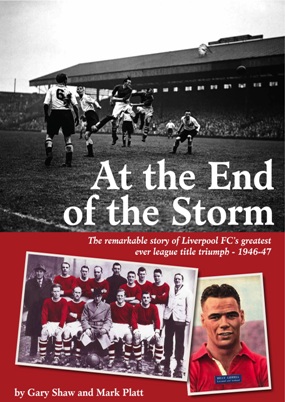 "At the end of the Storm" is a wonderful tribute to the management and players of Liverpool Football Club who won the first post-war championship in the 1946-47 season. Authors Mark Platt and Gary Shaw set the scene in vivid detail. Britain is in ruins after World War II and the Liverpool players' "kit is ragged, faded, darned and mismatched. Their socks are rumpled around their ankles, not because of youthful rebellion, but because they were so old they no longer held up on their own."

People were excited to see League football once again after a seven–year wait. More spectators meant more money for the clubs, yet the players were on meagre salaries, struggling to make ends meet. A players' strike was imminent. A plea was sent to the House of Commons for extra rationing for players since food was scarce.

After spending pre-season beefing up in the States and enjoying the sunshine, Britain was ravaged by terrible weather and the season didn‘t reach its conclusion until June when Liverpool won their fifth League championship in dramatic fashion.

Destined for mid-table mediocrity was the verdict before the season started. "This is Liverpool FC; the team no-one "wanted" last August; the team they decried; "the same old names trotted out," said vexed correspondents. They wrote begging me to take up the strain and cane the directors. They had beaten America and that meant nothing at all for League football possibilities. And here we find Liverpool FC at the top of the ladder." – Ranger in Liverpool Echo. 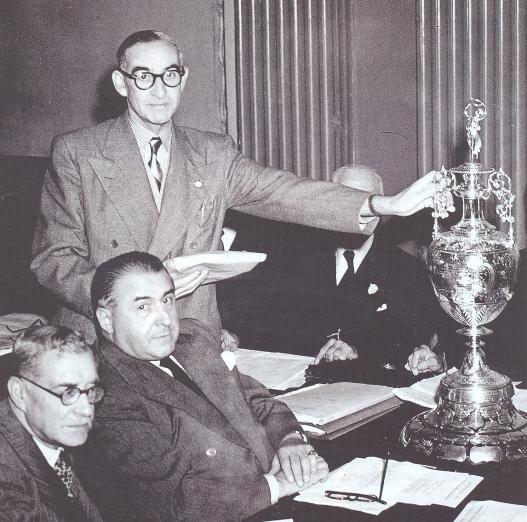 This book is clearly a labour of love with plenty of seldomly-seen pictures, reports from every game and introducing all the protagonists in this epic saga. The authors have taken great care in tackling all the issues at the time that destabilized the players' careers.

This was a unique band of brothers who were known as the "Crazy Gang" as co-author Mark Platt explains in an interview on Liverpoolfc.tv: "From one week to the next you just didn't know what to expect from them, an example being early in the season when they beat Chelsea 7-4 at Anfield, in what was arguably one of the greatest Liverpool matches of all-time. Then, just a few days later, they crashed to a 5-0 defeat away to Manchester United. It also refers to the great camaraderie and team spirit that existed between the players." 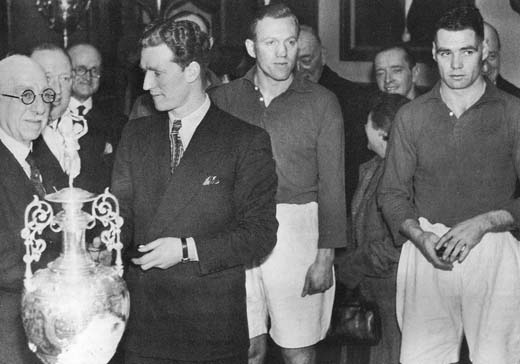 Willie Fagan, Albert Stubbins and Billy Liddell with their medals

To qoute the introduction of this book: "The season had everything; a ground-breaking tour of the USA; league debut’s for Billy Liddell and Bob Paisley; the sensational signing of Albert Stubbins; Jackie Balmer's amazing hat-trick of hat-tricks; long queues and massive crowds; the constant threat of a players' strike; quagmire pitches; frozen pitches; a thrilling FA cup run; the famous 'goal in the snow'; squad rotation; an unprecedented fixture pile-up and a nail-biting championship finale!"

LFChistory.net fully recommends "At the End of the Storm" for afficionados of Liverpool FC's fantastic history or simply if you want to read an adventurous story of men achieving their goal against all odds in the most extreme of circumstances.

At the End of the Storm: The Remarkable Story of Liverpool FC's Greatest Ever League Title Triumph - 1946/47, priced £12.99 can be ordered at the book's homepage!