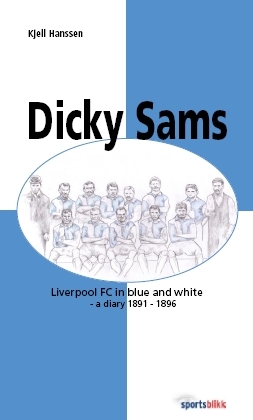 To clear up the title first: "Dicky Sams: Liverpool FC in blue and white", a Dicky Sam was a nickname for a native of Liverpool, so the Victorian equivalent of today’s Scouser.

Peter Lupson’s excellent book "Across The Park" traced the origins of both Everton and Liverpool football clubs and got rid of a few myths along the way. Norwegian Kjell Hanssen has gone a step further. By meticulously going through old newspaper archives, he has come up with a fascinating diary of the first five years of Liverpool Football Club’s existence. Inevitably there is some overlap with "Across The Park" but Hanssen’s book goes into a lot more detail by revealing articles written at the time of the dispute that caused Everton to leave for Goodison while a new club was formed that would continue to use the Anfield stadium.

Kjell Hanssen doesn't write anything himself in the book, not even the usual Preface or Foreword you expect with a historical football book. Although he goes down as the book's author, it might be more accurate to call him the book’s researcher rather than it’s author. In fact he does show himself as: All research and gathering of facts: Kjell Hanssen.

The book has five chapters each covering one season from 1891/92 - 1895-96. Kjell's research means we have a whole new concept about the early life of the club we support. His study of the newspapers at the time is quite detailed and you get the feeling that anything related to Liverpool Football Club 1891-1896 from quite a few newspapers did not escape his attention. It’s obvious that Kjell has done a phenomenal amount of research before getting this book published.

He includes end of season reports for Liverpool FC and which players were kept on and who were not and the book gives valuable information on various players’ careers and why they left Liverpool to seek their fortunes elsewhere. Even though John Houlding was hardly a pauper Liverpool FC didn’t make much money at the beginning and most likely couldn’t offer their players the same "riches" as other clubs. In the club’s inaugural season admission charges were fixed at 4d for first-team matches (Lancashire League) and on rare occasions when a large guarantee might be required, the admission charge would rise to 6d.

When reading the press reports included, one thing you immediately notice is how old-fashioned the writing is. Even if it was fashionable at the time, no modern sports-journalist would write in the same way today. Even the description of some of the goals scored by Liverpool between 1891 and 1896 make you either chuckle or just squirm awkwardly. As examples, take a look at these:

"Ross nipped in on the ball and, dodging Hendry, scored the third point with a beautifully gauged effort."

"Stott sending in a screw shot, which beat the Small Heath custodian."

"Holmes in driving hard out had the misfortune to see the leather cannon off Henderson’s legs into the net."

"One of the visitors’ defence palpably fouled the ball within the dreaded 12 yards’ limit, and McLean taking the kick safely piloted into the net."

Yes, words like leather (for a football) and custodian (for a goalkeeper) were regularly used in reports a hundred and more years ago and would sound quaint today.

All in all a fascinating book for the Liverpool FC enthusiast!

Review by Chris Wood for LFChistory.net