Kenny admits why he quit Liverpool 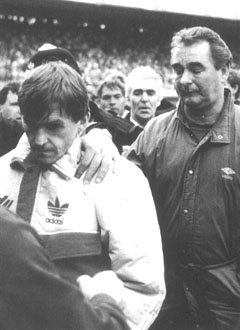 I will never never forget 15 April 1989. I cannot even think of the name Hillsborough, even cannot say the word, without so may distressing memories flooding back. I don’t know how many funerals I went to. Marina and I went to four in one day. All the funerals were harrowing. All those families mourning the loss of their loved ones. Most of the church services ended with "You’ll never walk alone". I couldn’t sing through any of the songs or hymns. I was too choked up. The words could never come out. I just stood there in a daze, still trying to come to terms with what had befallen the club and the people I had so admired. I did what I had to do after Hillsborough, certainly not through any delusions of grandeur.

Although I didn’t realise it at the time, Hillsborough was the most important factor in my decision to leave Liverpool in 1991. I thought to myself ‘Why should I feel any pressure’. The people under pressure were those who had lost their loved ones. In truth, I had wanted to leave Anfield in 1990, a year before I eventually resigned. In the 22 months between Hillsborough and my resignation, the strain kept growing until I finally snapped.

By christmas my body was covered in big blotches. A few even appeared on my face. I saw a doctor nearly every day for injections. He used to come to the ground, bend me over, give me injection in one cheek and send me home like a pin-cushion. I would go to bed, wake up the next morning, go back to the ground and try to start again. I don’t know whether the rash resulted from the general strain. My lack of tolerance towards the children probably upset me even more than it did them. I hated to see the surprise and hurt on the faces of my children when I bawled at them. As a player, I was pretty much teetotal because I was dedicated to my profession but in the period before I resigned I used to drink wine so I could me more sociable with my family. After Hillsborough, Marina began learning about counselling and tried to counsel me. But my family could see how desperately I needed a break, I was unwell and under strain. I started having doubts about myself and my ability to make decisions. In the past I would just make the decision, usually more right than wrong and move on without thinking. Now I agonized over anything.

Against Everton in that famous 4-4 fifth round replay, I was the only person at Goodison that night who knew it was my last game. Before the game, I lay on my hotel bed and decided that I had to get out. The alternative was going mad. Liverpool needed somebody who was going to be authorative, somebody who could make a decision. I couldn’t do that anymore.

The implications of what I had done sank in firstly when I returned home to see the tears on my children’s faces. Then it hit me again when we were coming back from Orlando, and it was announced that Graeme Souness was going to take the Liverpool manager’s job. Of course, I had no right to hope Liverpool would come back to me. Besides at that time I thought Graeme was the best man for the job. But if Liverpool had waited until the summer, and then asked me, I would have gone back. Like a shot. Liverpool will always be in my family’s heart.