For many of us Liverpool supporters Stephen F. Kelly is a name synonymous with some of the most avidly read biographical and documentary literature surrounding our great club.

But if Shankly is the blue ribband amongst Kelly's biography subjects anyone else on the illustrious list of names on his portfolio could come a close second. Alex Ferguson, Graeme Souness, Gerard Houllier and Kenny Dalglish have all fallen under the Kelly scrutiny. So, can these managers, all 'names' in their own way, be compared with one another?

"The one thing they have in common is that they all believe in themselves to the extent of being stubborn. As for differences, well Shankly was an icon who was much bigger than football. He was a great motivator. Dalglish is flawed even though he has many fine qualities. Ferguson has many Shankly qualities but has become arrogant and lacks the Shankly charm and wisdom. Souness was a revolutionary, his own man, who was probably ahead of his time at Anfield. But he's learnt a few lessons on the way. Houllier is more intelligent, wise and cultured. He's a terrific coach, hugely respected and has a good eye for a talented player. But he's probably not as good a motivator as Shanks. Is anybody? And he can be ruthless."

Houllier's appointment at Liverpool was the spark that finally allowed the club to begin clawing back the ground lost in a near decade of slow and painful regression.

In his extraordinary book, 'The Boot Room Boys', Kelly had been keen to keep his own counsel on the demise of that great footballing institution, letting the protagonists speak for themselves without comment or censure. So, having been presented at first hand with all the evidence, what did he really think led to Liverpool's tortuous decline in the 1990s? 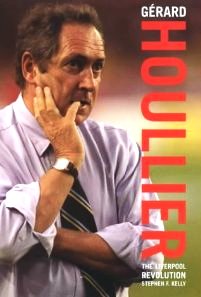 "The turning point was Souness. There was little doubt that football was changing at that time and that Liverpool needed to change as well. Unfortunately Souness went about it the wrong way. The most disastrous thing he did was to sell a whole bunch of players because he thought they were too old. They might have been getting on but they had experience and still had a good few years left in them. In place of them he made some appalling signings, some of the worst players to wear the red of Liverpool in the past forty years. I'll not name names. You can guess."

With the advent of rampant commercialism, player's agents, television deals, and larger more eclectic squads, the lot of a football manager is totally different fare these days to the days when Bill Shankly's figure cast long shadows across the Melwood turf. Are we witnessing the demise of the great autocratic manager, the one man at the helm who did everything himself and ruled with an iron rod?

"I think in the modern game it is far more difficult to be autocratic. You have to earn respect - in the way that Houllier does - and then you can start laying down a few tough rules. Players now hold the upper hand, they're well paid and have everything worked out in their contracts. Ferguson can be autocratic because he's won everything. But it will be more difficult in the future."

Having written extensively about his beloved Liverpool, Kelly is also something of an expert on matters relating to Liverpool's big rivals from the other end of the East Lancs. Road. He has also penned volumes on Everton and Arsenal.

What are the essential differences between the clubs then?

"United are a big supermarket. They are the Sainsbury's of the Premiership. Flashy, expensive, money-grabbing. They transcend local and regional boundaries. Arsenal are the Waitroses, a big local supermarket but not as flashy as Sainsbury's. Liverpool is the friendly family shop on the corner - efficient, they give credit and there are no bloody trollies or check-out queues !" Hmm. I'm not sure Reds' fans will be happy to hear their club described as a corner shop but the point is well taken and confirms the suspicion many of us have of rampant corporate greed running amok through the corridors of Old Trafford.

The glitzy corporate world top flight football inhabits nowadays seems a far cry from the austere post war world of northern England Stephen Kelly was born into in Birkenhead in 1946. Like many of his peers, he went to work in that great engine room of Merseyside industry, 'the docks', finding employment at the Cammell Laird shipyard as a draughtsman. 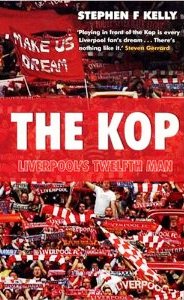 "I hated it. I always wanted to write. Somehow or other I became very involved in trade union work and won a union scholarship to Ruskin college, Oxford. After that I went to the London School of Economics and studied politics. I was writing all the time for various student magazines. After LSE I got a job as a journalist with Tribune and soon found myself writing about politics. Five years later I went to Granada Television as a researcher. I then became a producer and while I was there I wrote a book about unemployment and politics on Merseyside during the 1930s."

That book, 'Idle Hands, Clenched Fists: The Depression In A Shipyard Town', published in 1986, opened the way to his long sought after career as a full time writer. The trademark 'F.' (for Frank) in his name was added to avoid confusion with various namesakes and has remained ever since.

"Purely by chance I then wrote a history of Liverpool Football Club. It was the first time I had ever written about sport but the book was a big success and one book quickly led to another. In 1988 I left Granada and became a freelance writer."

So successful was Kelly in tapping into his reservoir of writing talent that the work hasn't stopped since. Neither has his work been confined purely to footballing topics. As well as the seminal 'Idle Hands', he co-wrote Forty Years of Coronation Street to coincide with the soap's 40th anniversary in 2000 and also revealed a hidden passion with the publication of 'Victorian Lakeland Photographers' in 1991.

"It's about a young lad growing up in Liverpool in the 1960s (i.e. me) and is about LFC, cup finals, trade unions, religion, and love. But it's especially about Bill Shankly who is this great figure guiding the lad's life. I think (I hope) any Liverpool fan will like it."

"I must have gone to see Tranmere on numerous occasions but the first really big match I ever saw was Everton against Manchester United. My Dad was a big Everton fan - he was a close friend of Dixie Dean - and he took me to Goodison. It was a year or so before the Munich disaster. In those days Liverpool were stuck in the second division and if you wanted to go and see any decent sides you had to go to Goodison. Not that Everton were any good, but at least the opposition might be ! So, as a kid, of course I wanted to see a few internationals, and United had plenty of them."

And the 'Kelly's Heroes' of his early childhood?

"I always liked the Spurs Double side of 1960/61 - Blanchflower, White, Mackay, Jones. I was also a great fan of goalkeepers and particularly liked Tommy Younger of Liverpool.

My first Liverpool game was against Sunderland at Anfield. I vividly remember Roger Hunt and Dave Hickson, both with their blonde hair, terrorising the Sunderland defence."

Then Bill Shankly arrived at Anfield, and a new hero was born. To the man who would go on to pen the definitive biography of this new hero football was never quite the same again. So much more than a game. Much more important than that. 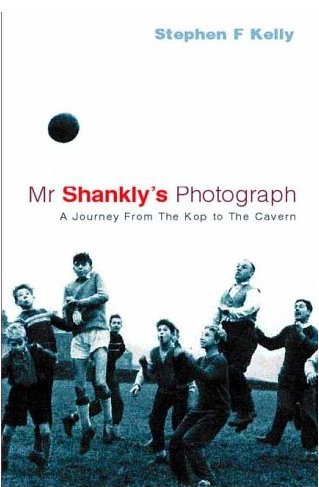 Stephen's thoughts on his new book, Mr. Shankly's Photograph
Q) So, how much of the book is autobiographical?
A) "About 90 to 95% of it."

And the 'photograph', does such a thing exist?
"Ha! I'm not giving anything away. You'll have to work out yourself which bits are truly autobiographical and which aren't. Most of it's obvious, I mean I was born and lived in Birkenhead, worked at Lairds, stood on the Kop and in the Cavern and I did meet Shanks but other than that I'm not telling."

How did you come to write it then?
"The original idea was to do a much larger piece on the city of Liverpool, its economy and the two football clubs but it just started taking a more personal direction. I showed the first chapter to some friends and they encouraged me to carry it through. I was worried the publishers would go ape when they saw the first draft as it wasn't what they'd commissioned but they seemed to like it too."

Is this your first stab at fiction?
"Yes and I found it quite difficult. It was a whole new learning curve for me. It was hard to get the structure right, to make the story flow. It wasn't always easy to take the story where I wanted it to go whilst keeping the plot twists credible. My wife was really helpful here with the odd suggestions, particularly in the later chapters."

Was the fictional Shankly dialogue hard to do?
"Strangely no. It was easy to imagine the kind of things he would say in a given situation. There are plenty of anecdotes and stories about him meeting with ordinary fans, on the streets, around the ground, even in his own house."

The climax of the book will be very poignant to most Scousers, particularly ex-pats who've long since left the city. You were trying hard to say something here weren't you?
"Well yes I was. I think there's a certain insularity amongst Scousers. We tend to think Liverpool is the only place on earth and it can make us inward looking. It's a strength too of course in as much as it breeds a great sense of togetherness but sometimes it's also a weakness. I wanted to make the point that there's a big world out there. But the character in the book (me!) did find it incredibly hard to leave all those years ago and I wanted to acknowledge that."

The book looks ripe for a sequel. When can we expect one?
"Actually there isn't one planned. The ending seemed a natural one to me and I'll probably leave it at that. Besides, I'm going to have a nice long break now!"