A Liverpool view of the Heysel Stadium Tragedy

The following is is a sample chapter from Chris Rowland’s forthcoming book, “From Where I Was Standing: A Liverpool Supporter’s View of the Heysel Stadium Tragedy”. Chris, now in his mid-50s, has attended all of Liverpool’s last ten European finals. The book covers the travels of a motley crew of Reds to Brussels, before events took a tragic turn. ORDER IT HERE. I’ve no idea what the Heysel Stadium is like now; it’s not even called the Heysel Stadium anymore. But on the day that it made history, it was a rickety, ramshackle, crumbling, run-down football and athletics stadium in the north-western part of the Brussels conurbation. Its history involved some Belgium international matches and domestic cup finals and some athletics meetings. It was rarely more than half-full and usually less than that. This time it would be full to its nominal capacity with nearly 50,000 supporters.

Close behind the Heysel Stadium stands one of Brussels’ most distinctive landmarks, the Atomium. Built for the Brussels World Fair in 1958, it’s a huge metallic reconstruction of the atom, rising hundreds of feet into the sky and instantly recognisable to anyone who has driven around the Brussels peripheral motorway ring. For me it remains to this day a stomach-churning memorial to that monstrous night. Just seeing its image, even if only in a brochure or newspaper article, is enough to set off a small hand grenade in my stomach and vividly reactivate all those recollections. But on that perfect late spring evening, the Atomium rose majestically into the vivid blue sky, its metal glinting in the sun’s glare. In the foreground, the flags of the Heysel Stadium fluttered proudly in proclamation of its finest ever moment, the first time it had ever hosted the major European final –– and its last. No scene could have hinted less at the sordid, squalid show that was to follow.

The Heysel was approached by a series of pathways winding through lawns and gardens adjoining the main road. As expected, the entire area was a ring of steel barricades and temporary fencing, each break manned by police with dogs. Here supporters would be checked for alcohol, weapons and valid tickets before being allowed closer to the stadium. Beyond, much nearer the ground, a second inner ring would pick off any who had somehow evaded the first search. At least that was the assumption, and all perfectly customary procedure for football fans. What certainly wasn’t customary on that day was the sight, in full view of hundreds of on-duty police, of several bars open right by the ground and, hardly surprisingly, packed to bursting point. As this was Liverpool’s end of the ground, it was a red and white carnival, with supporters spilling out onto the road and massed on the wall. From inside came all the familiar anthems amidst a cacophony of shouting, foot-stamping and table-thumping.

Throughout the late 1970s and 1980s, pubs and bars by a football ground and inside it were closed on match days, without exception, and especially in Europe when an English club or the national team was involved. It was, on police orders, the (reluctantly) accepted norm. You were lucky if the whole city didn’t close. So to see these bars open, right in front of the police, was a culture shock for us, albeit a very welcome one, and all but unprecedented for such a big game in Europe, defying all logic, wisdom and common sense, and contradicting every assurance from all the authorities. But if life is made up of fixed and variable factors, that hordes of football fans will take advantage of a bar open right by a stadium is definitely one of the former. Leave the chicken coop open and the fox will certainly get in. Despite the strong advice –– rather than enforcement, transparently –– not to open, the lure of quick fat profits was presumably enough for the bar owners to take the risk of damage, disturbance and adverse publicity. That’s market forces for you I suppose –– if somebody wants something and is prepared to pay for it, somebody else will be prepared to supply it, regardless of the consequences. Opening was a decision based on straightforward, calculated self-interest, and, purely from the commercial point of view, a successful one. The profits would more than pay for a few hours of the cleaners’ time. But it was astonishing, in the context of the times and given the high profile of the match, that they were allowed to open, by both the police and the Brussels authorities. We felt like children with our noses pressed against the outside of a sweet shop window who had suddenly been invited inside to tuck in. It was a wholly unexpected opportunity to grab another beer and let rip with some singing and chanting to get in the mood, a last chance to crank up the atmosphere before the match. We weren’t going to miss it. We entered the first and biggest bar. Inside the insane, heaving melee, the mass of bodies had almost fused into a single pulsing entity. Within seconds, our shirts were soaked with sweat and beer that spilled from plastic glasses held on high as people tried to push and worm their way through. The toilets had long since ceased to cope, and a trail ran from them to the pavement outside. The super-competitive business of getting served was only for the grimly determined or desperate, but we managed it. The story of the stabbing had arrived before us, fuelling the tension that hung heavy in the overpowering hot stale air. There also seemed to be any number of obviously forged tickets in existence, wads of them being passed around in tens and twenties at a time, with the instruction: “Get something for them if you can, or get your mates in, or just dump them.” For once, supply seemed to outstrip demand, as handfuls of discarded forgeries were tossed idly aside, fluttering earthwards to be trampled soggy. Forgeries are always an ominous harbinger of trouble; if they work and get people in, they can cause serious congestion. If they don’t, they can cause delays and unrest at the turnstiles or at whatever point the forgery is detected as people are turned away, or try to break through by force, or turn nasty, or get arrested.

With about half an hour left to kick-off, we drank up and left for the ten-minute walk to our end of the stadium. The first security check, the most cursory and superficial of body searches, revealed a disinterest that almost bordered on the insulting to fans from the country that consistently topped the hooligan export league. We did not know yet, but these same security checks at the other end of the ground were failing to detect a replica handgun, which later turned out to be a starting pistol (“Ooh it’s not a gun it’s a starting pistol, OK fine you can bring it in then, no problem”), to be brandished at the height of the carnage by an Italian supporter before a worldwide TV audience of millions. No other security check followed this one. We just passed right through the sets of barricades, police didn’t even stop us or ask for tickets. Suddenly we were on our final approach. Away to our right, we could see part of our crowd in one of the terraces, a vast curving sweep of red and white bathed in sunlight. We followed the signs for Blocks X and Y, past the main stand and up a gentle slope. We didn’t quite know what to make of the muffled thud that soon followed, not crisp enough for a firecracker, not metallic enough for clanging gates, not quite like any of the usual football match sounds.

Suddenly, ahead of us, a group of supporters came clambering over the wall at the edge of Block Z, shouting and gesticulating. At first we assumed it was our lot trying to bunk in without tickets and being turned back. More and more appeared, swarming over the wall and charging down the bank towards us. But as they drew nearer, running maniacally towards us, it quickly became apparent they were not Liverpool supporters trying to get in but Juventus supporters getting out. And they were heading straight for us, at speed, maybe a hundred or more. When faced with a number of rival supporters charging at him, the average English football fan’s experience tells him they are not coming for his autograph.

Phil’s eyes narrowed: “Bloody hell, these are coming for us here –– quick, get a brick or something!” The first group arrived, but just ran straight on past us, wild-eyed, before barging into some more Liverpool fans behind us. One Italian, wearing a silk scarf like a headband, bandanna-style, launched into a bizarre kung-fu routine with circling hands and trilling noises, before sprinting off with the others. More and more followed, all with the same wild demeanour. Most odd, we thought, not familiar with this type of pre-match behaviour, as we continued towards our entrance, completely unaware of the significance of what we had just seen and heard. 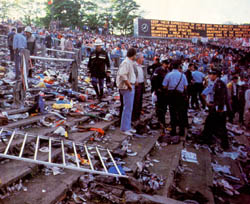 Our first sight of the crumbly stone walls and old-fashioned turnstiles conjured an image of rosettes and rattles, Kenneth Wolstenholme commentary and the old ‘Match of the Day’ theme tune. It was tragi-comic to behold, like a faded glamorous actress long past her prime auditioning for the part of sex kitten. Outside the shabby exterior, an anarchic, unsupervised queue swayed and swirled without pattern as it shoved and pushed and sweated towards what seemed a wholly inadequate number of turnstiles. Many of those forged tickets were being used successfully. We witnessed cash being handed over to turnstile operators who then allowed them in. The sacred match ticket, that took so much hard work to get hold of, seemed to have been relegated to an optional extra for this strictly ticket-only event. In another major departure from convention, there were no police or stewards outside to control the surging swaying mass, or just beyond the turnstiles to check and control the access points. As the pressure at the front of the queues built, those behind were crying out for the pushing to stop –– a chilling foretaste of what was to come four years later at Hillsborough.