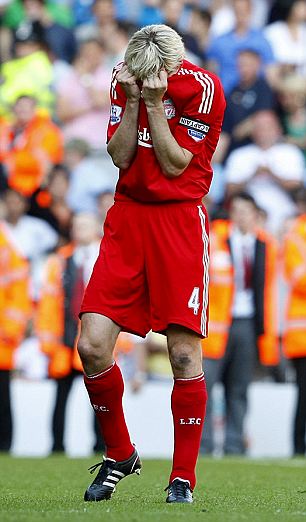 RARELY in his 464 appearances for Liverpool has Sami Hyypia been guilty of letting down his guard.

But moments after the final whistle sounded on his Anfield career, the Finnish centre-back’s characteristic composure for once slipped as the tears welled in his eyes.

On an emotional afternoon, Hyypia was then surrounded by his team-mates, hoisted on to the shoulders of Pepe Reina and given yet another rapturous ovation from the home crowd.
While restricted to just a six-minute cameo, this was Hyypia’s day, the Kop urging “Sami, Sami, Sami, on, on, on” whenever the 35-year-old substitute warmed up on the touchline before his eventual arrival caused pandemonium.

Only a save from Tottenham Hotspur goalkeeper Heurelho Gomes during injury time prevented Hyypia from heading home Fabio Aurelio’s corner and providing a fitting epitaph to a magnificent decade of service.

Legend is a word bandied around too readily these days, but no-one can deny that Hyypia, who was also afforded a Kop mosaic before kick-off, deserves such status having accrued a wealth of honours, the pinnacle of which was the European Cup triumph in Istanbul four years ago.

But those home supporters present yesterday will hope they haven’t seen the last of another hero from that victory against AC Milan.

Xabi Alonso’s future has been the subject of continued speculation despite the midfielder enjoying his best-ever season for the club.

Benitez may insist the player is not for sale, but the manager tellingly stopped short of stating he expects Alonso to be at the club after the summer with Real Madrid waiting eagerly in the wings. Political posturing or trademark coyness? Only time will tell.

Of course, that the focus was solely on Hyypia yesterday was down to Liverpool falling just short in providing the Finn with the one medal missing from his collection; the championship.

Liverpool’s final tally of 86 points was their highest total of the Premier League era and would have been enough to have won 12 of their 18 league titles, based on three points for a win.

That it didn’t underlines the size of the task Benitez faces this summer in giving his squad that all-important final push beyond champions Manchester United.

Although Liverpool’s title challenge floundered on a number of damaging home draws during the winter months, it was the first time since 1987-88 they had remained unbeaten at Anfield throughout an entire league campaign.

Indeed, Benitez’s side have now gone 30 home league games without defeat, their best record for 28 years.

Liverpool lost only five of 55 games in all competition during the entire season, two of which were against Tottenham.

Benitez still probably can’t believe how his side lost the league game at White Hart Lane, but the largely second string’s Carling Cup defeat there a few weeks later begged the question of whether the squad had sufficient strength in depth to win the title.

Ultimately, those doubts were justified. Benitez may rightly believe the first-choice starting line-up needs only fine-tuning during the forthcoming summer transfer window, but scratch beneath that surface and there remain areas with significant room for improvement.

Liverpool find themselves in the same position as in 2002 when they finished Premier League runners-up. Around £30m of new talent subsequently arrived with the purpose of giving the team that final lift; we all know what happened next.

There’s no doubt this will be a hugely important summer for Benitez, but it’s worth noting that this season’s impressive run-in has been forged largely by players who have now been at the club at least 18 months.

Indeed, none of the six major signings made by the Spaniard last season were in the first XI yesterday, with the most expensive – Robbie Keane – lining up for the opposition.

Although Tottenham still had an outside chance of European qualification, there was very much an end-of-season feeling to a low-key fixture.

Liverpool began the brighter and, after Steven Gerrard struck one 25-yard curler on to the roof of the net, Aurelio’s corner from the left was headed down by Martin Skrtel for Yossi Benayoun to hook narrowly over.

The opener eventually arrived on 31 minutes when slack Tottenham defending allowed Gerrard to feed Kuyt and the Dutchman’s deep right-wing cross was headed in off the underside of the crossbar by Fernando Torres.

Goalkeeper Pepe Reina made a good stop to prevent Jermain Defoe from equalising shortly before the break but Liverpool were in control without ever getting out of first gear.

Their second arrived shortly after the hour, Kuyt and Benayoun passing their way through the Tottenham defence before the former’s shot was deflected in by Alan Hutton’s boot.

Keane’s 77th-minute goal ended Reina’s hopes of a third Golden Gloves award and led to the curious sight of Liverpool supporters applauding the Irishman, presumably out of sympathy after his best efforts were never quite enough to persuade Benitez during his brief Anfield sojourn.

Yet victory was assured eight minutes from time when Gerrard fed Benayoun and the Israeli nudged the ball under the body of Gomes.

It was the final act of an afternoon in which the Kop waved goodbye to one legend, while fearing they may also have seen the last of another.