LFChistory.net has been fortunate enough to gain exclusive access to LFC.tv's "60 minutes" interviews in text-format. These in-depth interviews are taped in LFC.tv's studios and are only on offer to LFC fans who have bought an e-season ticket. The fans can also participate by sending in their own questions.

LFChistory.net has transcribed LFC.tv's classic interview with Fernando Torres, which was his first proper interview in English and while he had some difficulties in speaking the language (the main reason why the 60 mins interview is only 30 mins) he comes across as a genuine and a humble person who Liverpool fans can be proud of.

When I played my first game football was my hobby, not a profession. I played football because I loved football. I continued to study because it's not easy to go to the Atletico and Real Madrid academies and get into the first team because there are lot of players from other countries. When I played my first game I felt maybe it could be my career and I can play a lot of games. This was my dream and I am living my dream.

How did your parents feel when you signed as a professional for Atletico?

I think they were afraid because I was 16-17. After 2-3 years I was happy and they were happy. Everybody was very excited, but you don't know what will happen in 6-7 years. I was lucky because everything went well and now I am playing in a very good club, playing in the Champions league and scoring goals.

The biggest influence on your career..

My grandad was a big influence for me. I liked football because of him. He was a big Atletico fan and he watched every game. He spoke every day about Atletico. I like football because of him and my brother as well. He was a goalkeeper and he needed a player to shoot at goal. I was always with him in the park to play football. My mother was always angry because he didn't study and I studied more than my brother.

So you were the good boy and he was the bad boy?

You started out as a goalkeeper as your brother.

I was his little brother and you always want to be as your brother. I was playing goalkeeper with my friends, but it was not my best position. When I lost my tooth my mother said: 'No more playing goalkeeper. You play another position.' [Torres lost a tooth while keeping goal.]

How important have your friends been?

Everybody has a good group of friends. I have 6, 7 or 8 friends from my school and from when I played for Atletico 12-13 years old. It's very important for me. I know they are very happy for me when things are going well. They're always coming over to watch the games at Anfield. They are very excited for the season. It's important for me to have my friends and my family. In the last 4-5 years they have not been able to see me play in the Champions League and now everybody's enjoying it and if they're happy I am happy. 2-3 friends I played with in Atletico didn't make the top level, but I did. They feel if I 'm playing at the top level it's like they're playing at the top level with me and I am very proud of my friends.

At 19 you were made captain of Atletico .. were you scared?

I always wanted to play for Atletico, It was my dream. I was in the acedemy, then in the national team. It's a lot of steps, but I was always very calm. I was too young to be a captain. I didn't have enough experience and couldn't do all things like Stevie and Carra now. It was a big problem for my progression.

Was if frustrating to watch the Champions League on TV while you were at Atletico?

Yes, sure. I saw my national teammates like Xabi or Pepe, Xavi and Iniesta at Barcelona and Raul at Real Madrid. It was very frustrating watching the Champions League. I like every player wants to play in the Champions League and now I can and I enjoy it. 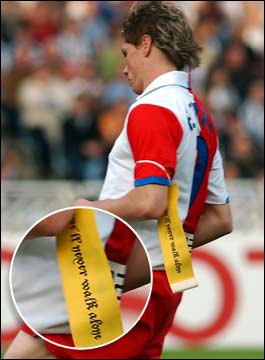 Did you watch the 2005 final in Istanbul?

Yes, of course. It was a big game. I saw the first half at home with my girlfriend and it's 3-0 and then we went to a friend's house and when we arrived it was 3-2 and then they scored the penalty. Atletico fans in Spain are Liverpool fans. They remember the final when Liverpool won Real. After the game when Liverpool won I was very happy for Xabi, Nunes and Luis Garcia.

Tell us the story of your captain's armband..

A good friend of mine does tattoos and my group of friends wanted to have the same tattoo. They decided on: "We''ll never walk alone" like in the Liverpool song. I said I couldn't have this tattoo because I didn't know If I would come to Liverpool and to have a Liverpool sentence is difficult for me. They gave me an armband where this is inside. In one game a photographer took a picture of it and it was in every newspaper. It was a difficult moment, but I knew the real story and that I had a contract with Liverpool was not true.

Now you can have the tattoo..

(Torres shown him a video of fans singing the Torres song) and then asks: When did you first hear the Fernando Torres song?

Maybe before the Newcastle game. The fans are very important for me and I am happy to play for people who enjoy it. I think they love me and I love the fans. It's fantastic. I want everybody to remember me in twenty years. The other day I was with Kenny Dalglish and I could see what he means to the people 20 years after he finished his career. Every player wants to be remembered.

Did you understand the song?

The first time I didn't understand. My friends are very proud because the song is the story of the armband.

Liverpool fans singing the Torres song while locked in at Old Trafford all alone after a game.
(These scenes were part of the video shown to Torres in the studio and he was clearly impressed.)

What about when you see the the fans bouncing on the Kop?

It's very exciting. I like to watch the stand when I score because everybody is being happy and enjoying my goals.

How did your move to Liverpool come about?

Rafa called me. I was walking with my dogs and my friend in the park. My mobile phone showed an English number and I thought it was Pepe or Xabi. On the other side of the phone was Rafa to tell me that he wants me to play for Liverpool. It was very important for me that the manager called me and said I could be an important player in one of the best teams in Europe.

Was it the most difficult decision you had ever made when you had to leave Atletico?

The day when I had to say goodbye to every Atletico fan is the most difficult day in my career because I was there ten years. I think they understand I was going to a big team.

How did it feel to score you first goal for Liverpool?

It was important to score in your first game at home in front of your fans against Chelsea. That moment I knew I was in the correct team and that this team could do very important things.

A lot of pressure on your shoulders because of the record fee...

Normally you can feel pressure, but from the first day here I feel like I stay in a big family. I have to say thank you to my teammates, all the club and the manager to make my first days here easier. Now I feel like at home like at Atletico... Pepe was my friend before I come here. He's very important for me. He's my neighbour and a very good friend.

Can you understand Carra's scouse accent?

In the beginning it was very difficult, but everybody in the streets speaks scouse and I can understand now, not like at first when I didn't understand anything.

Can you speak scouse?

How does it feel being compared to Kenny Dalglish, Ian Rush and Robbie Fowler?

I'm proud, but it's not the right moment. Kenny, Robbie and Stevie have titles, hundreds and hundreds of games and they are legends for lot of years. This is my first season and when I finish my career at Liverpool than maybe this is the right moment. Not now, it's too early. I have only had one good season and Kenny and Robbie 6, 7 or 10. It's very important for me that the fans are thinking like this about me, but thank you, another year.

How has it been to adapt to England?

I like the weather, because it's not a problem for me as my girlfriend and my father are from Galicia in the north of Spain where it's more or less the same weather. I like to play football when it's raining... Normally I stay at home, very quiet. I like the people in the city. They are very polite. Their respect is very different from the Spanish people. It's been very easy for to adapt because the people in the city are very nice.

Yes, before and after every game. I'm a very superstitious player.